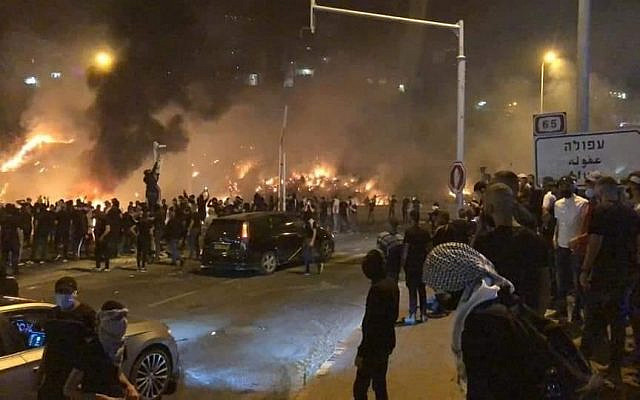 Scenes of rioting in Lod (Photo: Twitter / via Jewish News)

The ‘special’ international Zoom call, on a strategy report from Israel’s mixed cities, barely was under way when Israeli-Arab chief executive Dr Thabet Abu Rass of the Abraham Initiatives vanished from the screen after a rocket from Gaza landed 200 metres from his door.

Moments later, we were told that his Israeli-Jewish counterpart, Amnon Be’eri-Sulitzeanu, wouldn’t be joining as the sirens had sounded over Tel Aviv. Once again Israel and the adjacent territories under the control of the Palestinian Authority and Gaza were a war zone.

For many years I wrote the media monitoring column in the JC – always a thankless task. Journalists (including this writer) are never shy about framing stories and comment through they own eyes. But they don’t much like it when the spotlight is turned on them. When the Middle East is concerned, everyone in the British Jewish community wants a say.

It is often framed by a predominant ‘Israel right or wrong’ view and the ‘terrible’ media coverage. The current conflict has followed that pattern. A counting game is played with contrasting the number of Gaza deaths, children in particular, with the lesser number in Israel. It is only the readership of the Financial Times that has had this explained properly.

The paper detailed how ‘Iron Dome defence keeps Israeli death toll in check’. It noted that in the first wave, some 1,800 rockets had been aimed by Gaza’s Islamic militants at Israel’s major cities, Jerusalem and Tel Aviv.

Some 90 percent of the rockets were intercepted but not enough to protect all citizens, including children, from death.

Another familiar narrative is the different cultural approach to death and destruction on both sides. From Gaza, tragic images are beamed around the world of lives lost, grieving, mutilated bodies and child deaths. No video is too terrible to show. In Israel, even in ravaged mixed cities, the approach is different.

Death is not widely shown and the objective of the civic authorities is to remove the evidence – burnt-out cars and ravaged bodies – as quickly as possible to encourage normality.

No journalist can take any pleasure in the assault on the Al Jazeera tower in Gaza (also housing the Associated Press news agency). It is a dangerous abuse of freedom of the press and the messengers. Nevertheless, one can understand why an over-zealous Israeli commander or right-wing politician crazily might have thought this was a good idea.

The impact was to stir up a hornet’s nest of its own as if the conflagration itself were not enough. Many people in British Jewry have found themselves glued to Al Jazeera for detailed reporting because the coverage of events by other broadcasters has been scratchy.

There is a history of non-governmental organisations and the liberal media condemning Israel’s actions and suggesting international law has been transgressed. The dangers of a rush to judgment are being learned. The BBC website has an analysis by Guglielmo Verdirame, of the Department of War Studies, King’s College London, which examines all angles.

Amnesty International issued a press release headlined ‘Likely War Crimes on Both Sides.’ It argues that the launch of Hamas rockets ‘are unguided and inherently indiscriminate’. But it doesn’t much like ‘the collective punishment of Palestinians’ either. The reality is that Israeli intelligence has tried to warn Gaza residents of impending targets.

As UK chairman of the Abraham Initiatives, which works on a shared society for Israeli-Arabs, I find the most disturbing aspect of this conflict has been the violence in mixed cities, and Lod in particular. Years of work have gone into building relationships and shared spaces for Israeli Arabs and their Israeli Jewish neighbours.

Israel’s Jewish right-wing bullies, through their provocative antics, have stirred up long-standing and justified Arab grievances and sectarian violence and destruction. The reporting of violence from this new front is abhorrent and it may become impossible for neighbours to look each other in the eye again.

If there is a saving grace it is that Israeli-Jewish citizens and the diaspora is reminded that 20 percent of Israel’s population is Palestinian and their rights have been betrayed by the discriminatory Nation State Law.

If that were to be understood better then it could be used to rebuild a patchwork quilt of relationships that have been ripped asunder.