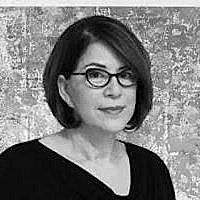 The Blogs
Shula Kopf
Apply for a Blog
Advertisement
Please note that the posts on The Blogs are contributed by third parties. The opinions, facts and any media content in them are presented solely by the authors, and neither The Times of Israel nor its partners assume any responsibility for them. Please contact us in case of abuse. In case of abuse,
Report this post. 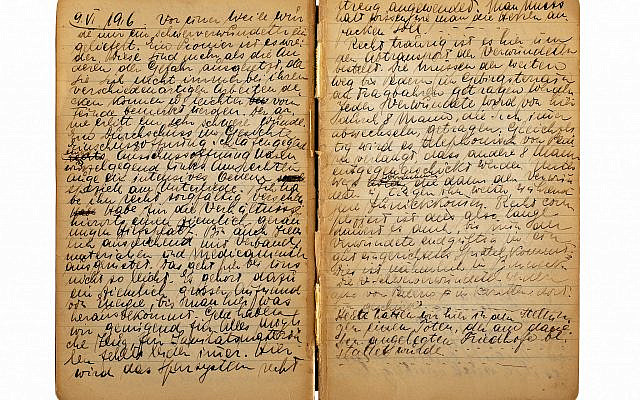 Call it an amazing coincidence.

Glued to black pages of a photo album that had frayed apart, they slumbered undisturbed in a drawer for more than 50 years and when their owner died, they were moved to an old suitcase that got moldy in a hallway closet for 50 more.

What are the odds that the photos, undisturbed for more than a century, would turn up two days after I receive in the mail a hardback copy of the book I had published, The Mountain War, A Doctor’s Diary of the Italian Campaign 1914-1918?

My great-uncle, Dr. Isaak A. Barasch, who served as a doctor in the Austro-Hungarian army, mentioned several times in his WWI diaries that he had a camera and had taken photos. He died of the Spanish Flu in 1918 just months before war’s end, and one of his sisters took his wartime diaries, and as it turns out, his photos, when immigrating to New York City.

No need to spell out what would have happened to them had one of his siblings in Poland taken possession of them.

I knew of the diaries’ existence as far back as I can remember. My great-aunt, Helen Mehlman, had them in her New York City apartment on Riverside Drive.

After she passed away, I had asked her daughter, Irene, to copy a few pages for me. I was curious to know what my great-uncle wrote. She was already in her 80s when Irene realized I was the only one in the family showing interest, and the next time I called, she entrusted them to me. I had them translated from German into English and realized the diaries were a priceless historic and literary treasure or, as the translator put it, “your great-uncle deserves to be bequeathed to posterity.”

The book was recently published by Pen & Sword Books in the UK with an introduction by one of the world’s foremost WWI historians, Sir Hew Strachan of Oxford University who said Dr. Barasch’s insights and prose were extraordinary. 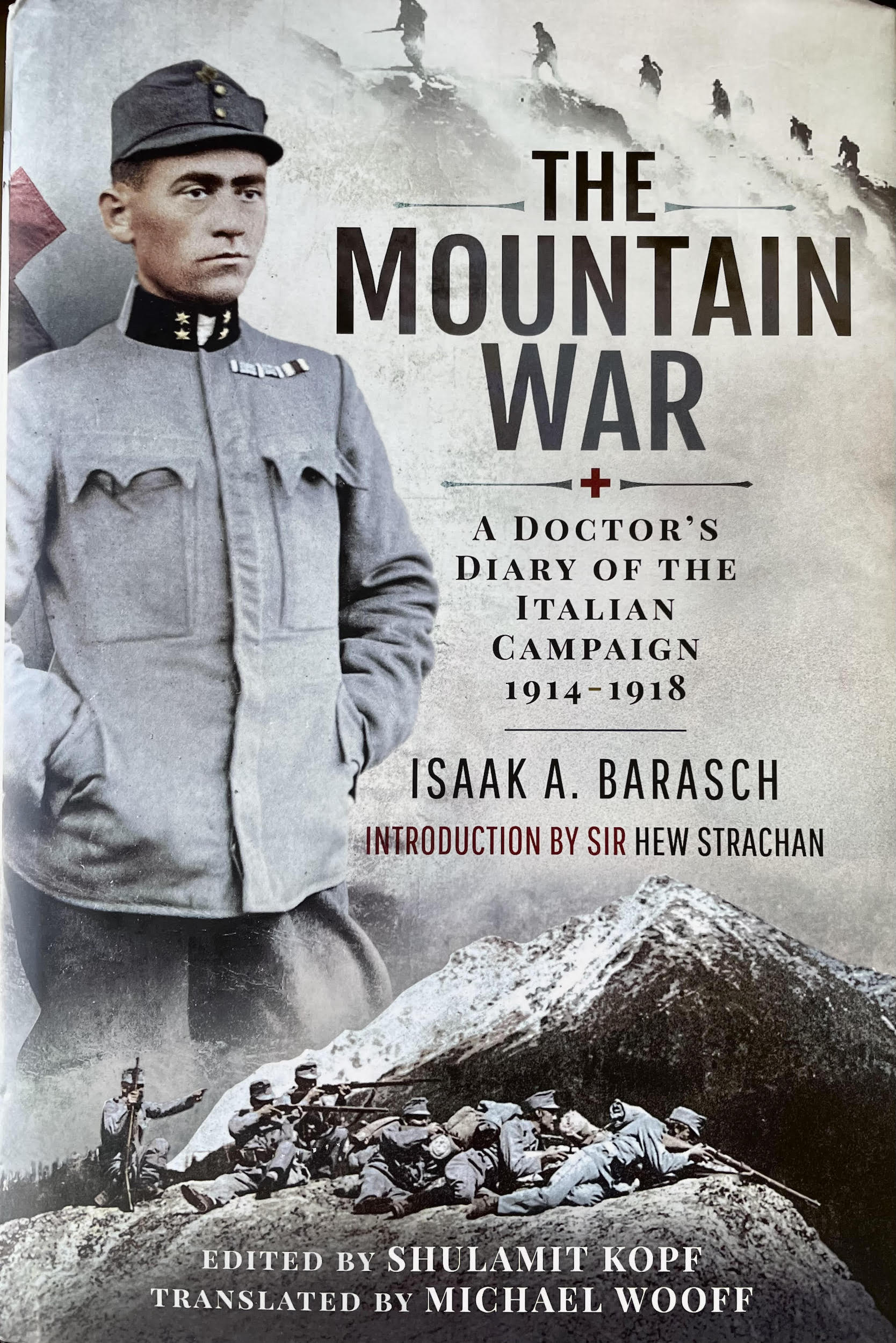 While working on the project I wondered what had happened to the photographs Dr. Barasch had mentioned.

A few weeks ago, I received an email from Helen’s granddaughter saying she had found the old suitcase while clearing out her parents’ apartment.

“Don’t throw anything out,” I said. “Send me whatever you don’t want.”

And so, the box with dozens of letters in Polish and German, documents and photographs arrived two days after the book, or as Albert Einstein said, coincidence is God’s way of staying anonymous. 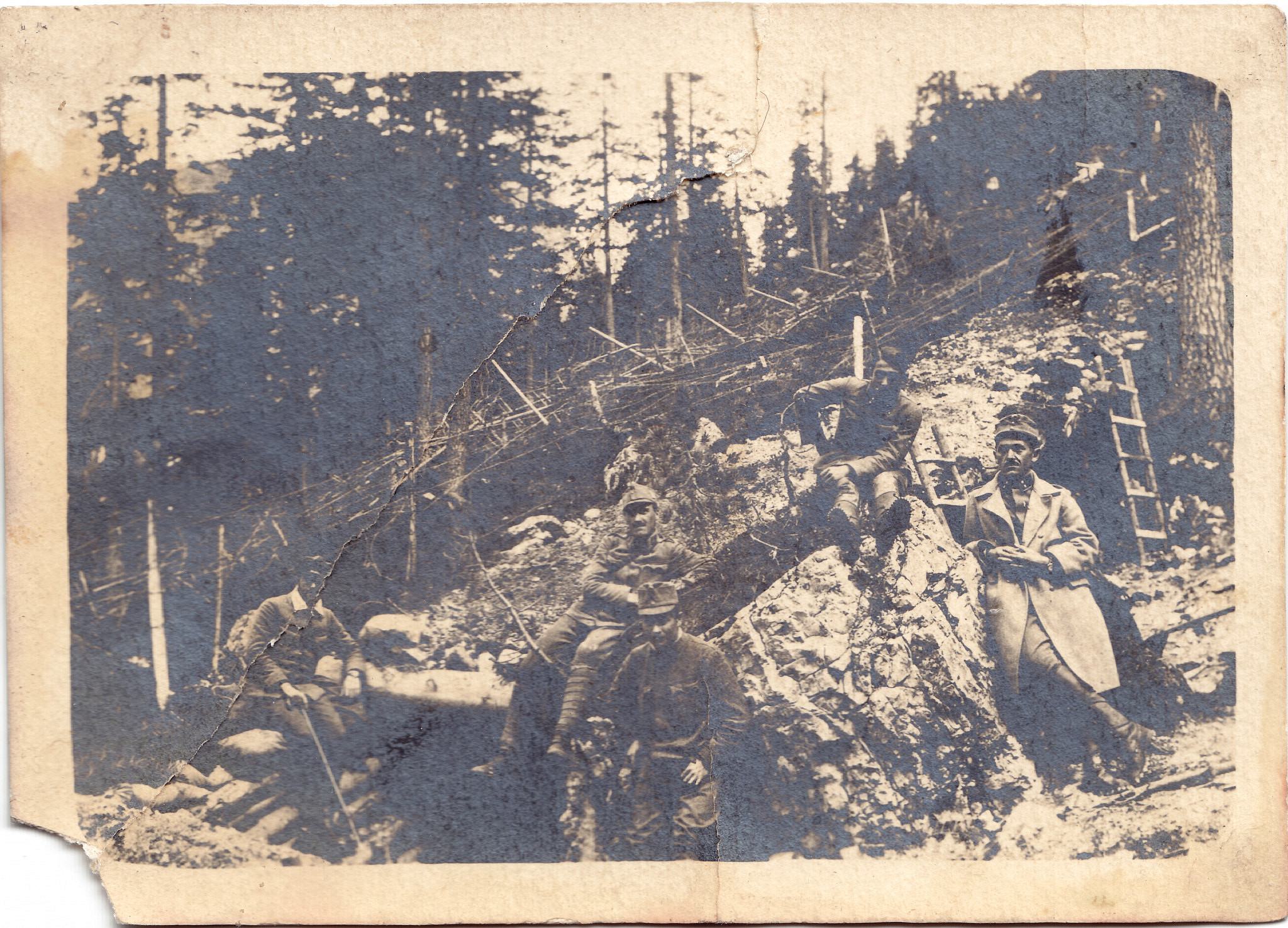 On the bottom of some of the photos my great uncle wrote the place name and date. That made it easy:

We are on the march from Niedersdorf via Welsberg to Bruneck.  We are having a little rest on the other side of Vercha, a very small locality…Here I took a photograph. The soldiers on the march resting with their officers in the foreground…and the mountains in the background. A cool and calm day. The Rienz River accompanies us with its dull and mysterious rushing noise.  The birds are singing prettily. The woods are standing there, dumb and blessed in all their splendor. Deep peace reigns both far and near in the valley of the Puster, untroubled and idyllic. We could almost forget all the horror of this dreadful war, all the nastiness and cruelty which is being played out not far from here, up there in the snow-covered mountains.”

Under a magnifying glass, another photo, badly faded, revealed my great-uncle standing in front of a group of soldiers, all wearing gas masks.

“Today I had to go to Valkiscie for distribution of gas mask to each of the men and the officers in the battalion to be worn during enemy gas attacks and which can save your life in such cases. They serve as air filters containing chemicals that bond with poisonous gases (especially chlorine.) I also got two for myself.”

“We must be prepared for the worst. Nobody here knows if he might be hit in the space of a minute by one of those highly diverse and cruel lethal weapons. Weapon technology has thought of everything. Trinitrophenol bombs, gas, mine-throwers, mortar of every caliber and every type of machine gun, shrapnel and shells of the most varied kind.”

The only change since the day 106 years ago that he wrote those words is the upgrade to the technology for murder and mayhem.

On May 16, 1916, there is a photograph of my great-uncle sitting, arm braced on knee, in the center of a group of soldiers taking a happy break from the war. A soldier in the left forefront is playing a guitar, another, standing to the right, is playing an according and another, a harmonica. Interestingly, Dr. Barasch doesn’t mention this musical interlude, saying only “We are having a little rest in the valley of Salata.”

But the music must have lifted his mood, since two days later he wrote:

“What a really good afternoon I just had! A hot clear day. The whole of nature is bursting out all over hereabouts. All the broad fresh green fragrant meadows… the high-up lushly wooded hills. All the mountain huts … gazing proudly down at you from on high…Here I lay down in the grass. Various flowers…adorn in beautiful patches too numerous to mention all the meadows in which goats and sheep are grazing.”

Usually in the diaries when he mentioned music it was of a different kind, ‘the disgusting devil’s music,’ is what he called the bombardments.

“There are ghostly wails and cracks. One can almost believe that all the evil spirits in the underworld have sworn to do away with suffering humanity. It’s an inferno that not even Dante could find sufficient words to describe.”

“Since midday we have been ready to march. We must cross the Isonzo in this inclement weather. An ice-cold, violent north-easternly is blowing without abating and it is raining heavily—all the streets are deep under water. We are wading through cold water up to above our knees. Sappers are working on building pontoon bridges. Tonight, we are again standing on the bank of the Isonzo and waiting until we can get across. Towards half-past nine it is our turn to march across the narrow and rickety bridge.”

My great uncle was an important witness of the time and his diaries have become prophetic and timeless. He was acutely aware of the lunacy of it all. On the second anniversary of the war, he wrote:

“How much longer must this inconclusive struggle between nations go on? There have already been enough victims for mankind to bear, going on for seven million dead just in Europe these last two years. And then there are the imponderable phalanxes of the crippled and sick. Immeasurable treasures gone up in smoke. Poor humanity for putting up with this! How cowardly you are! Where are your high ideals? Where is your love of liberty? Where are your freedom fighters?… You allow yourselves to be enslaved and led astray so easily.”

He would have seen Europeans led astray once again a few decades later had he survived the war and set up his practice in Vienna which is where he earned his medical degree. And just recently, yet again.

“Happy the man who has been spared it. He doesn’t even know the actual meaning of that one word: war. He cannot even begin to imagine the terrors it contains. Neither does he know the tragedies being played out here daily thousandfold. Nor can he understand the great shame, the immeasurable disgrace this war is for the whole of Europe, for the so-called European culture (how can one still speak of culture? It’s just an empty meaningless word now).

Such a man has never had the opportunity to look into the real essence of human life, to see man before him naked and unadorned, without the superfluous pretty phrases and the conventional claptrap about culture, as only here such things can be seen.”

A tourist Internet site for the Dolomite region boasts of many World War I monuments and cemeteries. My great uncle was there when the row upon row of graves were freshly dug. He knew some of the dead — comrades, patients.

“New graves are appearing daily… Everything all over this region speaks eloquently of the bloody, violent, countless struggles, battles, attacks and counterattacks, all the killing, anger and destruction,” he wrote.

When the latest conflict in Europe ends, there will be new monuments erected to the heroes.

My great-uncle wrote something that should be inscribed on all the grand marble memorials:

“The guns should be silent for once. Mankind needs a rest.”

About the Author
Shula Kopf resides in Tel Aviv. She is a journalist having written for The Miami Herald as a staff writer and as a freelance writer for the Washington Post, The Jerusalem Report, Moment and Tablet Magazines, among others.
Related Topics
Related Posts
Comments