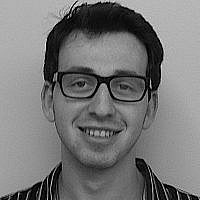 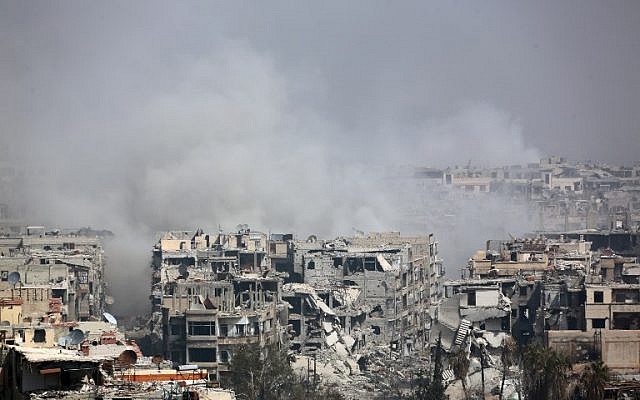 Smoke billows following Syrian government bombardment on the rebel-held besieged town of Harasta, in the Eastern Ghouta region on the outskirts of Damascus on March 12, 2018. (AFP PHOTO)

I recently saw a video on Facebook by the Russian government mouthpiece “In The Now” (a subsidiary of RT News) that featured Rania Khalek, a former contributor to the anti-Israel rag, Electronic Intifada, shamelessly defending the Assad Regime’s merciless bombing of Eastern Ghouta.

Throughout the video, Khalek echoed the Assad Regime’s talking points that the Syrian military can’t be held responsible for any civilians that are killed by airstrikes because the rebels are using them as human shields and that the western media is distorting the picture. You see, Bashar Al-Assad isn’t a bloodthirsty monster committing vast war crimes through a scorched earth policy of combating jihadist rebel forces, he’s a misunderstood teddy bear who’s just doing what he can to keep Syria safe and all of us out here in the west just don’t get it. Give me a break!

Now, I’ll be the first to admit that when it comes to the Syrian Civil War, from a practical perspective, the Assad Regime is the only viable option for an even remotely stable and secular outcome when weighed against the option of a takeover by the “moderate rebels” (Jaysh Al-Islam, the Al-Nusra Front, the Muslim Brotherhood, Ahrar Al-Sham and the rest of that motley crew) BUT that is very different from openly supporting Assad and excusing the very real crimes against humanity that his government has committed. While Eastern Ghouta is held by Jaysh Al-Islam, the rebel group that resembles ISIS to a shocking degree (notably keeping civilians in cages and parading them through the city), that doesn’t give Assad a carte blanche to carpet bomb the city to get rid of them, especially when such actions include indiscriminately bombing hospitals and using chemical weapons. Indeed, the attacks on Eastern Ghouta have been so treacherous that, according to the BBC, in one day alone, more than  50 children were killed and 106 other civilians were further massacred by airstrikes and artillery fire.

What’s so bizarrely contradictory about Khalek’s position on Syria, is that it’s the exact opposite position that she took on Israel’s 2014 war with Gaza, Operation Protective Edge. A quick Google search of Khalek’s tweets and articles show a very black and white position that’s all too typical: Israel is to blame for everything, Hamas is responsible for nothing.

Assad is trying to rid Eastern Ghouta of the rebels that seek to topple his regime. The rebel group in question that controls Eastern Ghouta is Jaysh-Al Islam, a Sunni jihadist group that intends on establishing a strict theocracy in the territory it holds. As you can imagine, it’s not exactly fun to be a woman, homosexual or religious minority in any territory held by this theocratic mob. It’s important to note that Jaysh Al-Islam was never elected to represent the people of Eastern Ghouta, they simply captured the city and have since held the civilian population there as hostages while they continue to attack Syrian military forces.

Conversely, during Operation Protective Edge (as well as Operations Pillar of Defense and Cast Lead in 2012 and 2008 respectively), Israel was trying to neutralize Hamas, the Sunni jihadist group that’s an offshoot of the Muslim Brotherhood, whose members have dedicated their lives to the destruction of the State of Israel and the murder of every Jew living within its borders. And of course, women, homosexuals and religious minorities face continuous discrimination under their rule. While Hamas was elected in 2006, they too have held the civilian population in Gaza as hostages through their policy of executing those who they view as political opponents or “Zionist collaborators,” with no plan of holding any future elections, lest they be held even remotely accountable by the people whose lives they continue to oppress.

Both Jaysh Al-Islam and Hamas are notorious for using civilians as human shields, however, the way in which Israel and Syria have handled this reality could not be more different. Assad has engaged in a scorched earth policy of carpet bombing Eastern Ghouta in an attempt to remove any trace of rebel forces. To the butcher, Assad, human life has no worth and civilian death is inconsequential as he orders airstrike after airstrike. Indeed, sometimes civilians are explicitly targeted, as tens of hospitals have been indiscriminately bombed to increase the carnage, and sarin gas has been used in what’s been noted as the deadliest use of chemical weapons since the Iran-Iraq War.

Conversely, Israel engaged in an immensely targeted wave of strikes on military targets in Gaza. However, to ensure that civilians could escape, Israel dropped leaflets from the sky warning civilians to flee the area and engaged in the tactic of roof-knocking, where they’d lightly tap the roofs of buildings in order to warn civilians to leave the area before the infrastructure would be destroyed by lethal strikes. While schools and hospitals were bombed, that’s only because Hamas was using those locations to fire rockets and store their weapons. Indeed, Hamas was committing a double war crime, doing everything in their power to target Israeli civilians with rockets while also dispersing themselves amongst their own civilian population, effectively using them as human shields, ensuring that the civilian death toll would be as high as possible. In fact, the only reason the death toll on the Israeli side wasn’t as high as the death toll on the Palestinian side is because of Israel’s use of the Iron Dome missile defense system. Israel further illustrated their desire to avoid more civilian deaths by ordering a ground insurgency, moving their soldiers into harm’s way in the Gaza Strip to target Hamas militants on a more individualized basis so as to avoid collateral damage.

While Israel used white phosphorous in 2008 (and should be condemned for such), it’s important to note that they used it as a means to spot military targets, not as a means to murder in and of itself. Moreover, at the time, white phosphorous wasn’t on the list of illegal gasses on the UN Chemical Weapons Convention so it wasn’t technically illegal. Furthermore, it’s nowhere near as deadly as sarin gas. It’s important to note that I’m not defending any of these actions, I’m merely drawing parallels and providing the reader with all of the necessary information so that they can draw their own conclusions.

Ultimately, the main point is as follows, there is no logical reason to defend Assad’s attacks on Eastern Ghouta while decrying Israel’s attacks on Gaza, especially when, all things considered, Israel’s actions are far less sinister. Rania Khalek and her Assadist colleagues (Max Blumenthal, Ben Norton and Ali Abunimah) can’t help but defend the former while using shameful levels of hyperbole to condemn the latter.

While, there is a debate to be had about who bears responsibility for the death of civilians when they’re being used as human shields by hostile militants, that debate ends before it even starts when you give Assad a free pass while viciously condemning Israel for pursuing the same objective.

Indeed, it’s not difficult to see how Khalek and Co wear their intellectual dishonesty and overt hatred of Israel on their sleeve at the expense of all integrity. In an interview on Talk Nation Radio, Khalek accused Israel of intentionally targeting children in Gaza. Khalek further showed her true colours when she and Assadist chum, Max Blumenthal, created #JSIL (short for Jewish State of Israel in the Levant), where they compare Israel to ISIS, with Khalek stating on Mint Press TV that “it’s not difficult [to compare] between what the Islamic State is doing and the Jewish State is doing, the only difference is that one is an actual state that’s recognized.” In a 2015 interview with Glenn Greenwald of The Intercept, Max Blumenthal referred to the Al-Qassam Brigade (Hamas’ military wing) as “resistance” and recounted the tale of their attack on the Nahal Oz Israeli military base in a glowing light. In an article posted on his website in 2014, Ben Norton wrote that Israel had a policy of “decades of incremental genocide” against the Palestinians. In a 2014 interview with Democracy Now, Ali Abunimah referred to Israel’s war with Gaza as a “pogrom” and referred to the Israeli government as “ghetto masters.” In a 2009 article on Electronic Intifada, Abunimah referred to Israel’s actions as “attempted genocide” and Tweeted in 2010 that “supporting Zionism is not atonement for the Holocaust, but its continuation in spirit.”

Where’s the loaded, inflammatory Holocaust rhetoric surrounding the Assad Regime’s actions from these great harbingers of moral authority? Where are the accusations of genocide or the comparison to pogroms? Where’s the concern for the innocent children that seemed to always find its way into every article, Tweet and interview surrounding the last Gaza war? Interestingly enough, all that can be found is the inverse, where Abunimah and Blumenthal accuse those who question their lack of principles as being nothing more than trolls who are paid to harass them by unnamed special interest groups.

It’s jaw dropping to see that the very people who rabidly attacked those who defended Israel’s actions against Hamas now parrot the exact same talking points with regards to Assad’s actions against Jaysh Al-Islam. “They’re a radical Islamist group,” “they use human shields,” “they started this war by attacking a sovereign government,” “the government is defending itself,” etc. It would be hilariously ironic if it wasn’t so sickening.

Now, I’m reasonable enough to respect differing viewpoints on both Gaza and the Syrian Civil War but when there’s such a blatant contradiction between one and the other, it becomes clear that there’s more than meets the eye. This is the very definition of holding Israel to an unfair double standard, but why should we even be surprised at this point? These people have made a career out of demonizing Israel through one-sided, toxic political commentary for their respective “alternative media” outlets. They’ve made it clear that there’s nothing they won’t accuse Israel of doing and there’s no line they won’t cross. While these charlatans have always faced accusations of anti-Semitism, such claims could always be at least somewhat disputed…until now.

Louis Brandeis once famously said that “sunlight is the best disinfectant” and when it comes to the shamelessly contradictory and vitriolic ramblings of the Assadist camp, that quote has never rung so true.

About the Author
Michael Aarenau lives in Montreal, Quebec. He has a Bachelor's of Public Affairs and Policy Management from Carleton University and is currently pursuing a law degree at McGill University. Michael is passionate about human rights, international affairs and justice. For cheeky insights in 280 characters or less, follow him on twitter @MAarenau
Related Topics
Related Posts
Michael Aarenau
Comments