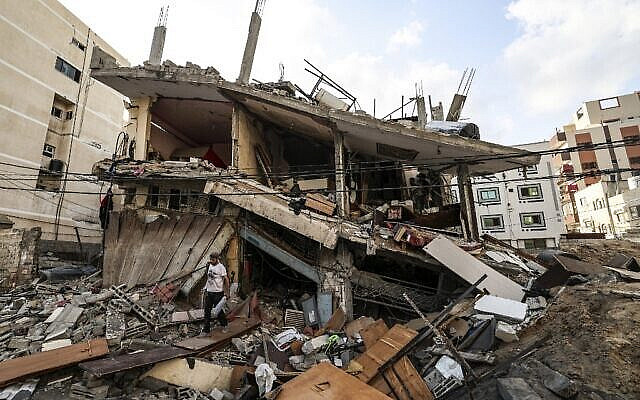 Palestinians salvage belongings from the rubble of their home, following Israeli air strikes in Gaza City, on August 7, 2022. (Photo by MAHMUD HAMS / AFP)

No doubt most people would agree with this. And yet there are two problems: governments do much damage with ill-conceived wars, and they don’t often listen in peacetime either. When it comes to Gaza, they do not listen at all. With Gaza, Israel is in the thrall of a conception, which in Israel’s case is a historic pathology driven by arrogance and a cult of short-termist security; they arise, survive for years and then suddenly collapse.

The original “conception” (this is the transliterated word Israelis use) was that there was no point in heeding Egyptian President Anwar Sadat’s early 1970s saber-rattling and diplomatic probing, since he was less serious than his predecessor Gamal Abdel Nasser and would never dare attack. Iconic Defense Minister Moshe Dayan summed it up by declaring that it was better to possess Sharm el-Sheikh (meaning Sinai) “without peace than peace without Sharm el-Sheikh.” The result came on Yom Kippur, 1973. The conception proved wrong, as the future peacenik Dayan would later concede.

The second conception was that Israel needed to hold on to a “security zone” in southern Lebanon, a strip several kilometers wide snaking along the entire border. Likud-led Israel invaded in 1982 to expel the PLO, a mission accomplished within months; it occupied half the country for another two years and even after pulling out in 1984 (over loud Likud opposition) Israel retained the strip to defend the border against a new enemy, Hezbollah.

The conception said that there was no alternative to the tremendous sacrifice in lives and treasure and political capital, until Ehud Barak unilaterally pulled out in 2000 – his one unquestioned accomplishment (Likud objected again, but was mercifully out of power). It turned out that there definitely was an alternative – not perfect, because there was another war in 2006, but vastly preferable.

The current conception around Gaza essentially holds that Israel has no alternative to the policy in place since Hamas seized the strip in 2006: to blockade it from the air, sea and (with the help of Egypt) land and maintain a balance of terror with the terrorists that rule it.

The justification was that materials entering the strip must be controlled lest Hamas use innocent objects (that might have potential for “dual use”) to make bombs, build rockets and dig tunnels). This would cause misery to the 2 million people living in Gaza and essentially jailed therein, but the plan, to the extent that there was one, was to compel them to overthrow Hamas.

And that seemed like a good plan, because almost any decent person in the world would welcome the overthrow of Hamas, a group that has not only imposed Islamic theocracy and a police state on its miserable subjects but also brought them horrifying ruin by repeatedly provoking its far more powerful neighbor.

Indeed, about the only elements in the democratic world that would not necessarily welcome a Hamas removal are parts of the Israeli right. That is because Hamas rejectionists are their silent partners in opposing a partition of the Holy Land, and their rule in Gaza weakens the more moderate Palestinian Authority and makes the two-state solution less plausible.

What happened to the plan? Well, it has been 16 years now, and despite the blockade Hamas found ways to make bombs, build rockets (with ever-longer range) and dig tunnels. They have fired thousands of these rockets at Israel, creating misery for hundreds of thousands of Israeli civilians in the south especially. We have had four wars and countless “rounds” and  United Nations says that more than 4,000 Palestinians were killed (alongside 106 Israelis), a quarter million Gaza homes were destroyed and $5 billion in infrastructure damage.

Hamas has not been overthrown and it has not backed away from its position that Israel is illegitimate. For itself, though, it has carved out a position as the more reasonable terrorist group of the three or so that fester in Gaza (the second largest being Islamic Jihad, the current round’s antagonist).

The suffering of the people there is not something any of the readers of this article would even contemplate accepting. They have electricity several hours a day (via fuel provided by Israel). They generally cannot leave (the daughter of one of our staff at AP needed to travel to Jordan for medical studies; Israel refused to let her out using various security excuses). They certainly cannot have a beer without risking their lives.

How long can this go on?

I have little quibble with arrests and even preemptive assassinations of master terrorists based on verifiable intelligence of a severe enough danger (though I do wish Israel would more convincingly share the evidence that prompted it to risk another catastrophic conflagration).

I also do not suspect any political motivation, as I did last year when Israel could have been said to provoke a round of hostilities precisely as it seemed Benjamin Netanyahu was nearing defenestration. Prime Minister Yair Lapid is not like that, and if anything his interests will be well served by a speedy end after the modest demonstrable success so far (indeed, there is talk of a cease-fire).

I also understand the reluctance to initiative ambitious reality-changing schemes. Such projects in the Middle East – from the Arab Spring to the Bush Doctrine to, alas, the Oslo Accords – have a way of blowing up in everyone’s faces.

But it is time. I would hope that after the November election, whatever government that yields, Israel takes another look at the outrageous situation in Gaza. Even a cursory glance should reveal that the current strategy is a failure.

What exactly to do is a big discussion. But in general, I would urge a very large carrot be produced and presented before all the world’s cameras. I imagine Israel would find partners in the Gulf and elsewhere for an offer of a genuine Marshall Plan for Gaza that would offer dramatic and total reconstruction and an end to the blockade (including an airport and seaport) in exchange for a return of the Palestinian Authority to the territory. Or perhaps, in another scenario that would serve less well the poor people of Gaza, for an undertaking of long-term non-belligerency (a “hudna”) with Israel.

I have no illusion that Hamas will swiftly hand over the keys in the wake of such an offer, or agree without protracted agony to anything else. It would take some time. It can also be said that the PA is nobody’s panacea. But such a prospect would certainly create a new reality and it would win hearts and minds. Pressure would grow on Hamas to somehow comply.

Nothing and no one is permanent in this world, and permanent Hamas dictatorship in Gaza is no exception – even if it is the conception.