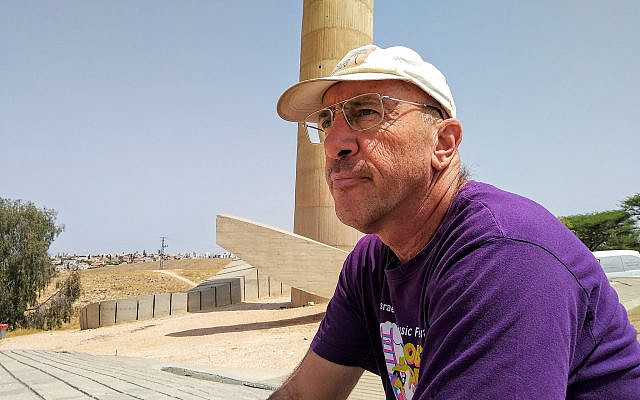 My oldest daughter is not someone you would expect to be a big fan of war memorials. She is a pacifist and a passionate believer in co-existence. Hence it surprised me when she suggested that we visit the Negev Brigade Memorial that pays tribute to the memory of the 324 soldiers from the Brigade who died during Israel’s War of Independence.

But I have discovered that it is always wise when she says, “Abba, I’ve got to show you something,” to respond with enthusiastic participation. I had seen the memorial from a distance a thousand times, driving on the ring road that skirts Beersheva, and even sagely pointing it out to tourists, but surprisingly, I had never actually driven up to this iconic spot, gotten out of the car and visited.

It is a wonderful interactive work of art. You climb through it, on it and over it, you sit in its shade and you meditate in its open spaces.

Of course the elements of the sculpture (or sculptures) are at least partially representative. The perforated tower represents the guard towers of settlements that survived the shelling of the Egyptian army, and the tunnel of concrete represents the water channels that kept the desert settlements alive while under siege. There are appropriate quotes from the Bible and folk songs etched in the concrete as well as the names of the fallen soldiers themselves, and I’m sure for the families of those 324, it is still a somber visit. It recalls the brutal toll that the War of Independence took, when one percent of the country died in a desperate battle of national survival.

But for me, it was a labyrinth that kept adding surprises. I know that it hosts a huge variety of visitors, and I found myself imagining “Treasure Hunt” competitions run by youth movements, or games of “Hide and Seek” played by picnicking families, or local university students enjoying early morning yoga sessions. There is a perfectly spherical chamber made of two identical hemispheres, almost, but not quite, touching each other, that felt more like a temple of peace than a war memorial.

And this is what the Israeli artist Danny Caravan intended. He wanted it to be a place that lived in the present while remembering the fallen. Caravan is no longer with us, but I wonder if he would have smiled at the thought that young lovers come here for trysts. In the popular Israeli series, “Zaguri Imperia,” there is an explicit, slightly comical scene of a sexual encounter in, on, around, and through the memorial that does not seem at all profane. It seems, in fact, to underscore the iconic stature of this memorial as a symbol of the living modern city of Beersheva that has grown from a tiny desert outpost to a sprawling metropolis of a quarter of a million in the shadow of this remarkable work of art.

In 2018, inspired by that very same daughter who always has to “show me something,” I attended the well-known arts festival in the Nevada Desert called “Burning Man.” (Wait, don’t leave, there really is a connection). The 400 large art installations spread out in the Black Rock Desert of Nevada (reminiscent of parts of the Negev) have one requirement: they have to be interactive. If the usual approach to enjoying art is “Look but don’t touch,” the motto at Burning Man is “You must touch!” Climb on, through, over, under and around, operate like a crane, a plow or a musical instrument. Be one with this.

The line that connects Burning Man to the Negev Brigade Memorial is something called the Land Art Movement, an artistic genre that arose in the ’60s and ’70s, and sought to use materials that were closer to nature, in remote venues that blended art with the natural setting, and often dwelled on themes that were closer to nature as well. Today, it would be more common to call it “Environmental Art.” The Negev Brigade Memorial is considered a leading precursor to this approach.

Israel is filled with this kind of art, a combination, perhaps of our enthusiasm for memorials and our enthusiasm for nature. Everyone hikes and everyone remembers something. In 1966, Abie Natan commissioned Yigal Tumarkin’s legendary “Peace Monument,” and plunked it down in Jerusalem in what was at the time a demilitarized zone between Israel and Jordan. In Mitzpeh Ramon, there is a stone sculpture trail that runs for several miles along the edge of the cliff overlooking the Makhtesh (crater).

In the Valley of Jehosophat, between the Temple Mount and the Mount of Olives in Jerusalem, sit three stunning monumental tombs carved out of the mountainside 2,000 years ago while the Temple still stood high above them. This was perhaps the ultimate prototype of “Environmental Art,” because the material is literally bedrock and remains so to this day. There are hundreds of these kinds of statements, gracing our hiking paths like trail markers. We do not need to go to museums to experience art (though we have plenty of museums as well). It is all around us.

My daughter lived in Beersheva for five years, a mere 15 minute walk from the Negev Brigade Memorial, and used to go there with friends in the afternoon, because, as she put it, “It’s the best place in the city to watch the sunset.”

It is this merging of life and art, past and present, solemnity and leisure that moved her to bring me to this place. It’s why I plan to bring others. Certainly, it is a wonderful way to bring people closer to history, and to an understanding of the loss, sacrifice and burden that is the cost of war. Let us hope that the Danny Caravans of the next generation will have more positive themes to dwell upon. 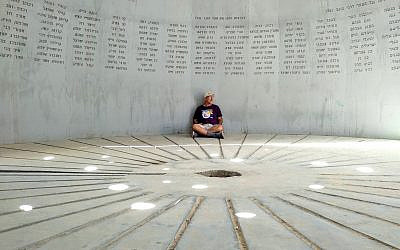 Inside the memorial. (Yahav Erez)
About the Author
Bill Slott is a licensed Israeli tour guide who has hiked and biked the length and breadth of the country. Bill is a member of Kibbutz Ketura, where he has lived since 1981 with his wife and three daughters.
Related Topics
Related Posts
Bill Slott