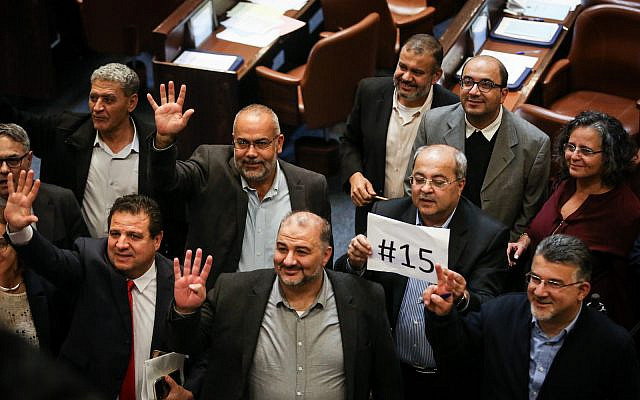 Members of the Arab Joint list seen during a vote on a bill to dissolve the parliament, at the Knesset, in Jerusalem on December 12, 2019. Photo by Olivier Fitoussi/Flash90

Today, as Israel’s citizens go to the polls for the third time in less than a year, they have little in common except one overriding sentiment: a fervent desire to put an end to the torrid ritual of repeated elections with no end in sight. Behind the cloud of uncertainty and the ugly fractiousness that has enveloped this latest campaign there are signs of a potentially seismic shift in the country’s political landscape: the political coming of age of Israel’s Arab community.

In what has developed into arguably the most racist campaign in Israel’s history, Palestinian citizens of Israel have coalesced into a political force that can no longer be ignored. At the end of this unbelievably charged day, they may yet emerge as the new game changers in Israel’s seemingly intractable political puzzle. With them, Israel might yet be able to begin the slow process of extricating itself from its extended political morass; without them it may be doomed to further bouts of interminable turmoil.

The prospect of power-sharing out of necessity, however, will bear significance only if it comes together with the long-overdue legitimacy due to fully one-fifth of Israeli citizens. Then will the remolding of Israeli politics – and the revival of its foundational norms – carry true meaning.

The campaign against Arab voters is not new. It has always been an oft-subsumed part of Israeli elections. If, however, it was long considered beyond the pale (see the prohibition against racist candidates in the wake of the Meir Kahane phenomenon in the 1980s), it has gathered momentum and considerable traction during the past two decades. Avigdor Liberman unabashedly adopted the election slogan: “no loyalty, no citizenship” ten years ago. Netanyahu’s infamous appeal to his supporters on election day in 2015 to go out to vote because “the Arabs are going to the polls in droves” continued this trend with impunity. Throughout the past year, the Likud has flirted openly with Kahane’s successors in the Otzma Yehudit (Jewish Power) party, providing them with that formal legitimacy that had eluded them previously. The ultra-nationalist Yemina party headed by Naftali Bennett contains anti-Arab provocateurs-turned-ministers (Bezalel Smotrich and Rafi Peretz) who spout hatred against non-Jews on a daily basis.

The greatest – and by far the most cynical – offender remains Netanyahu himself. Over the course of the last twelve months he has not missed an opportunity to demonize the elected representatives of Israel’s Arab community, to question their loyalty, to drive a wedge between them and their voters, and to openly delegitimize them. In November, he went so far as to state that the Arab Members of the Knesset are “seeking to destroy the state”. Nary has a day gone by without either he or one of his minions heaping abuse on the Arab citizens of the country. And then came the announcement of the Trump “deal of the century” with a clause intended to sanction the transfer of the entire triangle containing 300,000 residents to Palestinian hands (a revival of the transfer notion first raised by the late minister Rehavam Ze’evi).

Sadly, this noxious trend has been compounded by Netanyahu’s mantra of the last few weeks: “It’s either Bibi or Tibi” (a reference to Ahmed Tibi, one of the leaders of the Joint Arab List and a highly-regarded veteran parliamentarian). Benny Gantz and the Blue-White party, fearful of the effect of this barrage on soft-right voters, succumbed to the hate campaign and announced that he would not form a coalition with the Arab List, thus further fueling the rising ire in the Palestinian-Arab public.

The assault on Israel’s Arab citizens is backfiring: at stake is not only the honor of an entire community, but also the value of equality of rights that lies at the core of any democratic society. That is why the anger it has evoked in large segments of this community – and among many Jewish voters who have refused to sit quietly as this campaign has progressed – is now being translated into a massive effort to increase turnout rates. The objective is to realize what Netanyahu fears the most: a high participation that can deny him and his cohorts another term.

In the April elections just eleven months ago the inability to maintain the cohesion of the Joint Arab list resulted in a real loss of three mandates: the two Arab parties barely garnered 10 seats. The turnout rate was 49%. The lessons of this debacle were quickly internalized. Prior to September, in a climate of growing discrimination, the four separate parties constituting the Joint Arab List reunited and together launched a campaign to bring out the vote. The results were a 10% rise in turnout rates (to 59%) and an impressive hike of three mandates.

The goal now is to move these figures even higher, with an anticipated turnout rate of at least 65% (nearing the national average). This would mean that by the end of the day the Joint Arab List could gain 14 or even 15 seats (these slots are held by women – giving an added incentive for traditional non-voters to go to the polls). In a contest in which voter turnout is a key factor – with every party involved in a last-ditch effort to rally their supporters – these figures can make all the difference. This is especially true given the dissatisfaction of many left-wing Jewish voters who have usually backed Meretz but find themselves disenchanted with its merger with the Labor party and could now supply at least one additional seat to the Joint List (which has been skillfully courting them in recent days).

Rather belatedly, Netanyahu and his allies have come to realize that his unconscionable diminution of Israel’s Arab citizenry may come to haunt him. During the past week he made some futile attempts to highlight his efforts on behalf of Arab citizens of the country and – as is his wont – to spread promises on everything from housing, education, infrastructure and health to increased measures to control growing street violence. But his appearances have been half-hearted and his overtures largely rebuffed. The Arab community in Israel is making it clear that its individual members cannot be courted if their collective identity is denied.

The Palestinian-Arab citizens of Israel have become a political force in the country. Their galvanization on election day may yet prove to be the tie-breaker in an a highly-political system that has rarely taken them into account. As this round’s possible kingmakers, Palestinian citizens of Israel are on the brink of achieving what has eluded them for over 71 years: a share of power in the country in which they hold citizenship.

This achievement will be hollow if it does not trigger more transformative political change – one which is based on a Jewish-Arab partnership based on values of equity, justice and mutual respect. As President Reuven Rivlin so astutely pointed out several years ago: the time has come to move from a country of vying minorities to one of cooperating communities. The onus for the fulfillment of such a vision lies first on the shoulders of Israel’s Jewish majority. Its success depends on the good sense and the good will of all segments of Israel’s social mosaic.