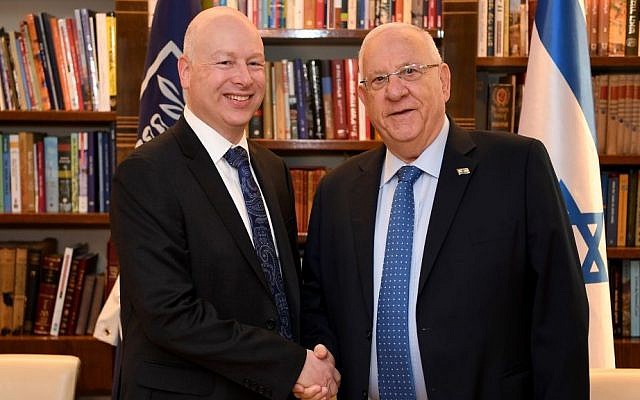 We need to eliminate all the background noise and focus on what really matters. So let’s put aside Oren Hazan’s selfie, however difficult that may be, and try to ignore all the other anecdotes such as Melania’s hand and the state of the renovations at the Prime Minister’s Residence. When all is said and done, last week was a dramatic one in which the tables were turned. As an anchor and reporter for Channel 2 News, in 2013, I stood a few feet away from Barack Obama at Ben-Gurion airport and at Yad Vashem and last week I stood near Donald Trump at the President’s Residence. I listened attentively to both of them and can state that there are at least two major differences between the two administrations.

First, it’s a new Middle East. For so many years we have become accustomed to the flattery heaped on the Arab side and to the criticism levelled at us. Trump has changed the rules of the game. He travelled all the way to Saudi Arabia to confront their leaders and inform them that they must fight terror. He went to Bethlehem in order to look Abu Mazen straight in the eye and tell him: “You cannot promote peace if you finance terror at the same time.” And he travelled to Israel to shower praise on Zionism and Judaism, without any hint of rebuke. It’s true that Obama is more impressive and sophisticated, he is trendier and ‘correct’. In contrast, Trump is awkward and problematic in so many other aspects. Yet, it was the intellectual and progressive Obama who failed and blurred the distinction between good and evil. How symbolic it is that he was awarded the Nobel Peace Prize based only on his oratory and intentions. Then along comes Trump, the most non-politically-correct person imaginable, and spells out clearly and confidently who the enemy is – Iran, ISIS, Hezbollah, al-Qaida, and Hamas. He came to proclaim that Israel is on the opposite side of the equation, the side of good. Trump’s forthrightness was evident when he bluntly referred to the perpetrators of the terrorist attack in Manchester: “I won’t call them monsters because they would like that term, they would think that is a great name. I will call them, from now on, losers because that’s what they are: losers.”

A less obvious aspect of Trump’s visit revealed something highly significant, a new generation of Jews. Jews have held senior positions in every possible administration and government, but they often became totally assimilated into the ruling culture and forgot their Judaism. At a time when assimilation is rampant in the United States, some of the most senior figures in Trump’s administration are proud of their Judaism. Ambassador David Friedman and advisor Jason Greenblatt both studied in Yeshivot. During the presidential visit to Riyadh, Greenblatt could have wined and dined with his Saudi hosts. However, he posted a picture on social media, showing his Friday night Shabbat meal of fruit and crackers. He wrote that he would eat in his hotel room and that he missed his wife and family terribly. This is no mere anecdote, it is a matter of identity.

The high point came when Ivanka Trump stood at the Kotel and shed a tear. She later wrote that this was a “deeply meaningful visit to the holiest site of my faith.” In truth, any picture of a convert standing in prayer at the remnant of the Holy Temple is moving, even if she is not the daughter of the president of the United States.

Their actions sent a clear message to young Jews throughout the word: You no longer have to assimilate to reach the top.