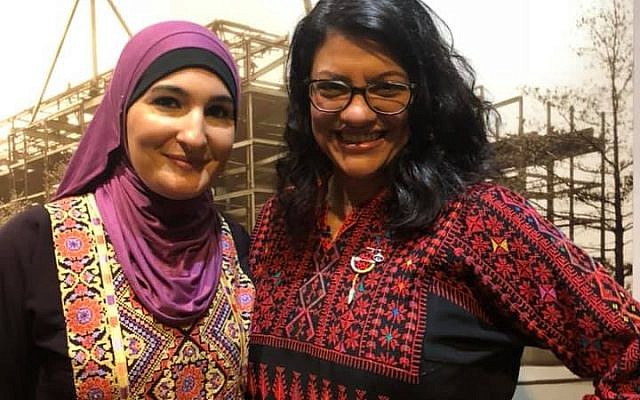 After being sworn into the 116th Congress, Congresswoman Rashida Tlaib doubled down on her campaign platform of impeaching President Trump.  Last night, she said this: “People love you and you win. And when your son looks at you and says, ‘Momma, look you won. Bullies don’t win.’ And I said, ‘Baby, they don’t, because we’re gonna go in there and we’re gonna impeach the mother***er.’”

The Congresswoman is the first Palestinian-American elected to Congress. She is a proud supporter of the BDS Movement, she opposes the Jerusalem Embassy move, she refers to Israel as an occupying force and she has never condemned Hamas for launching thousands of rockets into civilian neighborhoods in Southern Israel. That is par for the course from a Palestinian-American.

I get it – the Congresswoman is upset that under President Trump, the United States has taken a much different stance towards the peace process between Israeli and Palestinians. The President has put his administration and our American flag firmly behind the Israelis, the only democracy in the Middle East.  President Trump decided that it was time to stop coddling the Palestinians – who have been given billions of dollars of foreign aid from our nation and many other nations but yet, 75% of Palestinians are living below the poverty live.

President Trump signed a bi-partisan bill into law called the Taylor Force Act, which calls on the Palestinian Authority to cease making monthly payments to terrorists and their families for the killing of Jews and Americans. The Palestinian Authority has not stopped making such payments and therefore, the United States has frozen all future foreign aid payments. The bill is named after Sgt. Taylor Force, an American, who was stabbed to death by a Palestinian terrorists for one simple reason, he was an American.

I, like many Jewish-Americans are hopeful that we can achieve an everlasting peace in Israel, between Jews and Arabs. What many don’t know is that there are many places in Israel where Jews and Arabs are living side by side in peace.  There are over 1.6 million Arabs who have chosen to live as Israeli Arabs, they are citizens of the Jewish homeland, Israel.  So the question has to be asked, if they can coexist with Israeli Jews, then why can’t the Arabs in Gaza and West Bank do the same? The answer is pretty simple. Hate. They have hate in their heart. The same type of hate the Congresswoman Tlaib has in her heart towards Israel. Hamas teaches their children from a young age to hate Israel, Americans and Jews. They teach that becoming a shahid is the moral obligation of their people. Hamas sends their women and children to the Gaza border and puts them directly in harms ways for political gains. Israelis don’t put their women and children in harms way. Israelis don’t teach hate at 3 years old. The difference between Israelis and Hamas couldn’t be more clear.

Congresswoman Tlaib – I congratulate you on becoming the first Palestinian-American woman to be seated in the United States Congress. I look forward to watching you introduce anti-Israel and pro-BDS legislation, only to find that it won’t even be referred to a committee. I suggest you focus on serving the needs of your constituents and not the hate in your heart towards Jews and the Jewish Homeland, Israel. P.S. – President Donald Trump is the 45th President of the United States of America and he stands with the Jewish Homeland today, tomorrow and forever!