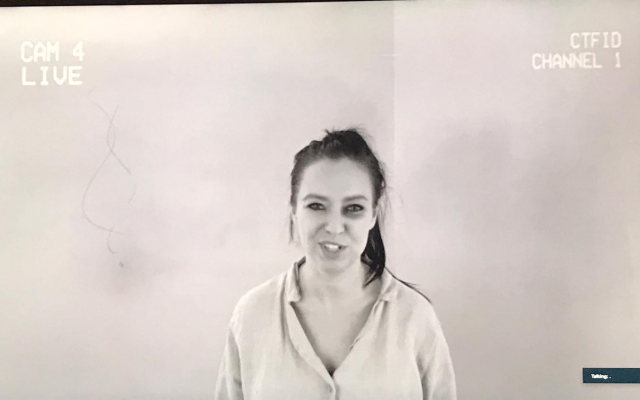 Last night, I received an invitation to the Jaffa International Theater Festival, or Jaffa Fest 2020, to watch ‘The State Against Natasha Banina’. Like many conferences, lectures, or performances this year, it took place entirely online.

We didn’t have evening plans so Daniela and I thought it would be a nice idea to check-in. It had been months since we planned an ill-fated trip to the Tel Aviv Museum of Art to view the Jeff Koons exhibition so we were craving some culture. At the time, I wrote about the efforts we should make to continue seeing art despite these darn lockdowns. Nine months later, our art has adapted to be consumed in the comfort of our homes. In fact, that’s where this play thrives.

It took place entirely over Zoom. Not as a means to broadcast a play but as a way for audience members to interact with ‘Natasha’. As we logged in to our group chat, we were informed by someone that a 16-year-old Russian girl has been accused of manslaughter – and WE were responsible for acting as the jury. We were also encouraged to keep our cameras on (but muted) so it could be as immersive as possible.

I figured it was a nice gimmick, and so we opened a bottle of wine as Natasha, played by Daria Denisova, appeared on our screens via her jail cell. She welcomed us as we settled in for the performance. For a moment, I thought the entire performance was pre-recorded, similar to what London’s National Theatre used to do pre-COVID-19. Then she started calling out our names to see if we were listening to her.

“James Spiro. Are you listening?” She asked me as the performance started. Well, as my ears perked up and I sat up straight in my living room, for fear of being rude, I started to listen.

As she tells the story, graphics appear on the screen helping illustrate her words. For example, she would draw a cigarette on the wall and smoke appears on the screen. Or she would draw a tap and pretend to twist it, making hearts digitally drip out. There were a few cameras set up in the 1.5m x 3m space so different cuts and angles would make sure we remained engaged throughout the show.

The 50-minute live-streamed performance took us through Natasha’s life: “from her childhood in the orphanage, through the world of crime, to this very day.” As she talks to us – her jury – we then need to decide if she had in fact killed someone. It was an online interactive experience, unlike anything we had seen before.

I thought she was guilty and Daniela thought she wasn’t. With only a few seconds to bicker between ourselves, we quickly voted on the screen to decide Natasha’s fate. I won’t tell you what we voted, nor will I share how the jury of a 35-member audience swayed, but our response fell in line with ‘roughly 90% of other audiences’, according to the director who spoke with us in a Q&A afterward.

It’s been a strange nine months. As the world locked down we made efforts to adjust our lives to see our art, last night was the first time we experienced art that had been created specifically in the COVID-19 era. Something like ‘The State Against Natasha Banina’ had been adapted from a one-woman show into an immersive Zoom call which was far more interesting than most of our office calls we’re stuck on all day.

Jaffa Fest 2020 is running until December 8th and it is highly recommended to catch one of its performances while you can. The lockdowns may not last forever, but this new form of art is here to stay.