On October 15, 1986, the day before my birthday, I had dinner in New York with my friend Rena Frank. We had known each other since 1980 through Project Dorot, which connects volunteer visitors with the Jewish elderly. I joined soon after I had moved to New York follow my graduation from Princeton University. Rena gave me a present, a massive bound set of pages of heavy-stock paper. She wrote inside, “The art of life is to know how to enjoy a little and endure much. May you have only happy thoughts and memories when you open this book.” Rena, a Berlin native trained as a nurse at the Jewish Hospital, immigrated to London in 1938 and New York in 1952; she knew about enduring and surviving. 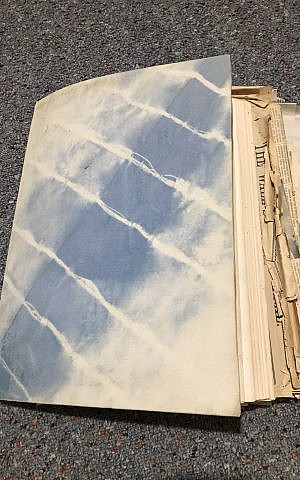 The Book of Life, 36 years on. Photo by Van Wallach.

On the page after Rena’s note, I wrote, “Inscriptions in the Book of Life,” a term with meaning at Rosh Hashanah. In fact, I call the volume the Sefer Ha-Chayim, the Book of Life. I wrote the first entry the next day, October 16, 1986.

I decided to write in the book only on New Year’s Days and birthdays. At first I limited entries to one page per day, and then a half-page for each day, once I realized I would run out of space after 40 or so years.

The entries roll on with upbeat passages of resolutions, mostly of the mundane exercise more, read more books, make more money type; observations on the world events of the day; and unvarnished reports on life’s challenges: love sought, lost and found, marriage, leaving Brooklyn for Connecticut, parenthood, unemployment, 9/11, divorce, economic crashes, job losses, the search for stability. Rena’s hope—that the book contain only happy thoughts and memories—could never be the only reality.

The entries don’t get any tougher to read than that of New Year’s Day 2002. I wrote this a few months after being laid off from my job as an editor for a consulting firm, losing a college roommate on 9/11 and plunging into the process of divorce:

A year of catastrophe ends, a year of change, at the least, begins. What will I say, or be, or think, or do a year from now is impossible to predict. It cannot be much worse, barring illness, than the year now buried. No job interviews to look forward to. I grind my teeth in the frustration of our life. 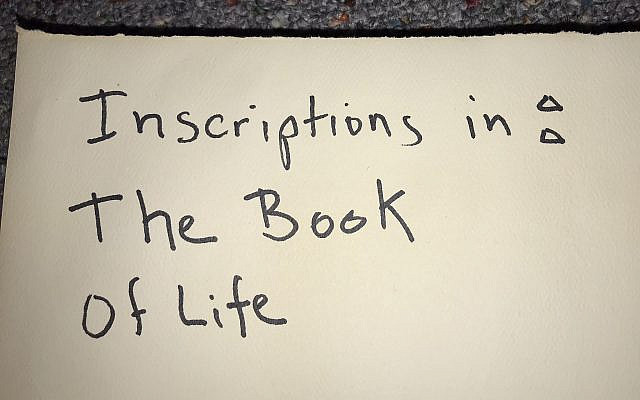 What I wrote, October 1986, photo by Van Wallach

But then, October 16, 2002, I recorded glimmers of hope: “Wow, lots to report since the last entry. New job at KPMG since February 18, and a new apartment in Stamford since October 2. Sam (my son) is here tonight for my birthday.”

The book’s structure of two entries per year creates a storytelling dynamic that I enjoy. The months-long leaps in time give me a historical sweep that differs from writing every day. January 1 always marks a fresh start, what adventures and affirmations await me! On January 1, 2020, I wrote, “The year-decade is off and running as I made good progress on a names-oriented open-mic piece, texts with Sam and call with Cooper (my brother), episode of Mrs. Maisel tonight.”

Boy, did I sound pumped about 2020. Well, we know what happened in that year. But I’m still here and now we’re on the cusp of 2022. I’ll do my annual New Year’s entry, with news about writing projects, family members and friends, the endless pandemic, the clash of civilizations—the raw materials of historical interest. I have four pages left, enough for eight years, which will get me to 2028. God willing, the last entry will be on my 71st birthday. After that, who knows? Maybe I’ll start a new Sefer ha-Chayim and I’ll dedicate it to Rena, who wished me only happy thoughts and memories. 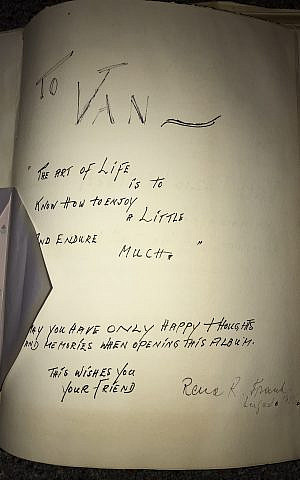 Rena’s inscription, photo by Van Wallach.
About the Author
Van "Ze'ev" Wallach is a writer in Westchester County, NY. A native of Mission, Texas, he holds an economics degree from Princeton University. His work as a journalist appeared in Advertising Age, the New York Post, Venture, The Journal of Commerce, Newsday, Video Store, the Hollywood Reporter, and the Jewish Daily Forward. A language buff, Van has studied Spanish, Portuguese, Russian, Yiddish and Hebrew, although he can’t speak any of them. He is the author of "A Kosher Dating Odyssey." He is a budding performer at open-mic events.
Related Topics
Related Posts
Comments