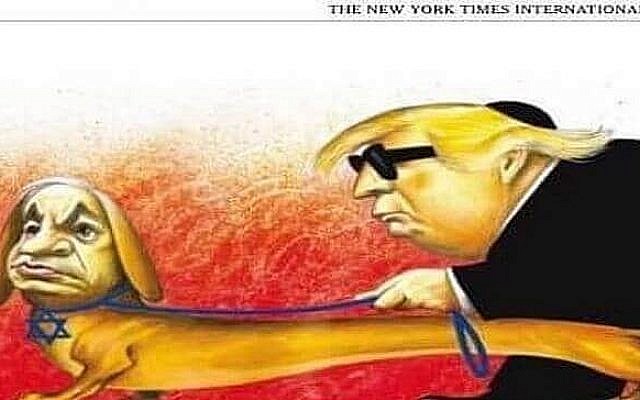 In recent years, The New York Times has become a paper of choice for critics and haters of Israel. Its relentless and ritualistic condemnations of the state and its whitewashing of Palestinian crimes have aroused the ire of those who care about balance and truth in journalism. It is therefore no surprise that a few days ago in its international edition, a cartoon appeared that would not have been out of place in the hostile Arab press. It depicted a guide dog with the face of Benjamin Netanyahu leading a blind President Trump who was wearing a black yarmulke.

The meaning is abundantly clear. The gentile President, for all his power and might, has not been pursuing America’s own interests but Israeli ones. Israel, the Jew among nations, has been deceiving and manipulating a ‘dumb’ American President, and his country, by making it kowtow to a foreign power. The idea of wily Jews deceiving gentiles in order to gain control over foreign governments is textbook antisemitism straight out of the Protocols, and the trope is instantly familiar to those who have studied the history of anti-Jewish prejudice. The paper’s editors issued a forthright apology and promised changes but without providing any explanation as to why such an offensive image was allowed in the first place.

A key reason is that the cartoon’s central premise, that America blindly follows Israeli interests to the detriment of her own, has become increasingly mainstream in recent years. It is common to hear commentators on the liberal-left lament the supposedly manipulative influence of the pro-Israel lobby and its purportedly vice like grip on western politics. It is one of the central premises of Walt and Mearsheimer’s book on the Israel lobby and it can be found in the polemics of Noam Chomsky and other radicals, many of whom have a cult following on the left. More recently, there were the disturbing comments made by Congresswoman Ilhan Omar whose criticisms of AIPAC alluded to antisemitic tropes of dual loyalties.

But the premise is also false in at least two respects. Firstly, America’s Middle East policies have not always been aligned with Israeli interests. There are many illustrations of this: America’s strong support for arming Saudi Arabia, including the sale of AWACS in the 1980s; President Bush Snr. holding up $10 billion of loan guarantees to Israel after the first Gulf war; the 2003 war against Saddam Hussein when much of elite Israeli opinion believed that Iran posed a bigger threat to the region; the decision of President Bush Jr. not to attack Syrian nuclear facilities; the consistent failure of US Presidents to move the American embassy to Jerusalem; President Obama’s criticisms of settlement policies and his refusal to bomb Iranian nuclear sites, together with the flawed nuclear arms deal in 2015. These cases, far from illustrating the omnipotence of the Israel lobby, point instead to its limited influence over US foreign policy.

Secondly, when Washington’s policies meet with Jerusalem’s approval, it is not because America is ‘seduced’ by AIPAC or led blindly by an all powerful Netanyahu. It is because pursuing a pro-Israel policy is in the country’s foreign policy interests. American politicians recognise that Israel has thwarted the nuclear aspirations of rogue regimes, including Saddam Hussein’s Iraq, Baathist Syria and Iran. Thus without Begin’s attack on Osiraq in 1981, the US and its allies might have been forced to confront an atomic armed Iraq in the first Gulf war.

America’s defence establishment has also learnt valuable lessons from Israel’s counter terror strategy, which includes targeted assassinations, urban warfare and the use of technology such as the unmanned aerial drone. Above all, Washington recognises the vital importance of Israeli intelligence in providing information about shared enemies. Air Force intelligence chief, Gen. George. Keegan, once said that Israel’s assistance in discovering Soviet Air Force capabilities and weapons could not have been procured ‘with five CIAs.’

The Israel-US alliance is about many other things, including trade, culture and shared values. But crucially it is a relationship that, for all its occasional tensions, serves both sides very well. What a shame that The New York Times has fallen prey, not just to ignorance and lies, but to the foulest prejudice.