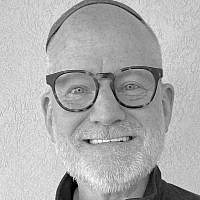 The Blogs
Neil Cooper
Apply for a Blog
Advertisement
Please note that the posts on The Blogs are contributed by third parties. The opinions, facts and any media content in them are presented solely by the authors, and neither The Times of Israel nor its partners assume any responsibility for them. Please contact us in case of abuse. In case of abuse,
Report this post.

A small but important change will be the result of a bill which will soon be put before the Knesset. This change affects those who immigrate to Israel, admitted in accordance with the Law of Return, to live, to work, to pay taxes and to serve in the IDF. Most identify as Jews. Yet, despite their identity and commitment to Israel, some do not meet the halachic requirements to be considered Jews. For that reason, they have lived in Israel in a category which, by definition, places them outside the mainstream of Israeli society. They are referred to as “Others”. The modest, but significant, change suggested would have this cohort referred to as part of the Extended Family of Jews. I like this suggestion for two reasons. First, this small change acknowledges the Jewish identity cherished by those in this group. But there is here, as well, a reminder that as members of our extended family it is our responsibility to take care of them as family.

I see this newly formulated designation as the first step needed to embrace our extended family. In it one senses compassion for those who have been previously marginalized. But the small change does little to move these members of our extended family to the center of Jewish Life in Israel. As an American, Conservative Rabbi, I feel compelled to express my frustration and disappointment over the fact that the State of Israel has not yet found a way to help those who come to Israel, for all the right reasons, find a way to become fully-accepted Jews. Beyond bestowing upon them a name which includes the word Jew, for the sake of those willing and anxious to convert, for the sake of the State of Israel, we need to establish reasonable and attainable standards for full membership within the Jewish People.

While leading my current congregation for over thirty years, I have become deeply involved in the process of conversion in the Greater Philadelphia area. I have stewarded hundreds of people through their conversion to Judaism. The conversions which I and my colleagues oversee include a year of study, explicit directions for Shabbat and Kashrut observances, synagogue attendance and participation in a host of community-wide events. Conversion in Philadelphia, for all streams of Judaism, culminates with immersion in a kosher Mikveh, one which I built for the community and, since its inception twenty years ago, I have supervised. Our conversion candidates are sincere and great lovers of the religion which they now call their own. Moreover, I cannot recall any candidate for conversion who has not expressed support for and interest in the State of Israel. And yet, with all that, few consider aliyah.

This is unfortunate and personally distressing, but I cannot, in good conscience, encourage aliyah for converts who will not be considered Jews when they arrive in Israel. True, the Ministry of the Interior considers these converts as eligible to live in the State of Israel. But any attempt to be formally welcomed as Jews in Israel is simply rejected by the Rabbinate. Neither marriage nor burial in a Jewish cemetery, both under the auspices of Israel’s Chief Rabbinate, are available options for this group. This unwillingness of Israel’s Rabbinate to accept as Jewish those who convert to Judaism is both an afront to these people and to those of us who have worked so hard to legitimately welcome them into the fold.

The issue of the delegitimization of those of who are judged as inferior, less-than equal or, simply unacceptable, is painful for American Jews and their rabbis to hear. When that process of denigration extends to those who have been taught by their rabbis mitzvot, Hebrew, Torah and Prayer, the refusal to recognize these rabbis as rabbis does nothing to help the State of Israel, nothing to engender support for the Jewish State in the US, and nothing to enhance the status and strength of Zionism in the Diaspora.

In his article which discusses this new bill (Times of Israel Blog, Jan. 16, 2022), MK Elazar Stern notes correctly that: “The last great reservoir of potential aliyah is from North America. In the event that increasing numbers of North Americans ever seek to make aliyah, Israel will surely see an influx of those who are intermarried, or are the children of intermarriage.” In addition, I would hope that our converts will also be included in the next wave of immigrants to Israel.

Later this year, my wife and I will be making aliyah. In making this move, I hope that others will be inspired to follow. But they and we need a Jewish State that wants us.  We need a place that not only likes the idea of aliyah, but welcomes, embraces and facilitates aliyah by recognizing the Judaism which brings olim to Israel and by offering, for those not Jewish, a reasonable and realistic way into Judaism. Currently, no conversions are being performed in Israel. Moreover, the conversions which are approved, when conversions are finally completed, require a level of observance and knowledge which cannot, realistically, be attained by those, of whom I speak.

Some of us come to Israel out of a deeply rooted and unwavering sense of Zionism.  But those who have not grown up with Jewish and Israel education, develop deep connections to Judaism and Israel from their conversions, their rabbis and their communities in the US. To make aliyah as outsiders, as “others”, or even as members of the extended family of Jews, belies their feelings of Jewish connection and their expectation of being accepted as Jews. For American Jews to make up the next wave of olim, as envisioned by MK Stern and by the Government of Israel, Israel must be willing to help those not Jewish find a reasonable way to convert, and a way to accept those who have converted to Judaism, and to welcome them as Jews with open arms.

About the Author
Neil S. Cooper has been the Senior Rabbi at Temple Beth Hillel -Beth El in Wynnewood, PA. He will retire from his pulpit in June, ‘22 and he and his wife look forward to making Aliya shortly thereafter.
Related Topics
Related Posts
Comments