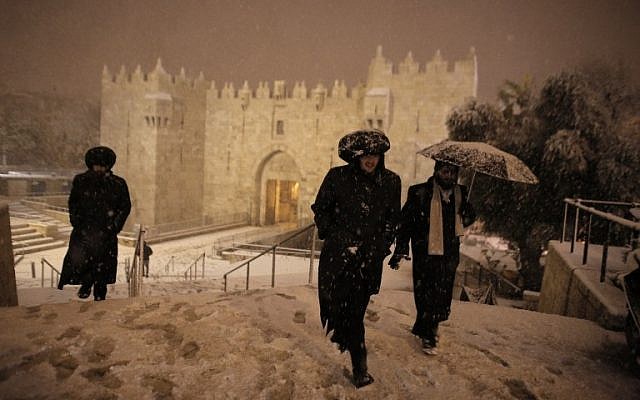 It has been said that weather forecasters appreciate economists as they tend to make them look better. This week Jerusalemites migrated between their forecast apps and their bedroom windows, uncertain which was more likely to bring the anticipated salvation. Fortunately for some, unfortunately for others, the week passed with little more than some rain and chilly winds.

In recent years Jerusalem has grown used to one or two annual snowstorms. This is always accompanied by a level of excitement and expectancy. Local journalist Jacky Levy once explained that Jerusalem, a city of sharp and harsh divides, becomes curved and malleable when covered with a layer of snow.

Far more predictable than an actual snow storm are the politicians’ reactions to the damage that the storm may have cost. Tens, sometimes hundreds of millions of shekels of damages are numbers thrown out in an attempt to receive government compensation of public sympathy for the poor local government who is landed with the demanding task of restoring order after a period of extreme weather conditions.

So how much does a snow day actually cost the local economy? How is this number calculated?

The main financial damage of a snow day is the lack of production of workers who cannot get to their offices and businesses which cannot function. If we take the GDP of Israel at about $305 billion, then 3.6 million workers producing $305 billion means each member of the work force donates $85,000 a year to the country’s production. Jerusalem boasts a workforce of approximately 405,000, so if no-one goes to work on a snow-day, the economy loses 131m NIS due to the city being covered with a blanket of white. This number makes the additional costs of snow-ploughs, electric faults and other damages seem like small change.

Although the local politicians like to throw out multiple digit numbers with commas after zeros, this reckoning is far more artistic than scientific. Similar to the estimations of the cost of a strike day, which varies between 310 million NIS and 2.35 billion NIS depending on who is asked, the cost of a snow day is really almost impossible to calculate.  Many businesses do open, albeit late and short staffed. Jerusalem’s workforce is heavily loaded with the public sector. A no-show of much of the public sector is somewhat reminiscent of the great Greek pensioners strike of 2010. Not much midnight oiled was burnt to ensure that the pensioners returned to their state of non-production. In the case of strikes, and snow-days, it is practically impossible to know how much production was lost, and how much was merely delayed.

No less challenging than estimating the cost of snow, is assessing the cost of snow talk. The wasted time spent in work places gossiping, forecasting and envisaging the storm can amount to an aggregate tens of thousands of work hours. This usually starts a week prior to any flake, and continues for three days after the mounds of blackened ice have already found their way to the dead sea.

Snow predictions require a very precise combination of meteorological conditions too be correct; economic predictions are much the same. Harry Truman wanted to meet a one-handed economist – one who could say “on the other hand”. The combination of snow and economics will therefore provide for a computation of almost no credibility whatsoever.

The author, Matti Munk, is founder of Western Wall Street