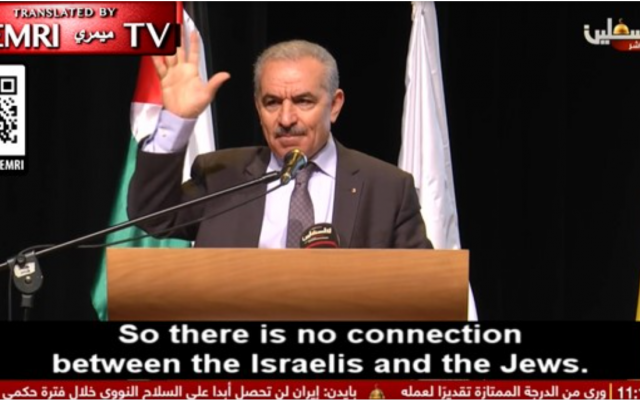 For many years the Palestinian Authority, which falls under the umbrella group of the Palestine Liberation Organisation, has put forward several spokespeople claiming that the Jews of today, have absolutely no connection to the Jews of 2,000 years ago.

They have also regularly claimed that the main founder of Christianity (The Jewish Weekly prevents me from actually writing his name, for fear of upsetting some loyal weekly readers) was a Palestinian. Actually he was a Jew, but let’s leave that topic for another day.

And according to PA leaders, Palestinian history goes back more than 6000 years. Funny thing is, if we count our Jewish years from the beginning of creation, Palestinians were around at least 219 years before creation.

Perhaps they witnessed the great historic dinosaurs and sea monsters after creation.

So far, nothing new in their public relations strategy, as sadly a great deal of it is filled with misinformation, half-truths, distortions, and in the above case, outright lies.

But now PA Prime Minister Mohammad Ibrahim Shtayyeh becomes the latest high profile Palestinian figure to say, that there is no connection between Israel and the Jewish people.

Speaking to an audience which was aired on Palestine TV on June 29, 2021, Shtayyeh, who apparently is an economics “expert”, in case you mistakenly believed, he was some grand historian with a respected track record, announced “The Hebrews, the Jews and Israelites are not the same thing”.

What a genius eh? And they made him Palestinian Prime Minister.

In case you are wondering, Shtayyeh went on to say that we are “Khazar Jews” who converted to Judaism in the sixth century CE and that Israel constitutes “A function rather than a State”. Moreover the “evidence” is that Oliver Cromwell, Napoleon Bonaparte and Balfour all back this up.

Let’s leave his speech for now and talk about the Palestinian Authority. It was founded in 1993 after Israel found it painful to deal directly with the PLO when it signed the Oslo Accords. The PLO was created by Yassar Arafat in 1964 next to the graves of Jews at a hotel on the Mount of the Olives.

When British troops were in the land in the thirties and forties, they referred to the Jews as Palestinians whilst the Arabs were Palestinian Arabs. In fact the UN partition plan of November 1947 was based on the question on whether “Palestine” should be divided into two independent states – Arab Palestine and Jewish Palestine.

Today, the PA President Mahmoud Abbas is in his 17th year of a 4-year-term. He openly boasts about being proud that the PA pay Palestinians who murder Jews, a handsome monthly amount.

But more importantly, the PA teach their people hatred and lies, steeped in classic anti-Semitic rhetoric such as “Khazar Jews”, in order to delegitimise and demonise the Jewish people and sever that connection with the Land of Israel.

Palestinian Media Watch and MEMRI in Jerusalem, who do fantastic work, constantly report on the Palestinians claiming in news interviews and speeches that almost every Jewish city in Israel, is really a Palestinian city.

Historic coins found in Israel are really Palestinian coins. Several biblical stories are altered to make into their own Palestinian stories and that there was never a Jewish Temple.

It’s not just misinformation, half-truths, distortions and lies, its genuine theft of our history, heritage, culture and land.

I don’t wish to make fun of Palestinian Arab identity. But I regret to tell you, that you have no ancient history in the Land of Israel or anywhere for that matter. You have no tombs of ancient Palestinians, except of course Arafat.

You have no historic Palestinian cities, temples or mosques. (The Jerusalem mosques belong to the religion of Islam, not the Palestinians). You have no archaeological evidence, no historical books, no currency, no national anthem, no songs or no literature.

You may have just built (with outside help) a brand new Palestinian museum with few artefacts inside. And you may have members of world bodies regurgitating your historical inaccuracies. But you will never succeed in stealing a 3500-year-old history of the Jewish nation that was born out of slavery in Egypt, eventually arriving in the Land of Canaan (not the land of Palestine) in the Jewish year 2489, (1272 BCE).