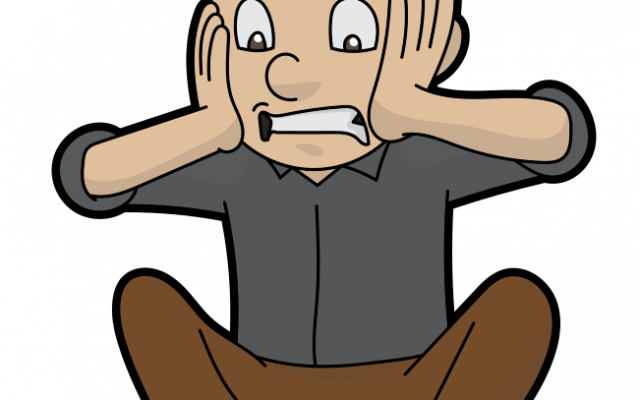 Is it time to panic, yet?

Rabbi Nachman of Bratzlav used to say, “to a believer, believing is seeing.”

I am now inclined to believe he was referring to those predicting pandemic, apocalypse, and bioterrorist mayhem.

Having said that, I should make it clear that the Novel Corona Virus is significant enough to pay close attention to trending numbers and immediately implement preventive measures – even those that might seem draconian. In this regard, Minister Litzman is to be commended (and I’m not even a Likudnik). If we go back and review what happened in the SARs pandemic, it was these types of measures that stopped SARS from fulminating out of control. If anything, the spiraling cases we see now are directly related to the delay in closing borders and restricting travel.

Prognostications of an uncontrollable pandemic, however, are premature. Nevertheless, those needing their adrenaline rush generated by panic predictions will not be assuaged, no matter what. The problem is – believing is seeing. And seeing a pandemic when none exists (a Type B error) is just as dangerous, maybe more so, than missing one.

And having said all this, context is the key.

So, let’s go back to 2014 when Ebola hit Africa. The WHO was criticized for responding too slowly (yet again). The CDC in its September 2014 MMWR (Mortality and Morbidity Report) concluded that by January 20, 2015, there could be a total of approximately 1.4 million cases and 1.26 million deaths, (using a case-fatality statistic of 90%).

More than a year later — after the WHO organization declared the epidemic over, a grand total of 26,683 cases were reported, with a case fatality of 11,315 and a case-fatality of less than 40%, not even reaching half the statistic used in the predictions.

OK, back to Covid 19. To put the Ebola statistics in context, the case-fatality of CoVid 19 is about 3% world-wide, and when Chinese statistics are excluded, it hovers around half that, at less than 1.5%, a far cry from the 40—50%, now assigned to Ebola.

But, as the panic-predictors argue, it is not the case-fatality that is crucial, it’s the infectivity. That, actually has some truth. The Spanish flu of 1918-1919 was so dire, not because of its case-fatality, but because it was infectious and because no steps were taken to curtail the spread. (A low case-fatality can turn out very high numbers of dead people if lots of folks are infected, and they are free to roam about). With Spanish flu, it was estimated that a half -a-billion people were infected, world-wide. Of course, that was before we even knew what viruses were, and quarantine and isolation were not on the event horizon. Parades, large meetings, and sailors confined in small ships (ships – get the connection, – don’t we ever learn?) continued to spread the disease throughout the pandemic. (In fact, it’s not even the R or T that determines the outcome –  it’s how quickly and carefully we institute control and quarantine measures).

But infectivity (along with case-fatality) is crucial in terms of preparation and response. So, as we know, infectivity is determined by both how many people one person is likely to infect (the R) as well as the transmission rate (T) — meaning how many times or over how many generations will the disease be spread — or, how long will the chain of transmission last.

First, I haven’t seen any reports on the T — the number of generations of spread. An epidemic curve can give us some ideas though (see below). But it’s murky. And this information is crucial in risk prognostication.

Next. Reports have surfaced, that the replication rate (R) is between 2 and 3, meaning one person is infecting 2 to 3 people, which might be considered low to moderate. Keep in mind this is an average – in some places, it will be higher and in some lower. (To put this in context, the R for measles is upwards of 10;  smallpox is listed at 5-7; HIV/AIDs is 2-5). Some researchers, however, consider CoVid R to be very contagious, even raising the R to 5.  But if you read closely,  all the statistics were based either on the China experience – or on world averages (which are heavily weighted by the Chinese experience). And to a statistician, if you have a hand in the freezer, and a foot in a bucket of boiling water, on average- you’re fine.

To get a real sense of what’s going on, you need to look at the actual country-by-country. Theoretically, the R shouldn’t vary by country, but in practice, it does. This could be a function of racial genetic susceptibility or efficacy of quarantine. But as the Ebola predictions show, reality really is different than a mathematical model, and so far CoVid 19 actuality is far less worrisome than the predictions. In fact,  “several countries have [already]reported fewer cases than the model predicts.”  And while some say CoVid19 is less deadly but spreads more rapidly than SARs, this may be a function of the better and faster institution of control, quarantine, and travel restrictions employed in 2003.  Once the cat is out of the bag, or the virus enters the human world, that’s when the spread starts. So, given the delay in world- response this go-around, it’s really difficult to make an accurate comparison between SARS and Co Vid 19’s infectivity. Further, regarding spread outside China, we don’t even have clear models based on hard data.

But looking at the data we do have, there appears to be quite a bit of difference comparing the spread in Asian countries, including China as well as Hong Kong (which some people consider part of China), South Korea, Japan (and the Japanese ship)., Singapore – and most of the rest of the world. Interestingly, Taiwan has produced comparatively few cases. 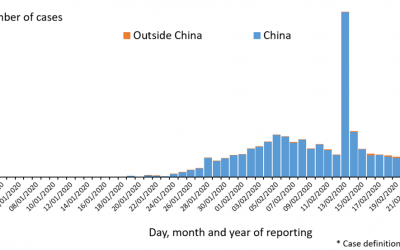 Daily reports of new cases focusing on China. The numbers appear to be leveling off slowly. The 14,840 case spike on February+ 13 was attributed to incorporating different diagnostic techniques.[BPB]  Graph courtesy ecdc. Europa.
The evidence we do have is that outside of Asia (China and surrounding countries), spread and transmission is, and continues to be, comparatively quite low. Note the** tiny caps of orange in the above graph – those are non-Chinese cases. (There are two exceptions- see below).

So here are the hard facts:

As of today, there are 37 countries reporting Co-Vid 19. That number is inching up — but slowly, signaling we could have done a better job in restricting international travel. 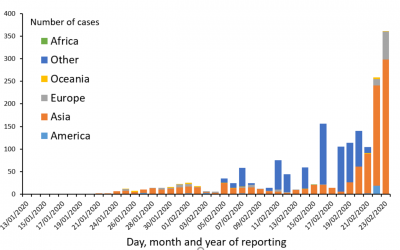 Thes graph above does exclude Chinese cases. The majority o//f these non-Chinese cases are Asian (orange)  and their contribution does not seem to have plateaued. The second largest contribution (blue) is – misc. countries, which appears to have tapered off. The third is amalgamated Europe (grey), spiking as of yesterday, probably representing Italy, again pointing to an expected increase. Graph courtesy ecdc europa.

18 countries (about half ) reported between one and 3 cases – meaning the R is likely 0 or 1 with no generational transmission. The initial case or cases were imported (apparently from China or the Japanese ship) and they did not infect more than one other person – at least so far. This is significant, in that it signals the epidemic in these countries will likely end soon (if it hasn’t already) – that is if no other cases are imported.

The next tier of 12 countries report between 10 and 35 cases. This jump of signals greater infectivity. But these numbers seem to have plateaued – meaning the spread appears to have been truncated. An epidemic curve, trifurcated by tiers of infectiousness, would tell us this for sure, but neither the WHO or CDC has produced a readily decipherable graph of this statistic. (The one above lumps all non-Chinese countries, including the Asian ones in the top tier).

Interestingly, Canada, which boasts a large Chinese community reported 251 cases and 43 deaths when it came to SARS. This go-around, they are reporting 10 cases and no deaths. (Could it be that exposure to SARs conveyed some immunity? Interesting question. To my knowledge, no one is even considering this).

Then we have the top tier – composed of 6 Asian countries (and the Japanese ship) and Iran and Italy. Here the cases range from 77,150  for China, (which appears to have plateaued) then falls to 833 for South Korea (which does not appear to have peaked -meaning we should expect more cases and greater acceleration), before dropping to 64  in Iran, also showing an increasing trend.  These differentials provide clues as to the mode of transmission, susceptibility and the effectiveness of quarantine. Sadly, no one seems to be focusing on inter-country differences.

We should be prepared for a greater increase in South Korean cases. But because China is South Korea’s largest export market, close non-human connections (ships, containers, holds) are available to greatly increase transmission vectors between the two countries. This feature would not apply to other areas, and so the South Korean epidemic should be self-limiting. In other words, if the South Korean influx is indeed related to the high trade level between it and China, we can expect the South Korean experience to mirror China’s – which means we are in for a long haul – but if we can keep the South Korean door closed (by quarantine and travel bans and restrictions), it should not affect the rest of the world.

Regardless, the 14-day quarantine appears too short. It needs to be increased, to at least 21 days, if not 30. Whether countries have the resource wherewithal to accomplish this, remains to be seen.

And this brings us to the infectivity in non-Asian countries, which with two exceptions remains low. The first is Iran. Whether their experience is relevant to the rest of the world is questionable.

The second exception — and the concern — is Italy.

The dramatic upsurge in cases in Italy appears to be centered in the Lombardy region, with the index cases imported from China, although the source of infection in many of the cases can’t be linked to China.  (It doesn’t appear that they are checking for contacts with other Asian countries). So, while we see evidence of greater infectivity in Italy – we don’t know why or how. Or where the disease started.

And this is where I get concerned. This past week was Milan Fashion Week. Milan is about an hour and a half from Lombardy, the epicenter of the Italian outbreak. Take one look at the advertising graphics for Milan Fashion Week – and you’ll see lots of Asians. Did they import the disease? Was food for the event imported from China? Did anyone check the trunks importing garments from China? Did anyone even make the connection?

And while Israel is closing its border, restricting travel and imposing quarantine to Asian countries, the concern over Italy seems to be less. Further, we can assume many fashionistas will travel back from Italy in the coming weeks to New York, London, and Paris.

The good news is that quarantine and travel restrictions seem to be working. Let’s hope that other countries follow Israel’s lead in blocking the spread.