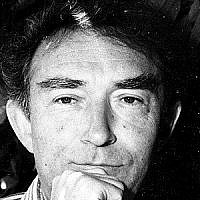 The Blogs
Edward Alexander
Apply for a Blog
Advertisement
Please note that the posts on The Blogs are contributed by third parties. The opinions, facts and any media content in them are presented solely by the authors, and neither The Times of Israel nor its partners assume any responsibility for them. Please contact us in case of abuse. In case of abuse,
Report this post.

President Obama’s decision to send the potentially catastrophic “executive agreement” (formerly known to speakers of English as a “treaty”) with Iran for immediate unanimous approval by the UN Security Council before it could even be considered (much less voted on) by the legislature of his own country is only the latest (albeit the most brazen) of his relentless assaults on the American system of checks and balances.

It is the culmination of an Iranian policy evident from June 2009, when Iranians who took to the streets en masse to protest the results of a fraudulent election were savagely beaten, by government order. On June 15, Obama said he was watching the news from Iran. But, he quickly added, it is “up to Iranians to make decisions about who Iran’s leaders will be,” not America’s, adding that “we respect Iranian sovereignty and want to avoid the United States being the issue inside of Iran.” He would not be swerved from his policy of “engagement” and “outreach” to the Islamist regime of technically competent barbarians, a regime to which he has now assigned the role of dominant power in the Middle East.

Obama’s resort to the UN before the legislative bodies of his own country could consider the treaty is also the existential realization or culmination of a worldview hitherto alien to America. In The Wall Street Journal of 20-21 July 2013, Sohrab Ahmari published a shrewd and unsettling interview with ex-senator Jon Kyl about the potential threat to American sovereignty posed by the transnational legal movement modeled on the European Union and its “progressive” and humanitarian values. These are articulated in Brussels without regard to representative national legislatures — in Ireland or Italy or France.

We learned from the Kyl interview that the greatest success of “trans-national legal thinking” has come via the Obama administration. It was President Obama who appointed the most zealous devotees of this “thinking” — Anne-Marie Slaughter of Princeton and Howard Koh of Yale — to high positions in the State Department. What Mr. Ahmari neglected to mention was that Obama was the first American candidate for President to campaign “trans-nationally” for the White House — in Europe (also Egypt) as well as America, as if his popularity there would redound to his credit here. What was one to make of the acclaim he won on a continent where, unless we made an exception for one undersecretary in France at the time (2008), not a single high government position was held by a black person?

Was it that he kept offering “apologies” for many instances of American misbehavior? Or that he promised, for example at the G-20 summit (March 30, 2009) that he would be more respectful of Europe than George W. Bush had been, and that Americans would no longer be “dictating solutions” to other countries? Did it have something to do with the fact that, unlike President Bush speaking in London in November 2003, he did not express unmannerly disapproval of Europe’s resurgent anti-Semitism to European political leaders? Or that he kept sneering at the notion of “American exceptionalism” (an idea about which he knows next to nothing)?

In July of 2008, before a crowd of 200,000 at Berlin’s “Victory Column,” , Obama showed not the slightest discomfort about rousing the passions of a huge throng in the land whose mass frenzies had unleashed Hitler on the world. More importantly, he endorsed the idea of “global citizenship” and described himself as “a citizen of the world.” Was he already thinking eight years ahead to 2016, when the 22nd amendment to the U. S. Constitution (unless it should be repealed by Democrats) might require a career move from President of the United States to another, perhaps less exalted position?

The Kerry-Obama nuclear treaty displays an utter indifference not only to the repeatedly declared genocidal intentions of Iran towards Israel, not only to its daily dithyrambs of “Death to America,” not only to the Iranians’ boastful announcement, just after signing, that they will now make use of the $150 billion “signing bonus” (to borrow baseball lingo) to support their terrorist proxies all over the Middle East. It also pledges the American and European signatories (Annex III.D.10) to protect Iran’s nuclear projects from attacks that might slow them down. (One is reminded of Alec Guinness finding himself working for the Japanese enemy in “The Bridge over the River Kwai.”) Did it ever occur to Obama and Kerry that the attacker might be not Israel — both men have displayed icy disregard of attacks on Jewish persons, whether in Israel or France) — but the country that they now (still) call their own?

Two Republican candidates for their party’s presidential nomination have recently declared their intention to oppose or undo the U.S.-Iran treaty. Scott Walker says he will act on day one of his presidency, Jeb Bush, after a slight delay because of expected opposition from the Europeans. Neither of them seems to take into account the opposition from Obama himself. Will this President, a man of formidable ego, be content to return to the life of a private citizen? Or will he hold forth as not only “a citizen of the world,” but a citizen in the employ of the United Nations, the organization that has given its approval of the Iran “deal”? The Secretary General of that august institution serves a five-year term, which may be renewed indefinitely. Until now, UN conventions have made citizens of the five members of the Security Council ineligible for the position; and Obama is not yet a man without a country. But flouting custom and precedent (to say nothing of constitutional law) is one of the President’s highly developed skills.

About the Author
Edward Alexander taught English at the University of Washington 1960-2004 and was the first chairman (ten years) of UW's Jewish Studies Program. He has been a visiting professor at Tufts, Hebrew University, Tel-Aviv, and Memphis State U. He has his MA and PhD from University of Minnesota and BA from Columbia College. Edward Alexander was born in 1936 in Brooklyn, NY. He is the author of numerous books, starting with MATTHEW ARNOLD and JOHN STUART MILL (Columbia UP, 1965). HIs most recent book is JEWS AGAINST THEMSELVES (Transaction Publishers, 2015).
Related Topics
Related Posts
Comments