The Blogs
Steve Sheffey
Pro-Israel writer and activist
Apply for a Blog
Please note that the posts on The Blogs are contributed by third parties. The opinions, facts and any media content in them are presented solely by the authors, and neither The Times of Israel nor its partners assume any responsibility for them. Please contact us in case of abuse. In case of abuse,
Report this post.

President Obama has called for the removal of Syrian President Assad, ordered the successful assassination of Osama bin-Laden, done more than any other president to stop Iran’s illicit nuclear program, restored Israel’s qualitative military edge after years of erosion under the Bush administration (and secretly sold Israel the bunker-busting bombs it requested but did not receive during the Bush administration), increased security assistance to Israel to record levels, boycotted Durban II and Durban III, took US-Israel military and intelligence cooperation to unprecedented levels, cast his only veto in the UN against a one-sided anti-Israel Security Council resolution, opposed the Goldstone Report, stood with Israel against the Gaza flotilla, and organized a successful diplomatic crusade against the unilateral declaration of a Palestinian state.

How refreshing to know that Mitt Romney promises to “do the opposite” of what President Obama has done for Israel.

Republican partisans continue to apply a double standard to President Obama, ignoring his tangible successes in strengthening the US-Israel relationship and criticizing him for what would go unnoticed in other administrations. It’s all part of their campaign to delegitimize President Obama in the eyes of pro-Israel voters.

Ronald Reagan suspended arms shipments to Israel, supported a UN resolution criticizing Israel for bombing Iraq’s nuclear reactor, sold sophisticated arms to Saudi Arabia over AIPAC’s strong opposition, and told Israel that “the relationship between our two countries is at stake.” Reagan never visited Israel in his entire life, but he did visit a cemetery where Nazi war dead were buried, over the objections of Elie Wiesel.

George W. Bush rebuked then-prime minister Ariel Sharon in 2003 by rescinding $289.5 million in loan guarantees for Israel as punishment for what Bush considered illegal settlement activity. In 2004, the Bush administration abstained rather than veto a UN resolution condemning Israel for its actions in Gaza during a military operation aimed at stopping terrorism and weapons smuggling.

Bush pressured Israel to allow Hamas to participate in Gaza elections, thus conferring on Hamas a legitimacy it could never have otherwise achieved. Perhaps worst of all, Bush made little progress in stopping Iran’s march toward nuclear weapons. President Obama has not negotiated with Hamas. He has mobilized the international community to impose the toughest sanctions ever against Iran and flat-out declared that he would not allow Iran to acquire nuclear weapons, saying no options were off the table. 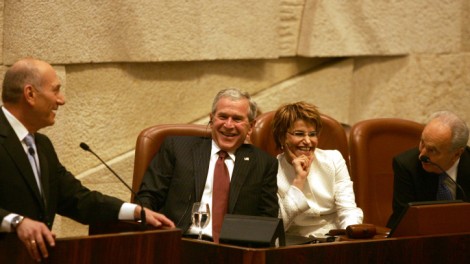 We hear that Obama hasn’t visited Israel as president, but Jimmy Carter and Bill Clinton are the only two presidents who visited Israel during their first terms in office.

George W. Bush did not visit Israel until his seventh year as president. Ronald Reagan never visited in his entire life. Obama went to Israel as recently as 2006 and 2008, when he visited Sderot and saw first-hand the damage inflicted by Hamas terrorists.

We hear about imagined slights to Prime Minister Netanyahu, but when the chips were down, Obama came through for Israel and Netanyahu. When Israel asked for help fighting the Carmel forest fires, President Obama’s response was “get Israel whatever it needs. Now.”

In September 2011, when the late-night call came from Israel to Obama asking for help in rescuing the Israelis trapped in the Egyptian embassy, Netanyahu himself called it a “decisive and fateful moment,” recalling that Obama “said ‘I will do everything I can.’ And he did.”

We hear when Israel is not invited to a conference or is omitted from even the most trivial list. But take another look at an important list, perhaps the most important list of this century: George W. Bush’s list of the Coalition Members for Operation Iraqi Freedom. Bush did not include Israel. Whether we like it or not, George W. Bush and every president, Democratic and Republican, has taken Arab sensibilities into account when formulating foreign policy.

Attacking President Obama on Israel is like attacking John Kerry on his personal military record. The Swift Boat campaign worked because Kerry and his supporters were too slow to take it seriously and fight fiction with facts. The result was four more years of George W. Bush.

President Obama’s words and deeds prove that he is not only a strong friend of Israel, but that he is willing to stand up for Israel publicly and behind the scenes. That’s what matters, and that’s why most pro-Israel Americans will see through the double standard and again vote for President Obama in 2012.