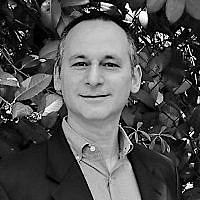 The Blogs
Hadar Susskind
Apply for a Blog
Advertisement
Please note that the posts on The Blogs are contributed by third parties. The opinions, facts and any media content in them are presented solely by the authors, and neither The Times of Israel nor its partners assume any responsibility for them. Please contact us in case of abuse. In case of abuse,
Report this post. 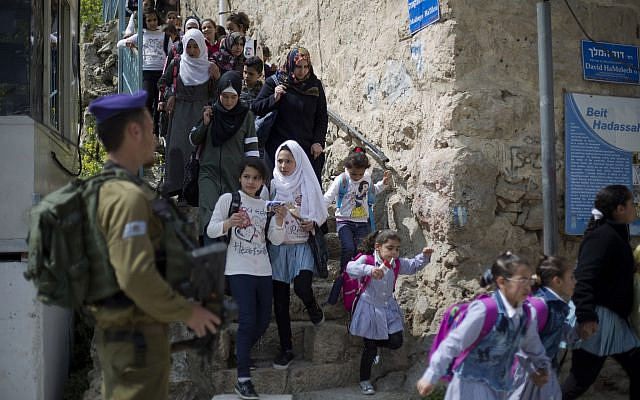 In this March 21, 2019 photo, an Israeli soldier stands guard as Palestinian school children cross back from school in the Israeli controlled part of the West Bank city of Hebron. (AP Photo/Ariel Schalit)

If you follow social media, you will see – almost daily – video snippets of traumatized Palestinian schoolchildren in Hebron, Jenin or Nablus. With the IDF stepping up its raids into West Bank towns, schools are often becoming battlegrounds between Israeli soldiers and armed Palestinians. Sometimes soldiers pursue Palestinian militants who then seek shelter at schools. Sometimes Israeli forces pursue stone throwers. Sometimes, as happened on Yom Kippur Eve in Hawara, near Nablus, it is Jewish settlers who attack Palestinian schools.

I am not telling you all of this simply to rail about atrocities. I don’t know the specifics of each of these incidents. But I am familiar with the background of these and many other similar West Bank scenes. It’s the Occupation, a reality that Palestinian schoolchildren experience every day.

As I watched these videos, I thought about the obsession on Capitol Hill — and among many American Jewish organizations — with the curriculum taught at Palestinian schools. It’s not a new obsession. For the past 25 years, members of Congress have latched on to this issue to pander to Jewish and evangelical groups, demanding investigations and reforms, slapping conditions on aid and imposing sanctions.

Last month, the House Foreign Affairs Committee marked up the so-called Peace and Tolerance in Palestinian Education Act, which demands another set of conditions and sanctions in relation to the Palestinian Authority’s school curricula.

Don’t get me wrong. Curriculum concern is not a red herring. Some Palestinian textbooks do include objectionable content in the context of asserting the Palestinian national narrative and presenting Israel and Zionism in a negative light. But guess what: Israeli textbooks do the same in relation to Palestinians when they assert the Israeli national narrative. Just like Palestinian books refer to Palestine as the land between the Jordan and the Mediterranean, so do Israeli textbooks show the West Bank as a part of Israel, deleting the Green Line. And when the Tel Aviv Municipality recently decided to distribute a truth-telling map that does show the Green Line, all hell broke loose. Israel’s Education Ministry demanded that the maps be scrapped because they might “point to a particular political stand.” So, yes, textbooks should honestly reflect facts. They should not foment hatred or support violence. And these principles should be applied across the board, to both sides of the conflict. But, as we all know, Congress’ attitude regarding Israeli and Palestinian peace education is hardly even-handed.

There is a deeper layer of dishonesty regarding this matter. It’s the set of assumptions that serves as the foundation for the ongoing textbook campaign.

First, the false assumption that what Palestinian kids read in class would shape their political worldview and even motivate then to take violent action. Were your childhood school textbooks a major driver of your politics? Maybe. But when it comes to Palestinians, the argument is absurd. They don’t need a biased curriculum to hate the Occupation and to view Zionism as their enemy. Palestinians’ daily living experience shapes their worldview. The ongoing subjugation and indignity of the Occupation are what shapes the lives and attitudes of Palestinian children. They don’t need a textbook to teach them what a checkpoint has already made clear.

Another dishonest assumption is that the Palestinian historic national narrative, per se, as reflected in textbooks, incites violence or is antisemitic. The Israeli-Palestinian conflict is not only a dispute over land. It is also a clash between two contradictory narratives. If the government of Israel has the right to put a Zionist spin on the history it teaches Israeli students, then the Palestinian government has the right to its own spin. Sure, it would be great if both sides showed more respect and tolerance to the other side’s narrative, but it’s hard to expect that in the absence of even a shred of momentum toward peace.

If members of Congress and others want to influence the hearts and minds of young Palestinians, they should focus not on what students read in classrooms but on what they experience in everyday life. Start by helping to create a horizon of hope, a credible prospect for ending the Occupation, and a political path toward a real solution to this conflict, the establishment of a Palestinian state.

About the Author
Hadar Susskind is the President and CEO of Americans for Peace Now. Prior to APN, Hadar served in senior leadership roles at Bend the Arc Jewish Action, J Street, the Jewish Council for Public Affairs as well as the Council on Foundations and the Tides Foundation.
Related Topics
Related Posts