A weather-beaten wooden sign, cracking along the wood’s natural lines, stands at the top of my street. It is positioned at the main entrance to Jerusalem’s Abu Tor neighborhood, and the Israeli Jews and Palestinian Arabs, residents who live alongside one another here, pass it daily. When I first moved to Abu Tor, I didn’t immediately pay attention to it standing there, set back as it is into overgrown bushes. But on the too-warm October day that I first stopped to read it, the message left me momentarily breathless.

In the Six Day War
The Conquest of Abu Tor

From the War of Independence to the Six Day War Abu Tor was a neighborhood divided by the Municipal Line. On 6.6.67 the task to conquer the Jordanian part of Abu Tor fell to battalion 163 under the command of Lieutenant Colonel Michael Pykes. The conquest was planned to be implemented by taking control of four posts that were along the line: the “Yellow Shutters House”, “Lulav”, “Lion”, and the “Platoon House”.  The attack began at 15:45 under cover of tank and mortar fire. At approximately 18:00 the cleansing of Abu Tor was completed. During the course of the battle 16 soldiers fell, among them the battalion commander. Following the cleansing of the neighborhood, our troops positioned themselves in the southern sector of the Old City.

A map etched on the lower left hand corner of the sign shows where the key posts were situated, and the movement of the troops during the battle. 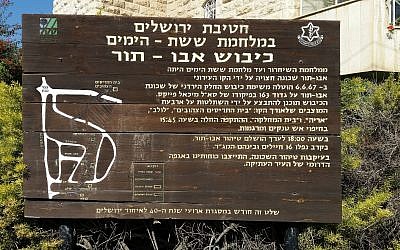 I read the sign through, and then, in disbelief, I re-read it.  How do my Palestinian neighbors from Abu Tor walking by this sign feel about it?  It reads like a daily slap in the face: from the conqueror to the conquered.

Two words in particular leapt out at me: כיבוש (kibush) – used both for conquest or occupation; and טיהור (tihor) – cleansing.  Each word appears twice in the text.

In the context of battle, the intended definition of the word כיבוש (kibush) is, presumably, conquest. But the other meaning – occupation – is inherently there.  “We, Israel, have conquered and occupied you!” the sign declares to the Palestinians who live here in this neighborhood, that fell to Israel after the Six Day War.  There are those who argue that we cannot be occupiers in our own Biblically endorsed land.  Here in Abu Tor, the sign links past and present, the Six Day War, the battle over Jerusalem, the Occupation and the ongoing Israeli-Palestinian conflict.

And then there is the word “טיהור” (tihor) – “purifying”, or “cleansing”.  By itself the word “pure” seems so perfect, yet battle is anything but pure or perfect. It is dirty, devastating, and the results are felt for years.  You cleanse dirt, stains, germs. In this context? Enemies.  In the Six Day War – the Jordanian Forces.  Right here, in this spot, at the top of the street leading into Abu Tor?  The implication in the phrasing “the cleansing of the neighborhood” is the neighbors – specifically, the Palestinian ones.

Writing a public sign must go through various stages of review at official levels.  This sign seeks to honor the Israeli soldiers who fought and sacrificed, especially those who died.  But in doing so, it dishonors half the people who live here in Abu Tor.  The message of heroic victory is intended to instill a feeling of pride in the Jewish Israeli side, yet conveys a message of domination and implicit threat to the Arab Palestinian side.

Frozen in the past

At the bottom of the sign there is an explanation that the sign was put up to commemorate the 40th anniversary of the reunification of Jerusalem. It seems reasonable to believe that had Israel lost the Six Day War, the results for Israel would likely have been disastrous. For Jews in Israel and around the world, winning the Six Day War was a moment of existential relief and heroic glory.

Yet for Palestinians it cemented their losses of 1948, the statelessness that ensued for those who fled, and launched Israeli military control in the West Bank and Gaza. These are the two experiences of the same string of events, the results of which continue to unfold.

Jerusalem’s status remains one of the focal points of disagreement in Israeli and Palestinian negotiations, with both sides seeing the Holy City as being the capital of their own state. The tensions of this wider conflict play out on the streets of West and East Jerusalem, including on my street in Abu Tor, in ways both big and small: from stones and security incidents, to small personal efforts to connect.

This sign at the top of my street in Abu Tor provides a daily message that keeps Israeli Jews frozen in that moment of survival, heroism, and black and white clarity.  In fixing our gaze always on that moment, we ignore the present moment and its complexities.

We won the war in 1967 – but is this sign really going to help us solve today’s problems in Jerusalem?

This is the first of a series of articles about living in Abu Tor.