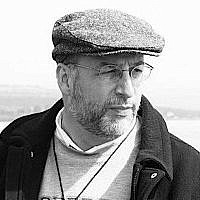 The Blogs
Chris Rollston
Apply for a Blog
Advertisement
Please note that the posts on The Blogs are contributed by third parties. The opinions, facts and any media content in them are presented solely by the authors, and neither The Times of Israel nor its partners assume any responsibility for them. Please contact us in case of abuse. In case of abuse,
Report this post.

On September 7, 2022, various press outlets ran stories about a First Temple Period Hebrew papyrus, with an Old Hebrew inscription. Four lines of text are partially preserved, with the first extant word of the first extant line reading “To Ishmael” (thus, it seems most reasonable to consider this an ancient letter). According to the press reports, the Israel Antiquities Authority has stated that this manuscript was acquired (either purchased, or as a gift) in ca. 1965 from a Director of the Rockefeller Museum named Joseph Sa’ad and from famed antiquities dealer Khalil Iskander Shahin, the latter most commonly known as “Kando” (famous for his connection with the Dead Sea Scrolls during the late 1940s, scrolls which date to the Second Temple Period).

According to the press reports, the existence of this manuscript recently came to the attention of my esteemed colleague and friend Professor Shmuel Ahituv. And through various channels, the papyrus was ultimately located in Montana. It has now been returned to Israel, a laudable move. Moreover, I am pleased to see that it is in the hands of the Israel Antiquities Authority. And I am also especially pleased that Dr. Joe Uziel, the Director of the Israel Antiquities Authority’s Judean Desert Scrolls Unit, has been a major point-person for this papyrus, along with Dr. Eitan Klein, Deputy Director of the Theft Prevention Unit. These are all very good signs. The various press reports have noted that Professor Ahituv will soon be discussing this papyrus in more detail. I look forward to that.

At this time, therefore, I simply wish (at this preliminary stage) to mention certain things that need to be considered as part of the totality of the discussion of this find….and things which (therefore) require that we refrain from drawing too many rapid conclusions, or making too many problematic assumptions. In other words, I hope that we can “tap the brakes” a little with regard to this “find.”

About the Author
Professor Christopher Rollston is Professor of Northwest Semitic Languages and Literatures at George Washington University (Washington, DC). He holds an MA and Ph.D. from Johns Hopkins University, and is a member of Phi Beta Kappa. He publishes widely in the fields of Biblical and Ancient Near Eastern Studies, especially the field of ancient inscriptions (in Hebrew, Aramaic, Phoenician, Greek, Akkadian). He has held two National Endowment for the Humanities Fellowships (one in Israel and one in Jordan). For six years, he served as the co-editor of the Bulletin of the American Society of Overseas Research, and for twenty years, he served as the editor of MAARAV, a journal of Northwest Semitic languages and literatures.
Related Topics
Related Posts