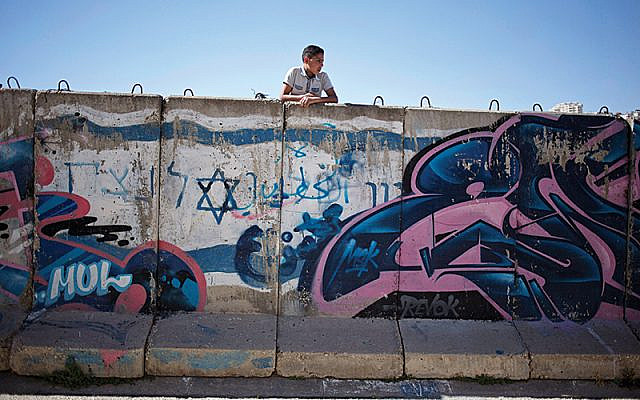 A Palestinian boy looks behind a wall separating the Israeli part and the Palestinian part of the West Bank. (AP Photo/ Ariel Schalit)

This coming week is slated to be a pivotal one, not only for the fortunes of the present coalition in Israel, but also for the fate of the Palestinians living under Israeli occupation. Exactly 55 years after the Israeli takeover of the West Bank and the Gaza Strip, fundamental issues of regime, governance, and sovereignty are converging around the impending vote on the renewal of the “Emergency Regulations for Judea and Samaria” (which also includes the Jordan Valley). Petty politics revolving around whether, when, and how the precarious Bennett-Lapid government will collapse have taken center stage, instead of the much more basic question of how long Israeli rule over Palestinians can continue against their will.

Immediately after the 1967 Six Day War and Israel’s annexation of East Jerusalem and its surrounding villages, the Labor-led government established a dual legal system. All Israelis living beyond the internationally recognized boundaries laid down in the 1949 armistice agreements (generally known as the Green Line — the pre-June 5, 1967 boundaries) were placed under Israeli jurisdiction and subject to its laws; Palestinians were ruled by military regulations and ordinances as promulgated by the Israel Defense Forces commanders in the relevant areas. The Emergency Regulations for Judea and Samaria — periodically refined and expanded — have been renewed by every single Israeli government since, regardless of political orientation or ideological persuasion.

This elaborate legal framework created an unequal system of control which progressively granted more and more rights to Israeli settlers in accordance with political circumstances and changes in Israeli jurisprudence, while simultaneously increasingly regulating Palestinian lives, property, services, rights, and mobility through military edicts. The combination of emergency regulations coupled with the legal obligation to periodically renew these instruments created a fiction of a temporary state of affairs despite the fact that over the years these arrangements assumed an aura of permanency. From a legal perspective, this system skirts international conventions governing the conduct of war (and especially the Fourth Geneva Conventions). It contradicts international human rights law. And it defies basic norms of modern legal systems. All of which is exactly the real-world manifestation of institutionalized inequality.

Yet, however unacceptable, this dualistic regime has persisted over the years, serving as a delaying tactic in the hope that its underlying causes would be resolved equitably, rendering its continuation unnecessary. Needless to say, this has not been the case. Ironically, the renewal of the Emergency Regulations is now being challenged for political reasons by those who have the greatest interest in their perpetuation: the current opposition led by Benjamin Netanyahu and his ultra-nationalist and religious partners. It is being supported by the most diverse government in Israel’s history, some of whose members have consistently opposed it for decades (including Meretz, the Arab parties, and some members of Labor). At the moment, there is no parliamentary majority for their approval, although most individual members of the Knesset would support such a measure — which is exactly what would happen immediately upon a Likud return to power if their political gamble succeeds — in order to postpone yet again coming to terms with its meaning.

The drama surrounding the impending vote is immense. But this focus is totally misplaced. The question is not whether the government will be defeated now, or if it will be salvaged — probably through settler pressure on the right fringes of the opposition — for another brief while. Politically, it is no longer sustainable, and its dismantlement (much like that of its immediate predecessor) is just a matter of time. Much more significant is the growing understanding that the dual regime that Israel has overseen for over half a century is no longer viable legally, morally, practically, or from a Jewish ethical perspective (“You shall have one law for you and for the strangers in your midst” (Exodus 12:49 and elsewhere)). In the third decade of the 21st century, ongoing institutionalized inequality breeds ungovernability.

Indeed, the immense political turmoil that Israel has been undergoing in recent years is symptomatic of a growing lack of governance. This instability is the outward expression of the inability to design and effectively enforce government policies. Unlike regimes which aim at linking those at the helm with citizens in ways that augment their legitimacy, enhance their authority, and thereby increase their ability to rule, governance is a function of state capacities – this takes place in democracies through popular approval, and in authoritarian constructs through the use of deterrence or outright force. For the past two decades, with very brief breaks, Israeli governments have forfeited their ability to govern on the altar of protecting Jewish supremacy on the land without defining state boundaries.

This has traditionally been the case vis-à-vis the Palestinians in the occupied territories. But as time has progressed, the same approach has been used to marginalize the voices of Arab society within Israel and of Jewish groups advocating a shared society based on equality and justice for all. The unabashed delegitimization of Palestinian citizens (“No loyalty, no citizenship”), the constant discreditation of their leaders (“The Arabs are swarming in droves to the polls”), and the relentless questioning of their loyalty (just last week, a national poll asked: “Do you agree that this government is supported by upholders of terrorism?”) has created a major breach of trust. This has been compounded, especially in the latter years of Netanyahu’s tenure, by orchestrated attacks on the former premier’s critics. These originally emanated from the left, but have come to encompass anyone who disagrees with his actions — even within the ranks of his own party. By now, the problem of governance has become so overriding that it constricts the capabilities of even the embracive coalition in power today which has, at least in style and approach, sought to override some of the more toxic fuels of the Netanyahu era.

This is hardly surprising. Lack of governance relates directly to the core issue of sovereignty. For a century and more, relations between Palestinians and Israelis have centered squarely on their competing claims to the land. Although the conflict has metamorphosed over the years, assuming many different forms and articulations, its essence remains unchanged. The indeterminacy of this continuous limbo has engendered waves of violence and growing extremism. Annexationists on both sides demand supremacy at the expense of the other — and of their own identity. Those opposed — in all probability, a majority in both communities — understand that both peoples are here to stay and their wellbeing depends on equitably sharing the land, but are by now at a loss as to how to proceed.

All are aware that without the clear delineation of sovereignty, there cannot be a secure state with recognized legitimacy over all the people in that territory. And lacking such a basis for governance, the regimes of control are by definition guided by the inequitable application of force. In the meantime, arguments over symbols abound, converging in and around Jerusalem, where these anomalies have converged most pointedly, spilling over to the West Bank and deep into Israel within the Green Line. No confiscation of Palestinian flags (not those of the Palestinian Authority or the PLO) or prohibition against their display can replace coming to terms with accommodating the sovereign rights of both peoples to the land.

This is, and has always been, the heart of the challenge confronting Israelis and Palestinians. As the system has become increasingly bankrupt, recent events have magnified its dangers and accentuated its urgency. The entire pyramid of control is unraveling because — as so many powerful countries have learned to their detriment — they cannot subjugate other peoples and deny them their freedom with impunity forever. The situation should never have deteriorated this far. Whatever the outcome of the vote this week, now is the time to rectify it before it is too late.