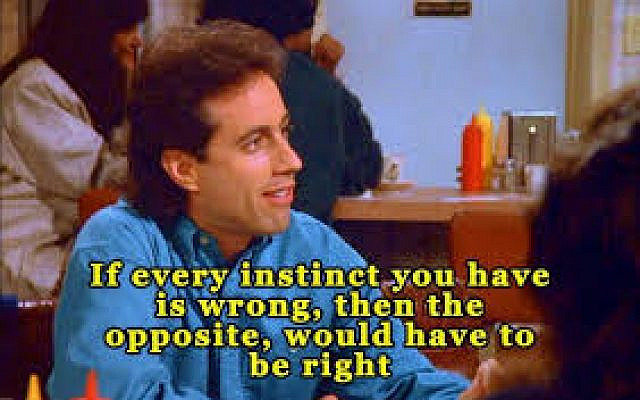 With all the turmoil of the impeachment, the investigations, the inspector general report, I took a step back to look at the big picture. I had specific reasons that I supported and voted for Donald Trump. The best analogy is ” The Opposite.”

What is “The Opposite.” For Seinfeld fans, it is the name of an episode in which George Costanza decides that his life is so miserable that if he does everything the opposite, then logically, he should go from being a loser to being a winner. ” Every decision I made in my entire life has been wrong.” My life is the complete opposite of everything I wanted to be. It’s all been wrong.

George is sitting in the luncheonette with Jerry. He orders the complete opposite of what he usually orders, a tuna sandwich. George walked up to a girl at the counter and said, “I noticed that you were looking at my direction.” She responds by saying that she saw that he was eating the tuna salad, which was the exact lunch as her. He then says, ” I’m’ George, I’m unemployed, and I live with my parents. She speaks very suggestively, ” I’m Victoria hi… They go out on a date.

Donald Trump is the exact opposite of everything that we as a country were doing. Think about it; here are just a few examples.

The economy:
Trump reverses the tidal wave of new regulations on business in the United States.
Trump lowers taxes on business .

The political elite and the media have told us for years that manufacturing is dead in our country and that we should all get used to slow-growth, stagnant economies like Europe.
Trump has removed the impediments to slow growth by loosening regulations that have been in place. Many of these regulations have been there for dozens of years and serve no useful purpose in today’s world.
The result:
Success, a growing, dynamic economy. Unemployment levels not seen in over 50 years.
Minority unemployment the lowest EVER.

Trump has focused on creating opportunities for all by supporting business and manufacturing growth.
Trump said that African Americans should vote for him because they had nothing to lose. The left screamed racism; however, the result is that President Trump has done more for African Americans than any of the Democrats have ever done. Unemployment is at historic lows and opportunities are high. There is a real movement in the black community, questioning their loyalty to a party that mistreats and ignores it when the light isn’t shining on them.

Foreign policy,
Trump has criticized NATO for not doing its share. The careerists all screamed that NATO is sacrosanct and that Trump was going to end the world. The result? NATO countries that have gotten away with not contributing their “fair share” ( the go-to term by lefties for the rich) to the military alignment are now paying billions.

Trump removes the United States from the Paris Climate deal.
The Paris climate deal. Was never debated in Congress, had no real enforcement mechanisms. The Paris agreement did virtually nothing to stop the two major world polluters, China, and India. It was a feel-good piece of paper that isn’t worth the ink that is on it. In fact the ink savings from tearing up that deal did more to help the environment than that deal would have.

Donald Trump has supported energy independence.
Energy independence has changed the world dynamic. The Saudi oil fields were attacked by Iran a few months ago. If that had happened a few years ago, the world would have gone into recession or worse a depression. The fact that the United States is now the leading producer of energy in the world has made us less dependent on middle east regimes that are hardly our friends.

At the annual White House Chanukah party, Trump announced an executive order against antisemitism. The order is similar to pending legislation endorsed on both sides of the aisle, including Gerald Nadler and Marco Rubio. It defines Jewish people as an ethnic group and not just a religious one. The order allows the government to consider discrimination against the group as a violation of a key civil rights law. That means schools could lose federal funding if they fail to combat discrimination against Jewish students. You know that this has to be a great idea since J Street, the “Pro Israel” organization that isn’t, hates it.
The left has been calling Trump and his supporters anti-semites since he started to run for President.
The President has a Jewish daughter, a son in law, and Jewish grandchildren. He has been the staunchest supporter of Israel ever.

The ADLs theory is that antisemitism, mostly from the right, has been rising since Trump became President. Antisemitism has been increasing, but the real growth industry for this has been from the left. The ADL has a political motive since the Obama administration weaponized every department that they could to push their ideological viewpoints.
The result will be that our children will not be harassed by anti-semites on campus since there is now a potential substantial financial penalty involved.

Israel:
Trump recognized Jerusalem as the eternal capital of Israel and moved the embassy there.

It has been a “given” by the media and the “intelligentsia” that if you move the United States embassy to Jerusalem that there would be chaos, riots, and the world would end.
No riots.
No chaos
The world is still here.

The United States has changed its position on settlements saying that they are not illegal.
No riots,
No chaos
The world is still here.

The United States now recognizes the Golan heights as being part of Israel.
No riots,
No chaos
The world is still here.

The United States has used its power and prestige to protect Israel from the constant harassment from the UN.
No chaos
No riots
The world is still here.

Trump destroys ISIS as a territory controlling caliphate. The President kills the leader of ISIS Al Baghdadi. Obama ignored them and called them the JV terrorist organization.”There is no military solution to this war,” screamed many on the left. There was a military solution that at least denied these terrorist thugs territory in which to grow.

Trump withdrew from the terrible Iran deal. Trump, The United States, has used its considerable economic strength to pressure Iran’s growing middle east revolution. Iran has been cheating on the agreement, and now they are exposed. Iranian proxies Hizbollah, the Houthis are all weakened by the sanctions placed on Iran.

Once again the Iranian populous is rising up against the regime but this time the United States is supporting them.
No chaos
No riots
The world is still here.

The United States tilt towards its natural ally Israel has also enabled many Arab countries to publicly warm up their relations with the Jewish state, which up until now has been unthinkable.

The President has questioned American Jews’ loyalty to Israel ( not to the United States). It is about time that someone said it. It seems no matter what this President has done for Israel, some in the Jewish community oppose it. They would prefer the “good old ” days of disrespect, meddling in elections ( sound familiar? ), and pressuring Israel instead of doing what is right. The left has twisted it to mean he is questioning Jews’ loyalty to the United States. Shame on them.

Immigration:
President Trump is fighting back against the unlawful sanctuary cities that Democrats have supported. Trump has limited immigration from “problem” countries like Syria and other broken societies.
Obama was called the “deporter in chief.” Trump has taken the heat for putting the immigration issue front and center; however, in reality, Obama’s policies are the ones that the left is now criticizing, not Trump’s.
Trump has faced the issue head-on has pushed for the wall, which is more than a wall; it stands for the United States protecting its sovereignty and enforcing it owns laws. Addressing the problem is the opposite of what other Presidents have done.
The result is less illegal immigration, more controlled immigration; wages are rising, unemployment has dropped, and the need for food stamps has diminished.

Trade deals have served its original purpose but have been outdated and have hurt our workers and economy. Trump renegotiated with Mexico, Canada, and China. Any change whatsoever is much better than no change.
The anti Trumpists , the media, all said that a trade war would ruin the economy.
The result? New trade deals and a new attention to protecting our own markets from the abuse that China and others have been getting away with.

McCain, Romney, and others ran campaigns that they played by the rules, quiet demeanor, respectful, courteous, and they all lost. President Trump fought back, didn’t take any nonsense from the other side, and won. Romney just sits on the sidelines, wondering why this man won, he still doesn’t get it.

Perhaps our country needed a grizzled, hard-nosed businessman to run it instead of an academic after all those who can do, and those who can’t often teach.

Written by the “Opposite” bearded Larry Levine December 14 2019 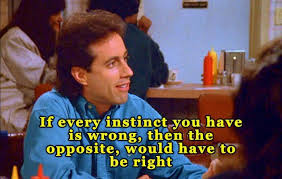 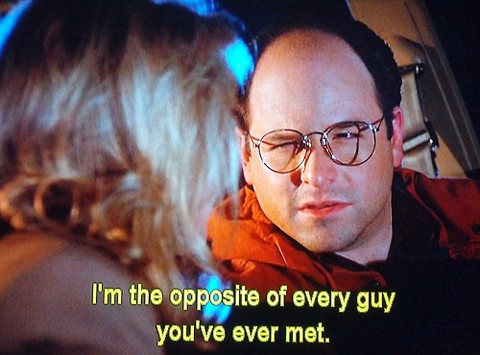