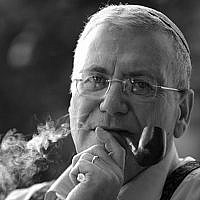 The Blogs
Yitzhak Frankenthal
Apply for a Blog
Advertisement
Please note that the posts on The Blogs are contributed by third parties. The opinions, facts and any media content in them are presented solely by the authors, and neither The Times of Israel nor its partners assume any responsibility for them. Please contact us in case of abuse. In case of abuse,
Report this post.

On Saturday, it will be 19 years since Hamas kidnapped my son Arik on his way home from his base and killed him. I have had approximately 6,935 days to consider how Israel handles the Palestinians it imprisons for such attacks.

The entire population of Israel waited with bated breath for the release of IDF soldier Gilad Shalit, and we shall forever remember the tears that welled in our eyes when we saw him for the first time free from captivity. What is the difference between Gilad the soldier who fights the Palestinians for the Israeli people, and between the Palestinians locked up by Israel who fought for their people, for the freedom of their homeland and against the Israeli occupier?

There are some who will claim, and justly so, that you cannot compare IDF soldiers that have a “binding moral code” that do not kill the Palestinians with premeditated intention, to a “Palestinian soldier” full of “murderous intent” towards the Israelis.

Those people would ask me, how can you compare between the Palestinian murderer of your son Arik or our children, and a IDF soldiers that uphold the principle of “Purity of arms?” My answer is that as part of Israeli “Purity of arms,” 1,300 Palestinian minors were killed!!!

We must realize and understand that Palestinians see the Palestinian prisoners — the same prisoners perceived in Israel as terrorists — as heroes fighting for the freedom of their homeland. So, just as we rejoiced and celebrated the liberation of Gilad Shalit, so do the Palestinians wish to see the release of their own prisoners of war.

Is whoever slaughtered in cold blood the children of the Pollack family or the sweet baby Shalhevet Pass indeed a Palestinian “Freedom Fighter” or an animal? Could a suicide bomber on a bus or in a restaurant who kills civilians, including children be considered as a “Freedom Fighter?”

Indeed, there must be a humane red line that mustn’t be crossed, and whoever crosses it cannot be considered a “Freedom Fighter”. The red line should be put at the premeditated murder of children, or a cruel and sadistic murder.

The Palestinian suicide bomber, as hard as that is to take in, is nothing but another victim of the conflict. His desire to spread fear and terror amongst the Israeli population is nothing but a response to his own population’s feelings of fear, terror and utter devastation under the Israeli occupation.

The Palestinian public is frustrated. On the one hand, it wants to see its prisoners of war freed from Israeli captivity, just as the Israelis wanted to see Gilad Shalit freed, yet on the other hand, Israel releases inmates/prisoners of war only as part of “bargains,” mostly those struck with the Hamas. The Palestinians learned that if they want to bring Israel to its knees, they must use force, or they must kidnap in order to get back their own people.

Netanyahu, who coined the phrase “They will get when they give” is strengthening Hamas while at the same time weakening Abu Mazen, assuming that the worse the Palestinian situation will get, Hamas will gain more power, and as a result the world will not put pressure on Israel to make peace with “murderers”.

Currently Abu Mazen is demanding — as he has been demanding for years — the release of Palestinian prisoners of war. Abu Mazen knows the Palestinians will cheer him on for releasing the prisoners and that will strengthen his position and power, but Netanyahu is aware of this and will do anything to make sure Abu Mazen doesn’t get any “credit points” from his people.

Nineteen years ago, my son Arik fell in battle with the Hamas. Israel canonizes its fallen, yet, to my deep sorrow, defiles its citizens. If Netanyahu truly wanted peace, he would release the Palestinian prisoners of war – the non-sadist ones — without the hypocritical and sanctimonious “bookkeeping”.

About the Author
Yitzhak Frankenthal is the Executive Director of the Fund for Reconciliation, Tolerance and Peace, and has in the past founded and managed the Parents Circle — Families Forum, an organization made up of over 500 Israeli and Palestinian bereaved families.
Related Topics
Related Posts
Yitzhak Frankenthal
Comments