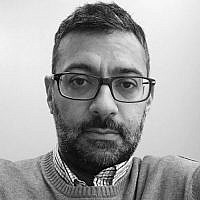 The Blogs
Marcelo Wio
Apply for a Blog
Advertisement
Please note that the posts on The Blogs are contributed by third parties. The opinions, facts and any media content in them are presented solely by the authors, and neither The Times of Israel nor its partners assume any responsibility for them. Please contact us in case of abuse. In case of abuse,
Report this post.

The Jaffa Gate in Jerusalem

It’s not really a novelty. Freezing time – pretending to do so – to await the arrival of a utopia (that justifies every action, behavior, silence), that is, postponing the future until preconceived conditions are optimal. But Palestinian leaders, with the invaluable collaboration of international entities such as UNRWA (which, inflating the number of refugees and their claims, sustains the illusionism, perpetuates the conflict), many NGOs and media have excelled in this practice by decreeing a continuous tragic “offense” – the “Nakba”, or “catastrophe”- that must be atoned for before the advent of an immaculate Arab and Muslim homeland in what is today Israel, the West Bank, and Gaza.

That’s why their leaders have consistently said no to every single peace offer, to any chance of building their own state – while oppressing their own citizens and engaging in corruption. Nothing must happen, time must remain static. It’s all – the return of a past tailor-made for present needs – or nothing – a provisional nothing, since the utopia is always waiting to be fulfilled, to be deserved.

But, without (fluid) time – cancelled, or temporarily halted and turned into a cycle of recurring events and feelings – there can’t logically be any future. Not only that, as Shevek, the central character of Ursula K. Le Guin’s novel The Dispossessed, said,

“our sense of time involves our ability to separate cause and effect, means and end. The baby, again, the animal, they don’t see the difference between what they do now and what will happen because of it. They can’t make a pulley, or a promise. We can. Seeing the difference between now and not now, we can make the connection. And there, morality enters in. Responsibility. To say that a good end will follow from a bad means is just like saying that if I pull a rope on this pulley it will lift the weight on that one.”

Now being always now results therefore in an everlasting present (or wound) – or, perhaps more accurately, in a cycle of events repeating over and over again along the same short orbit around an ideology, a convenience – which implies the lack of responsibility for the future, and means that the “offense”, the “wound” is always being inflicted. And, most of all, it results in the suspension of moral judgment: anything goes until the restoration of history; that is, of the vision of Arab-Muslim regional hegemony.

Time stopped. Responsibility suspended. It’s almost obvious to expect that means and ends become so entangled that it becomes impossible to distinguish one from the other. Although, perhaps means and ends were already so similar to one another from the very beginning, that the “time-freezing strategy” was the most convenient method to disguise such a reality: Arab supremacism and antisemitism as ones of fundamental drivers of Arab-Palestinian leadership.

Not for nothing Fatah’s charter calls in its 12th articles for the “complete liberation of Palestine, and eradication of Zionist economic, political, military and cultural existence” through violence,” and the PLO’s one states that “Palestine [with the boundaries it had during the British Mandate] is the homeland of the Arab Palestinian people; it is an indivisible part of the Arab homeland, and the Palestinian people are an integral part of the Arab nation.”

In addition, while addressing in 2017 the Organization of Islamic Co-operation, Fatah’s and Palestinian Authority’s leader Mahmoud Abbas said that the Jews – because the Quran does not mention Israel o Zionists; no alibi there – “are really excellent in faking and counterfeiting history and religion. […] if they would like to fake this history, they are really masters in this and it is mentioned in the holy Qur’an they fabricate truth and they try to do that and they believe in that….”

So, once inside that “logic”, that dreadful orbit the leaders force their people to follow, to focus in (to disregard corruption, among other things), the only way out, that is, to reestablish the fluidness of time, of history, is through complete fidelity to the “cause”, i.e., obedience to the leaders and absolute dedication to the cause.

And what is more absolute and committed than life? What is the value of individual life if collective utopia is waiting at the end of the tunnel, so to speak, if even Paradise (a shortcut to utopia, or a higher version of it) is promised for those who offer themselves as means to the end – in short, as ends to the end?

So, following all of the above, the means become as sacred as the ends – “The Islamic Resistance Movement maintains that the land of Palestine is Waqf land given as endowment for all generations of Muslims until the Day of Resurrection,” as Hamas’s charter article 11 states, or as the Head of the Waqf’s Al-Aqsa Academy of Heritage and Antiquities Najeh Bakirat said in June 2016 in the official Palestinian Authority TV:

And the end, it is said, is inevitable. And like always – or almost always – it requires the staging of a pathetic, though no less cruel, drama: the “martyr’s” shed blood will bear witness to the inevitability of that glorious and pure destiny outside of the still cycle of time and pave the way for the realization of that utopia.

Paradoxically (or not so much), utopia needs violence. This resonates, with a few minor adjustments, with what Yuri Slezkine described in his book The House of Government about the Communist revolution:

“Violence generally made good theoretical sense. All the Bolsheviks expected it as a part of the revolution, and no one could possibly object to it in principle. Marxism was an apocalyptic movement that looked forward to the times of woe on the eve of the millennium, and the Bolsheviks, of all the Marxists defined themselves in opposition to appeasement. As Marx had written, in a passage made famous by Bukarin, ‘We say to the workers: ‘You will have to go through 15, 20, 50 years of civil war and national struggles not only to bring about change in society but also a change in yourselves.’’”

Timelessness, suspension of responsibility, inevitability, purity of the goal… Thus, children are sent to validate the sacredness of the utopia with their lives. Death becomes the most valuable quality of life…

That is why Fathi Hammad, who was Hamas’s Interior Minister, said on Al-Aqsa TV on February 29, 2008, as reported by MEMRI:

On March, 2014, it was Hamas leader Ismail Hanya’s turn to remind of the role of death – that is, another’s death – in Palestinian society:

“Yes, we are a people that yearn for death, just as our enemies yearn for life. We yearn for martyrdom for the same goal for which our leaders died…”

But this is not the exclusive realm of Hamas. As Palestinian Media Watch documented, Fatah Central Committee member – and former Director of Palestinian Authority’s General Intelligence Service – Tawfiq Tirawi “expressed his satisfaction with his 2-year-old son on official PA TV (Oct. 27, 2015) in this way:

“The Palestinian by nature and education feels a sense of belonging to the land and the homeland. Listen, my son is two years and ten months old. Yesterday, he sang to his mother: ‘Escort the Martyr to his wedding.’ He doesn’t know the meaning of this song (i.e., the Islamic belief that Martyrs marry 72 Virgins in Paradise). Today his mother told me that he sang: ‘Daddy, buy me a machine gun and a rifle, so that I will defeat Israel and the Zionists.’ A boy who is not yet three! A Palestinian grows up with a feeling of belonging to the land, the homeland, and the people.”

It certainly is a strange way of belonging that which demands death as an offering, as proof of that belonging. The most exclusionary form of belonging.

The head of the Palestinian Authority and Fatah’s leader, Mahmoud Abbas – who is stubbornly portrayed, against factual evidence, as a “moderate” – said in September 2015:

“We bless every drop of blood that has been spilled for Jerusalem, which is clean and pure blood, blood spilled for Allah, Allah willing. Every Martyr (Shahid) will reach Paradise, and everyone wounded will be rewarded by Allah.”

More recently (May, 2018), Hamas’s leader in Gaza, Yahya Sinwar once again indicated to his people, in no uncertain terms, what is expected from them. It would not have been difficult for the rest of the world to learn of his dark message, to get a glimpse, however small, into the worldview of the Palestinian leaders, but a large majority of the media censored that reality for their Western audiences.

“When we decided to embark on these marches, we decided to turn that which is most dear to us – the bodies of our women and children – into a dam blocking the collapse in Arab reality, a dam to prevent the racing of many Arabs towards the normalization of ties with the plundering entity, which occupies our Jerusalem, plunders our land, defiles our holy places, and oppresses our people day and night.”

Neither Haniya nor any of the Palestinian leaders yearns for death. They actually are doing quite well, thank you. They keep the orbit moving – and their people in it – with their repeated and empty slogans, their hollow promises, and their sycophantic lies as if they were doing a divine task: such is the deceit.

But there is time. It flows. There’s nothing sacred about a promise of genocide, about ethnic and religious supremacism. Blood shed does not purify any soil nor any cause; it simply makes life impossible for those who lose it. And, of course, there is the Palestinian leaders’ benefit: they prosper, millionaires, secure, hypocrites.

And, all things considered, a shameful part of the media fattened on endless “news-junk food” that they regurgitate for their audiences – all the while pretending it is French food and that they are conscientious “chefs.” But what they are doing is feeding the orbit. No glory there. Just ignominy.