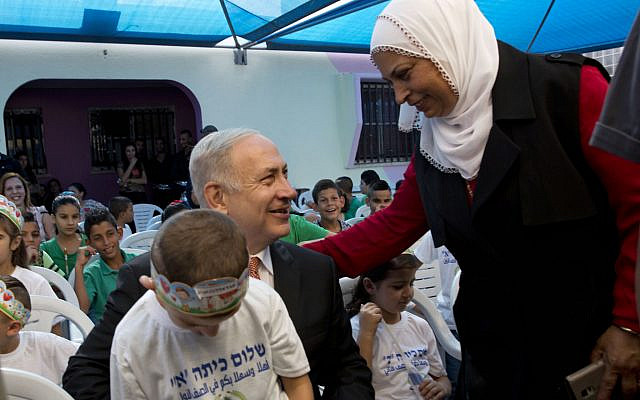 Illustrative: Prime Minister Benjamin Netanyahu poses for a photograph with pupils on the first day of school in the Israeli Arab town of Tamra, September 1, 2016. (AP/Sebastian Scheiner)

The inauguration of Joseph Biden as the 46th president of the United States next week will take place just eight days short of the first anniversary of the “Deal of the Century,” announced at the White House by outgoing President Donald Trump and Israeli Prime Minister Benjamin Netanyahu. By then, what was hailed as a paradigmatic shift in Israeli-Arab relations which bypassed the Palestinians may yet prove — in stark contrast to the declared objectives of its drafters — to be the necessary jolt that will lead to a renewed quest for the resolution of their century-old conflict with Israel.

“Peace to Prosperity” (the official title of the Trump plan) was presented as a means to secure Israel’s control over the bulk of the area between the Mediterranean Sea and the Jordan River, leaving two non-contiguous areas covering just over 60 percent of the West Bank as a possible basis for a mini-Palestinian state at some point in the future. Although rejected out of hand by the Palestinian Authority and almost the entire international community, its operative assumption — that an accord with the Palestinians was no longer a precondition for normalization with the Arab world — inevitably upended the existing conventional wisdom that had informed all Israeli-Palestinian negotiations in the past. This shift has taken on concrete form with the normalization of relations with the United Arab Emirates, Bahrain, Sudan and Morocco, leading to extensive discussions with other states as well — most notably Saudi Arabia and Indonesia. This dynamic has not, however, necessarily eclipsed the centrality of the Palestinian issue. To the contrary: barely 12 months after its formal launch, the Trump-Netanyahu initiative may have come full circle, opening the door for a lasting Palestinian-Israeli accord in a vastly altered Middle East.

Three main processes set in motion a year ago may now be coming together to reinstate the Israeli-Palestinian relationship as the key to a sustainable regional reordering. The first is the manner of the formalization of ties between Israel and parts of the Arab world. Initially prompted by Trump’s desire to show support for a fortified Israel on the eve of the American elections, it was greeted by key Gulf states and then by other countries as an opportunity to extract valuable benefits from the United States (advanced weapons to the UAE and Bahrain, removal from the list of terrorist states in the case of Sudan, recognition of Moroccan sovereignty over the Western Sahara). It also fit into their common fear of Iranian influence in the region. When combined with their growing disinterest in Palestinian issues and with a rising concern with internal matters (including controlling the spread of the coronavirus pandemic), the incentives for amplifying heretofore clandestine relations far outweighed any possible pushback.

Contrary to the “peace for peace” mantra consistently proclaimed by Netanyahu, this move not only came with tremendous costs for the United States, it also exacted a real price from Israel. Arab leaders justified the formalization of relations with Israel by underlining their success in preventing Israel’s unilateral annexation of portions of the West Bank and by the reiteration of support for Palestinian self-determination. Indeed, the dynamic of developments in recent months has reinforced the importance of the Palestinian question for any further Israeli progress in the region, with the Saudis pointing to this connection most explicitly. Even if many Israeli leaders have tended to underplay this link, it will loom large in the coming months, especially in light of the calumny associated with the waning days of the Trump presidency.

At the same time, the bourgeoning relations with these countries have been based on the premise of mutual benefit. As specific trade and investment agreements have been ironed out, tourism encouraged, cultural exchanges fomented, and an intricate web of interchanges nurtured on an equal basis, Israeli attitudes towards residents of these countries are undergoing substantial change: rapprochement is coming together with an unanticipated historical and cultural openness. The upshot is that many Israelis are experiencing qualitatively different, egalitarian-based, relations with an Arab world, of which the majority had considered fundamentally hostile in the past. This may yet have an impact on attitudes towards Palestinians as well.

This process relates to a second, potentially transformative, internal Israeli one. If at the outset the overture towards the Gulf states was presented as a means of promoting Israeli control over the West Bank, political exigencies during the past few months have wrought significant changes in attitudes towards the heretofore systematically assailed Arab community within the country. As the possibility of new elections loomed large, it became clear to the chairman of the Likud, Benjamin Netanyahu, that his political future was becoming more dependent on the behavior of Arab voters than he had imagined.

This realization first surfaced when his efforts to avert early elections this past summer necessitated wooing the support of Ra’am (the United Arab List) segment of the Joint Arab List. This involved an unprecedented appearance in Member of Knesset Mansour Abbas’s committee on violence in Arab society, accompanied by a pledge for additional resources to curb what has become the most salient issue in these quarters. As time progressed, he sought to secure the support of Abbas and his faction to avoid the dispersal of the Knesset by promising a one-year extension of a multi-billion allocation to develop essential infrastructures in Arab communities. And since, he has unabashedly worked to both definitively divide the Joint List and to directly court Arab voters, who have potentially become the difference between a right-religious victory and defeat.

The votes of Arab citizens of Israel have, in fact, become critical for the outcome of the March 23rd elections. Virtually every party (with the exception of the religious parties, Naftali Bennett’s Yamina, and possibly Gideon Sa’ar’s New Hope) are going out of their way to put Arab candidates in realistic slots, including Liberman, Ya’alon, Lapid, Huldai, Shelach and, of course, Meretz. The appeals to this audience differ. Parties on the right and center distinguish between Arabs and Palestinians; those on the left of center address Palestinian citizens of Israel. The former highlight individual and cultural rights, the latter also speak to collective rights. Although all talk about Jewish-Arab partnership, they imbue this phrase with very different meanings — ranging from a patronizing approach on the right to a progressively egalitarian one, as one moves from the center to the left.

Even as members of Arab society in Israel have become the focus of intense electoral competition, the government has continued to consolidate the Jewish presence in the West Bank, promoting settlement construction and expansion, legalizing outposts, constructing new roads, and demolishing Palestinian homes. In its mind, it thereby seeks to place a wedge between Arab citizens of the country and Palestinians. These efforts are being thwarted by the vast majority of the center-left and, needless to say, by almost all Arabs inside the country who self-identify as Palestinian-Arabs. Whatever the outcome of this intriguing political tug-of-war, this dynamic reinforces the legitimacy of Israel’s Arab community and of their specific interests and needs. This legitimization, especially if the election results bring about the ouster of Netanyahu or are indeterminate, lays the groundwork for the placement of Israel’s relations with the Palestinians once again at the top of the national agenda.

At this stage, a third process is now coming into play — the impact of the incoming Biden administration on the Middle East. Although there is widespread consensus that the Israel-Palestine conflict is not, at this juncture, a major priority for the new president — a consistent advocate of a two-state solution — there is reason to suggest that he may be tempted to take advantage of the present constellation to promote a viable accord. As a first step, he will probably revive a Palestinian presence in Washington, renew American support for UNRWA, and attempt to reverse the most egregious elements of his predecessor’s policies (such as recognition of the legality of all Jewish settlements in the West Bank).

Given the precarious legacy that Biden is inheriting, he must try to shore up American influence in the region, especially as he will have to deal, sooner rather than later, with the Iranian conundrum. Revisiting the Palestinian-Israeli issue could prove to be an important tool in resurrecting the role of the United States as an honest broker in the eyes of the emerging moderate alliance still seeking popular legitimation for its complex normalization with Israel.

The convergence of these regional, domestic and American-led processes in the near future means that what started as a purposeful initiative to sidestep the Palestinians may have brought about a complete turnaround. The quest for a new, stable, regional order depends to a large extent on the resolution of the Israeli-Palestinian conflict. That is what the idea of a new Middle East is all about.