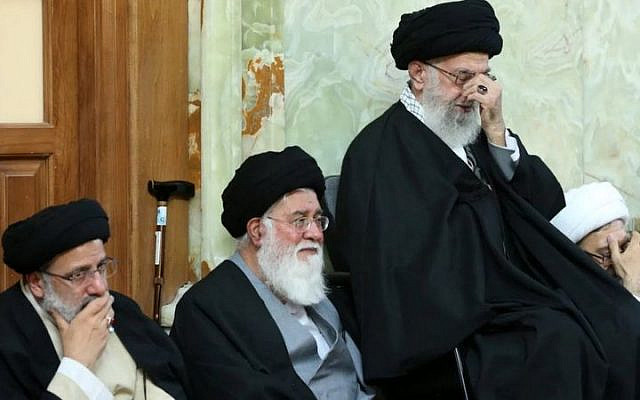 Historically, the religious octopus in Iran after the collapse of Qajar Dynasty, that ruling over Iran from 1789 to 1925, had ruined.

Broadly speaking, Reza Shah Pahlavi, eliminated the noxious Mullah’s structure and they were underground and waited for a proper time. Reza Shah The Great decided to announce the Iranian Republic but the disastrous virus of Shia’ Mullahs surrounded him and said: Shah is the guardian of Islam and Shiism!

However, Reza Shah was forced by the invading British to abdicate in favor of his son Mohammad Reza Pahlavi on 16 September 1941. From that depressing moment, the Shia religious octopus shaped their Terrorist Network among the mosques.

It is important to note that, after the emergence of Khomeini, Shah did not like to execute him. Remarkably, Khomeini got the endorsement of Transnational Terrorist Network from Yasser Arafat, KGB, Libya, Syria to Cuba. Through the channel of Beheshti and others, communicated with Jimmy Carter and the President of the USA, betrayed The Late Shah.

On Dec.31.1977, the Washington Post and NYTimes reported that Jimmy Carter said: Iran because of the great leadership of the Shah is “an Island of Stability” in one of “the more troubled areas of the World”

Alas, Carter believed the fake spiritual face of Khomeini and his CIA and DIA were blind and deaf for the shaping of rebellion inside Iran!

Most importantly, The Shia Mullah’s network put their finger on one historical fake point which was the Saga of Imam Mehdi, the final Imam of the 12 Imams, which was not exist at all. in absence of Imam Mehdi, a Shia Jurist can be leader of Ummah  (the Islamic community).

after The Muslim conquest of Persia or the Arab conquest of Iran which leads to the fall of the Sassanid Empire of  Persia as well as the eventual decline of the Zoroastrian religion from 633 to 654 AD.

following the ruinous attack of  Arab Muslims of Hijaz to Sassanid territory, the destructive Mongol invasion of Iran, was the invasion of the Khwarazmian Empire by the Mongol Empire under Genghis Khan from 1219 to 1221.

furthermore, Once again, the 3rd ravager and destroyer assault was Shia’ Mullahs in the 1979, a minter with no spring insight. when Khomeini came to power and shaped the Islamic republic based on Khomeinism Ideology.

but in reality, the Islamic republic of Khomeini was similar to the Islamic caliphate in the history of Islam. the horrific ideology of Khomeinism is a mixture of Absolutism, Anarchism, Antagonism, antisemitism , barbarism , Charlatanism, Demagogism, Dogmatism, Extremism, Fascism, fanatism, Fundamentalism, Gangesterism, Idiotism, obscurntism, Propagandism, Terrorism, Vandalism and etc. which shaped the structure of current theocratic regime in Iran.

The reality, however, is that, Khomeini from 3 December 1979 – 3 June 1989 killed Iranians, suppressed the opponents, destabilized the Middle East. So far, the legacy of Khomeini was ruin and destruction of Iran and the religious octopus of Islamic Tyranny. from 4 June 1989, a coward leftist Mullah came to power in Iran, who is Khamenei. this is 32 years that he protected Islamic Caliphate with terrorism, suppression, barbarity.

So far, it is not clear that how Khamenei paved the way for emergence of Ebrahim Raisi. More than that, all the world know that whats the criminal background of this new slaughterous President! he is the most prominent figure in the coming circus.

satirically, The American People recognize the winner of election after voting, but in Islamic Republic its different. Iranian know that who is the president before election! even though, The Islamic Republic of Iran will hold presidential elections on June 18, 2021.

Throughout the conflict, Khamenei made his decision without any attention to the public opinion in Iran. This presidential election is critical because it may be intertwined with the case of Khamenei’s successor as 3rd supreme leader of the regime.  in the show, for now, 2 notorious clerics have emerged as the most obvious contenders:  Mojtaba Khamenei, the second son of Khamenei or the main responsible of the brutal oppression , and Ebrahim Raisi, head of Iran’s judiciary.

In effect, the main concern of Khamenei is controlling the process of succession, to make a protection for his son, Mojtaba Khamenei! in the mentality and mindset of the Paranoid Khamenei, he himself is the most important figure in the Islamic World, and he is the second Imam Ali who was the 4th Caliph of the Rashidun Caliphate and his reign was 656–661. this is an illusion. It will be especially true that the history will register that Khamenei’s regime is brutal, unrepentant, and uncompromising!

notably, NYTimes on  Feb. 4, 1979 published the article of  R. W. Apple Jr. ‘ Will Khomeini Turn Iran’s Clock Back 1300 Years?” from Tehran. and he reported the speech of Mehdi Bazargan in a conference.  ” Neither the militant Islamic revolutionary regime of Muammar el‐Qaddafi in Libya nor the semifeudal conservative Government in Saudi Arabia would do as models, he said. Nor would the Ottoman Empire of the 15th to 20th centuries. Nor would the earlier Omayyad and Abbasid Dynasties in Iraq.”

then he added : “What was wanted, said Mr. Bazargan, was a government of the type seen during the 10 years of the rule of the Prophet Mohammed and the five years under his son‐in‐law, Ali, the first Shiite Imam. But that was 1,300 years ago. How is the example to be applied to a country half‐modernized, half‐traditional? What happens to the banks, to the army, to women, to foreign policy? Mr. Bazargan begged not to answer. The Agha would make everything clear in due season. It is impossible to know, despite his triumphant return to Teheran last week, whether the 78‐year‐old Moslem sage will ever come to power. But he is closer to it than ever before, and perhaps the moment has come to try to peer through the smokescreen that he has deliberately deployed to keep intact the disparate elements of the coalition he rallied to fight the monarchy.”

Yet, in many ways, the reality is another story. the 5 years of Ali was similar to Khomeini.  5 years of Ali’s caliphate passed with war, bloodshed, dictatorship and assassination. He brutally suppressed any rebellion and opposition against radical Islam , the reign of bloody sword! However, the lack of clarity over the age of the Ali means that his enthusiastic followers wrote some groundless propaganda which are not real.

paradoxically, the reign of Khomeini and Khamenei is similar to the brutality and tyranny of Imam Ali. so, It also extremely likely that the reign of Ebrahim Raisi will resurrect that horrible period once more