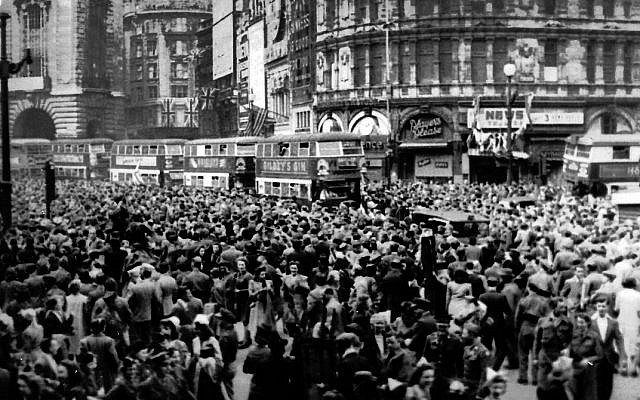 Crowds gathering in celebration at Piccadilly Circus, London during VE Day on May 8, 1945. (Wikipedia)

Seventy-five years ago today, Germany officially surrendered to the Allies, setting off a wave of jubilation in a devastated Europe that had endured six years of slaughter, as well as in a still embattled United States now liberated to turn the full force of its might against Japan. Massive celebrations erupted in cities and towns cheering what came to be known as V-E Day.

Probably nothing captured the moment better than Winston Churchill making his V-sign from a government balcony and declaring “This is your moment,” to a grateful people who had endured the Blitz, years of bloody setbacks and countless lives lost: bells pealed throughout England, as much in mourning as in triumph for a victory won at such great cost. Yet for some of those actually at the front when the guns ceased firing, the response was more muted. As Rick Atkinson writes in “The Guns at Last Light,” his seminal history of the war in Western Europe: “An eerie, profound silence fell across much of the battlefield, and even those astonished to have survived felt too weary, or numb, or haunted, for hosannas.”

There was another soul who could not be there to celebrate, who had died a month earlier — Franklin D. Roosevelt, the architect of the Allied victory over the Axis. What seems inevitable to us in retrospect was anything but — in the fraught times leading up to the war and the early years of the conflict itself. For the first half of World War II, which began in 1939, England was besieged, a good portion of the US was complacent — wary of entering a European war, and Germany seemed invincible, inflicting a series of humiliating defeats on its hapless foes.

Although FDR recognized the intrinsic evil of Hitler and the menace his ruthless global appetites would eventually pose for the US, he also understood the nation’s reluctance to take up arms against an aggressor who seemed so far from our shores. Roosevelt himself had considered retiring after a wearying second-term when he was shaken by the collapse of France under the Wehrmacht’s onslaught in June 1940, and resolved to seek a third term

The president’s first order of business was to bolster America’s military preparedness. In this pre-war era, a complacent US had the 17th largest army in the world, just behind Romania.

Against fierce opposition from a powerful isolationist bloc in Congress, Roosevelt pushed through the nation’s first peace-time draft by a single vote. This was a particularly risky initiative in that it passed in September of 1940, two months before an election. But FDR’s bet paid off. He was re-elected and, when war broke out more than a year later, the US had an army of 1.6 million men. More than 16 million would eventually serve.

FDR’s other signal victory stiffening US resolve against Nazi aggression was his Lend-Lease program that supplied weaponry to a beleaguered Britain standing alone against Hitler. The president’s patient maneuvering, against fierce congressional opposition, led to the passage of Lend-Lease in September 1941. The president had steered the US ever closer to confronting the Axis without actually declaring war.

Roosevelt still faced a powerful isolationist movement, led by Senator Burton Wheeler in Congress, the Republican Party establishment, and the powerful America First movement with a champion in the popular air hero Charles Lindbergh. The America Firsters battened on a widespread public anti-Semitism that saw any effort to check German ambitions as a plot to spill American blood for “Jewish interests.” While a desperate Churchill agonized over Roosevelt’s caution, the president moved prudently.

But move he did. In September, he ordered the War to Department to come up with a contingency study of US options and preparedness in the event of war. The analysis, dubbed the Victory Program, served as a prescient template for US strategy and planning when war came. As it did two months later when Japan attacked Pearl Harbor. On December 11, Hitler joined his Axis ally by declaring war on the US.

Once the conflict was visited on America, FDR took charge. He no longer had to be worried about the isolationists, who lost their credibility overnight. The president’s concerns now were far greater, starting with his own military, as well as his allies who would impose almost as many burdens on him in the ensuing years as would his enemies. But Roosevelt made it clear from the outset that he would set the strategy for the conduct of the war.

Over the objections of some of his top generals, including Eisenhower, Roosevelt insisted on maintaining a policy of Germany first. Against the advice of his War Secretary Henry Stimson and his Chief of Staff George Marshall, he championed the invasion of North Africa as a base for future operations on the Continent. It was here that a US Army, still more rough than ready, learned its soldierly trade against the Afrika Korps. FDR achieved his goals with a deft combination of firmness and charm, but always mindful to keep a steady hand on the tiller.

Most importantly, Roosevelt incorporated the political opposition into his cabinet. Henry Stimson and Frank Knox, the powerful secretaries of War and the Navy, were both Republicans, as were many of the “dollar-a-day” businessmen who would convert US industry into the fabled “arsenal of democracy.” Within two years, American factories would produce a massive array of planes, tanks, artillery and ships, achieving an industrial miracle that served not only America’s own needs but supplied its Allies with critical military support.

Roosevelt’s diplomatic skills, and his patience, were tested in keeping his fractious allies from obstructing the joint war effort in pursuit of their own various agendas. Churchill’s peerless courage was not matched by his strategic acumen. For almost the first three years of the war, the British had been roundly defeated in every land battle they fought against the Germans.

It wasn’t until El Alamein in mid-1942 that Churchill found in Montgomery a general who could inspire troops and win battles — together with the help of 600 Sherman tanks supplied by Roosevelt that proved critical in stopping the Germans from reaching Suez — and Palestine.

After North Africa was secured, while Roosevelt pressed for a cross-channel invasion by 1944 as the most direct route to Berlin, Churchill countered with evasive schemes to attack the Dardanelles, Rhodes, the Balkans and “the soft underbelly” of Italy. Anything but Normandy. Roosevelt finally agreed to open up a second front in Italy, as much to satisfy the Russians as the British. As Nigel Hamilton tells us in “Commander in Chief,” his comprehensive wartime study of Roosevelt and Churchill, the British prime minister never had the stomach for an invasion of France, although he was glad to take the bows once it succeeded. Roosevelt was gracious enough to allow him to do so, since he had long ago made it clear that the US was the senior partner in the Anglo-American alliance.

If Roosevelt had to prod a leery Churchill into a Normandy landing he had to curb his own military from making a precipitous rush across the channel. FDR’s general staff was pressing for a cross-channel invasion as early as 1942, a venture that Roosevelt feared might lead to a debacle with raw troops facing battle-hardened German defenders. He opted instead for the more opportune target of North Africa, where Vichy forces would provide only token resistance. With Morocco and Algeria in American hands, it was at Casablanca that Roosevelt issued his momentous declaration of Unconditional Surrender. This was particularly important for the Soviets who feared that the Western Allies might make a separate peace with Germany.

One of Roosevelt’s most impressive accomplishments was coordinating a common strategy among his skittish allies and within his own ranks. It was this success in balancing the conflicting demands of powerful interests that ironically contributed to some of his failures as well: bowing to demands for the internment of the Nisei on the West Coast; betraying the Poles — who had fought valiantly for the Allies — to the Russians. And failing to do more to rescue the Jewish remnant from Hitler’s grasp.

While it is not the province of this essay to discuss the harrowing ramifications of Allied responses to the Holocaust, it should be noted that it was the swift progress of the Allied forces that rescued thousands of Jews about to expire in the camps and on the death marches in the spring of 1945, an advance that cost more than 135,000 American dead among almost 600,000 US casualties in the last year of the war in Western Europe.

As we observe this 75th anniversary of V-E Day, let us pause for a moment to reflect on the sacrifice of these brave young men in making a better world, and to consider the achievements of the leader who inspired his fellow Americans to help realize it.