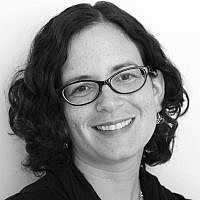 One sunny weekday afternoon in Manhattan my husband and four children and I were traveling on the subway, my husband was sitting with the three girls and I with my 22-month-old baby. It was rush hour, it was crowded people were pushing and the air was getting stifling and suddenly a tall man with a European accent turns to me out of nowhere and asks:

I instinctively answer: “Why are you asking?”

He insists: “Are you Israeli?”‘

I take a moment and think, why am I not answering, why am I being defensive I am a proud Israeli and I would shout it from the rooftops. “In fact, yes I am,” I answer.

He suddenly bursts into a tirade

“Go home, no one wants you here! Get out of this country!”

Completely and utterly shocked, I answer: “That is awfully rude!”

“You are rude!” he answers.

My blood was boiling, I was so angry I couldn’t see straight. I had so many great answers in my head for this obnoxious ignorant man. But then I took a moment and realized that with people like that none of my answers would suffice or convince him. He would enjoy engaging me in the argument, because clearly he was looking for one, and ultimately we would only succeed in annoying the other people on the subway that just want to get home after a long day at work. I also realized that if I started arguing with this man my baby would start crying and then he would also have succeeded in making me look like a bad mother.

So I decided to take the high road and ignore this guy who just yelled at me in the middle of the subway, and instead to smile at my baby and at everyone else around me. Then something incredible happened. People smiled back and started chatting with me about how cute my baby was, and the hater started feeling awkward and isolated He didn’t say a word, and pretty quickly got off the train.

Here’s is the issue, as I see it: There are anti-Semites out there as there always have been. Many hide it in the more palatable anti -Israeliness. There is no way to change that. But the important people in this story are the bystanders on the train. They are the silent majority and they are the people we need to focus on proactively. There is no way to convince the subway anti-Semite that he was wrong, but our obligation is to make sure that he and other anti-Semites feel uncomfortable to speak up and are seen as social pariahs

The question is how do we do that.

I believe this can be done by talking in the same language that is used against us, the rhetoric of human rights. We need to explain that supporting Hamas means forcing women to cover from head to toe, it means giving carte blanche for husbands to beat up their wives, it means forcing young girls to marry, it means excluding women from any significant positions in society. Supporting Hamas means condoning the use of children as human shields; their exploitation for political use; the firing from their schools and orphanages. The Gaza situation is not about Israel, it’s about human rights, crimes against women and children by their own leadership.

Going back to the subway hater, it was certainly not a pleasant experience. But this was only one person. The question is why he felt comfortable enough to say what he said in a packed train, and this is the challenge ahead of us. We need to make sure that those who attack and blame Israel are perceived as attacking human rights in Gaza or anywhere, because this is what they are doing. Supporting Hamas is supporting the annihilation of basic human rights for their people. In retrospect, it’s kind of ironic and at the same time completely logical that a man indiscriminately shouting at a woman and a baby on a subway is not really interested in human rights. We just need everyone else to see it that way.

About the Author
Rachel Azaria is Deputy Mayor of Jerusalem, holding the education portfolio and women's rights portfolio. Azaria earned a BA in psychology and MA in conflict resolution, both from the Hebrew University of Jerusalem. An alumna of the Mandel School for Educational Leadership, Azaria served as the CEO of Mavoi Satum, a non-profit organization helping women denied a get (Jewish divorce) by their husbands. Azaria was first elected to the city council in 2008, and held the Early Childhood Education and Community Councils portfolios in her first term. In 2013 she was reelected and appointed deputy mayor. The Yerushalmim Party, that she chairs, doubled itself in the recent elections. She is an active leader of the struggle against the exclusion of women from the Israeli public sphere, and gained international recognition as a leading orthodox feminist. She lives in the Katamonim (Gonenim) district of Jerusalem with her husband and their four children.
Related Topics
Related Posts
Comments