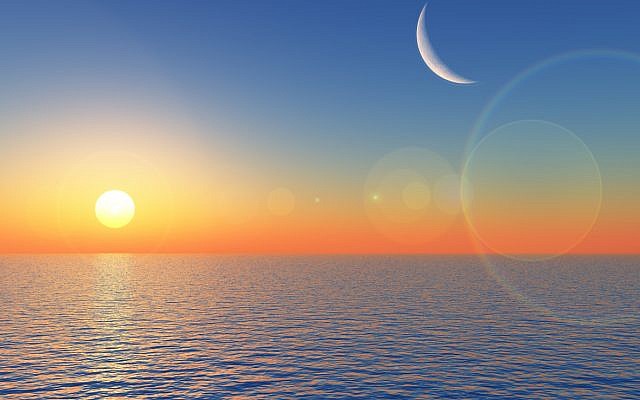 Illustrative. Sunrise over the sea, with a diminished showing by the moon. (iStock)

Many people have established what they call Plan A for themselves. It is their first-choice unfolding of their lives. It is more than a plan; it is an ideal life.

Every so often, people also prepare a Plan B. As its name suggests, it is the backup plan, the less desirable alternative to Plan A.

When you read the first chapter of Genesis carefully, you might well conclude that God too had a Plan A and a Plan B. Moreover, you might perceive much of what actually occurs during Creation as the secondary, less desirable plan. But how can that be? For while people, mere mortals, cannot know how their futures will pan out, to the extent that they make arrangements for alternative outcomes, the Divine surely knows the future! How could God end up stuck with Plan B? How is it even possible that His Plan A did not succeed?

The Torah begins with the phrase, “Bereishit bara Elokim “ (1:1) – “In the beginning, God created…” The use of this specific Name of God, “Elokim,” suggests to the medieval commentator par excellence, Rashi, that at the time of the creation of the world, God had intended to run the world according to the attribute of Judgement. Once the world was created, however, He realized that the degree of strictness under the rule of Judgement could not be maintained, and He added mercy. The next chapter attests to this shift, as it says, “On the day that Hashem Elokim created earth and heaven” (2:4). That is, God’s Plan A was to rule the world with judgment, but once the implementation was impossible, He went with Plan B.

The original question remains, however: didn’t God know how His plan would unfold to begin with?

One complete and utter “failures” of Creation is found in what is known as the sin of the earth. Specifically, God commanded the earth to produce a fruit tree that was producing fruit: “Etz pri oseh pri” (1:11).  According to Rashi, God wanted the earth to produce a tree that had edible bark as its fruit. But the earth did no such thing. Rather, it produced an “etz oseh pri” (1:12) – a tree that bore fruit that was edible, though the tree itself, and its bark, were not.

There are so many puzzling elements to this narrative. For starters, does the earth have free will that it can decide what kind of tree to produce? Shouldn’t God’s command result in God’s intent? – Because the alternative implies that God does not have mastery over everything after all. And finally, how can anything that is inanimate – consider, the very earth itself – commit a sin?

By the same token, God created “two large luminaries” (1:16), as a means of fulfilling Plan A. But the text then identifies a large sun and a smaller moon – an apparent fulfillment of Plan B, in that they were not exactly the “two large luminaries.” This discrepancy led Rashi to cite the well-known midrash that when the moon approached God to complain that two equal rulers could not reign together, the Divine diminished the moon. And we are left to ask the same questions: what does it mean for the moon to have had an opinion at all, let alone push God to revamp His initial idea?

The biblical text contributes another conundrum to our puzzlement. Consider that, after each change – departing from Plan A and implementing what appears to be Plan B – the biblical text provides an assessment of the situation: And God saw that it was good. Does that really mean that Plan B was good? After all, that which emerges from a less-than-ideal situation, or much worse – sin?! – is a far cry from “good.”

Perhaps the most pleasing explanation for these questions is the kabbalists’ explanation that God is perfect (no question there), but the world is not (no question there, either). Thus, God’s Plan A was indeed perfect, but as soon as the idea was attempted in a physical reality, the natural limitations of reality, which include flaws and lesser alternatives, interfered with Plan A’s implementation.

It is not surprising that transforming that which is purely spiritual into the physical turns out to lack the perfection and grandeur of the original. In common parlance, that is simply the difference between the ideal world and being practical. But why does the Torah introduce an ideal world, when it is going to settle, as it were, for the practical, when all is said and done? Once we understand that God knew He was going to develop the world into its practical form, we are even more puzzled that He didn’t simply create the world in that practical form.

What if He had? That is, what if God had begun by creating a world that embodied the physical less-than-ideal state that seems to be the only way the earth can survive? Where would humanity be, under those conditions?

Well, where they wouldn’t be is striving to “fix” the world and bring about the ideal.

When God created the world, and the Torah first presents the original ideal Plan A in its account of creation, humanity learns that the less desirable reality that it experiences is not the be-all and end-all of society. By presenting the original Plan A, God informs humanity that the created world has within it the highest potential that people can reach – to strive and fix the world.

When the inanimate elements of nature – the earth, the moon – ignore God’s Plan A, they instruct humanity in the ways of independence, says the Maharal (15th century Rabbi Judah Loew of Prague). Including the fact that the push for independence may result in rebellion and sin.

Moreover, this world was created as a means to a greater end. Everything in this world has the potential to be used as a tool to serve God completely. That is, the physical world is on equal footing, as it were, with the spiritual world – in that every aspect of it can be functionally appropriated in the worship of the Divine. The very fact that the Torah’s text includes both Plan A and Plan B means not only that both plans are granted great importance, but that people are supposed to appreciate the place of Plan B in their lives. Truly, in all we do – study, work, exercise, vacation, marriage, parenting, and more – we are enjoined to strive to fulfill our mission in this world.

When God created the world to be run with Judgement, His intention, apparently, was for the physical world to be no more than a conduit for the spiritual. But the physical and the spiritual are not always good partners; rather, they may well clash. The story of the earth sinning fundamentally acknowledges that people sin – but more, it indicates that sin is not the ideal, not for the earth, and not for humanity. The very notion that the earth sinned suggests to people that they too can do better.

Absent from the biblical story of Creation, of course, is the midrash that recounts how God created many world before this one, destroying each one in turn, because He was disappointed with the results. To return to our question about God’s abilities – He surely did not need to attempt trial-and-error experimentation to achieve His desired results. Rather, the midrash teaches humanity that God’s many efforts drive the lesson home: one try may not be enough to reach your goals. But once people take on the goal of reaching their potential, they know quite well that they simply need to try again. No matter how imperfect they may be along the way.