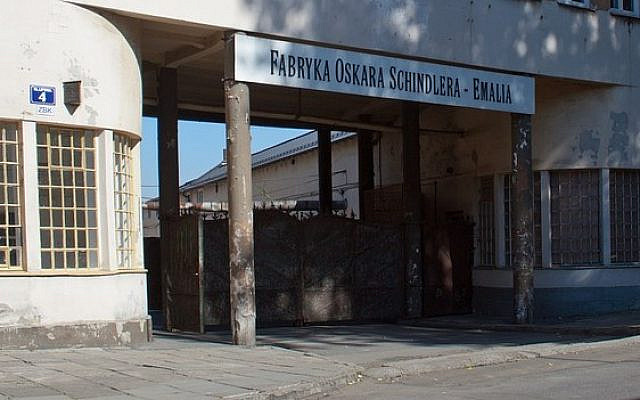 The original entrance to the Emalienwarenfabrik, today it's out of picture to the left with a long line of tourists. (RON PORTER/Independent).

I travel a lot, because I’m curious and love to fly. My recent visit to Krakow was nothing but a distortion of the victims of the Holocaust, but also Oskar Schindler.

Poland has in recent years elected a far-right, Catholic, populist government whose main goals seems to be to forbid abortions, denying any refugees entrance (in direct violation with the Geneva convention) and re-shaping the Polish historical narrative. Just to name a few things which is a disgrace to most people.

My visit to Krakow was for personal reasons, but they have a really nice old city, the old Jewish quarters, cheap food and drinks – and not to mention somekind of majestic castle overlooking most of Krakow. There is an old synagogue and there is a more functional one actually doing service. There are no mosques in Krakow, but there is a lot of churches. They also seem to have very few visible social issues, but if you start to scratch the surface you notice that the Krakowian police arrest homeless people and drop them off in an industrial area outside the city. Mind you Krakow has to look nice for all the tourists.

Anyways, I suppose a viable amount of you readers has been to Krakow, mostly in order to remember the past and never let it happen again. I biked my way out to the Schindler factory. Or to be exact “Fabryka Oskara Schindlera – Emalja”. Once standing in line, purchased my tickets and entered I was a bit stunned. Overwhelmed. Surprised. Disappointed. Angry.

First of all Oskar Schindler is a person that bears the honorable title Righteous among the nations, second of all thousands of slave-workers worked there – mostly jews but alsogypsies, homosexuals and people not fitting in to the nazi-german narrative. Many died during the hardships both in the factory and in the nearby later erected “Konzentrationslager Plaszow”.

The former grounds of the factory, or let’s call it a slave labour camp. Whatever it was, it’s not what it is now. My shock and awe came when I realized this has nothing to do with commemorating those slave workers or Mr. Schindler. Instead the poles has since many years turned it into a museum of polish resistance against the Nazi-german occupation. While such a museum is of a great historical significance – why did they choose to build it in the old Emaljenwarenfabrik? For me this did’nt make sense at all, while in the meantime I was basically stepping on floor that slave-workers had been suffering upon – while reading about how brave the Poles were during the occupation.

This becomes a distortion of truth and I think it’s just what the ultra right wing government in Poland want’s to. It want’s to celebrate it’s heroes and hide it’s dark past – don’t forget what many Polish resistance groups did against jews or others in a bad spot.

But the biggest distortion of truth came later for me. The next day I decided to bike to Konzentrationslager Plaszow – I was’nt expecting anything to be left there or be able to see any remnants and remember in silence. So what is KZ Plaszow today? It’s an empty heep of land filled with high grass, if you are a bit imaginative you might be able to notice ditches where executions took place but that’s about it. I parked my bike and started wandering around the area, I found an old Soviet era monument to those who died and survived Plaszow. But not a single word from the Polish government, not a sign – nothing. Nada.

Oh, by the way there is some sort of a small industrial factory on some of the grounds now producing refined fuel for farming machines. And a lot of signs of NO ENTRY to that place. Which is totally irrelevant for my visit anyway.

I walked back to my bi-cycle and started chugging my very sun-heated water and relaxed a bit in the shadow. Just trying to process everything, trying to learn something and imagine how it must have been there during the winters – KZ Plaszow is kind on top of plateau and it was windy.

Suddenly, out of the middle of nowhere I saw a car racing towards me like a rally car with blue lights on top. Yeah – it was the police. “Dzien dobry” they said, while stepping out of the car and realizing I don’t speak a word of polish and their english was not exactly top notch. Anyways after some google translating the whole KZ Plaszow is a closed off area – no one is allowed to enter and god forbid if you take pictures there or just like me – sitting under a tree in the shadow and contemplating.

I was’nt too keen on getting arrested for trespassing in Poland, so I apologized in every language I could and biked away. The police car followed me all the way to the entry road and then taking off. Note that there is no sign that you are not allowed to enter.