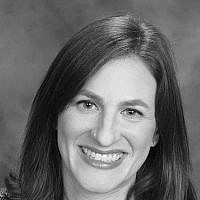 The Blogs
Gail Katz
Apply for a Blog
Please note that the posts on The Blogs are contributed by third parties. The opinions, facts and any media content in them are presented solely by the authors, and neither The Times of Israel nor its partners assume any responsibility for them. Please contact us in case of abuse. In case of abuse,
Report this post. 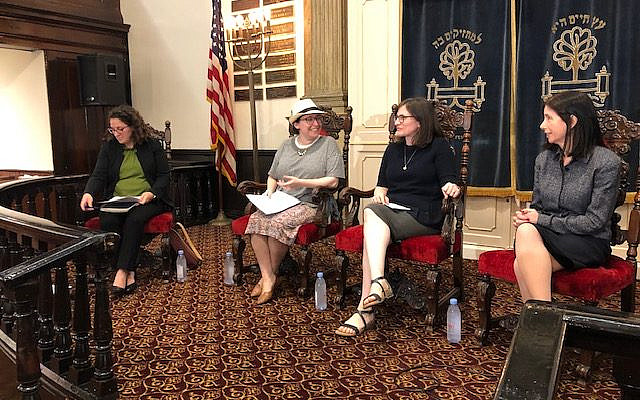 Author, Gail Katz (second from the right) speaking at a JOFA 2019 program, "My Body. Whose Decision?

The typical pro-choice and anti-abortion positions in debate in American society today do not line up well with halakhic views on abortion. Halakhah never frames the issues in terms of individual choice, nor does halakhah talk in absolutes around the theology of when life begins. Rather, the issues are framed in terms of the value of life — the value of the mother’s emotional and physical self, balanced with the level of development of the fetus into a living being. Thus, the question arises for Jewish advocacy groups and individuals — how do we advocate for our ability to preserve and practice halakhah in the face of secular laws that really don’t fit within the halakhic framework?

Jews across the board, from both traditional and secular Jewish organizations, have weighed in to assert broad rights of freedom of religion under the Constitution on behalf of all religious minorities.

Jews have a rich history of weighing in on secular law when it comes to freedom of religion. Generally, though, we weigh in when secular laws impose an obstacle to our ability to practice our religion. Decades ago, Jewish groups took a fairly uniform approach in front of the Supreme Court, seeking the broadest possible reading of the Constitution to protect religious freedoms. Jewish groups weighed in frequently on behalf of themselves, as well as other religious minorities, including Muslims. Examples included advocating for the Jewish man who wanted to wear his kippah in the military, and for the Native American tribe that wanted to smoke peyote. (Peyote is a banned substance under secular law, but is used in the tribe’s ritual practice.) Jews across the board, from both traditional and secular Jewish organizations, have weighed in to assert broad rights of freedom of religion under the Constitution on behalf of all religious minorities.

That approach has been challenged in recent years by a slew of cases on behalf of a new kind of plaintiff. In the past decade or so, Christian groups, feeling threatened in their religious practice by changing cultural norms on issues such as contraception, sexual orientation, and gender identity, have begun to seek broad protection for their religious practices as well. The practice of a majority religion seeking broad protection from anti-discrimination laws under the guise of religious freedom has placed members of minority religions, including Jews, in the awkward position of pitting the value of expansive freedom of religion against another very necessary value of expansive antidiscrimination laws.

Two Cases that Have Shaped Jewish Advocacy
Two recent cases show the awkward position in which Jewish advocacy groups have been placed. In Burwell v. Hobby Lobby Stores, Christian business owners argued that the Affordable Care Act, which mandates that employers provide insurance coverage for their employees, including provisions for contraception, violates their religious freedom because in their religious practice, contraceptives are prohibited. The court ultimately agreed that this was a violation of their free exercise of religion under the First Amendment.


In Masterpiece Cakeshop v. Colorado Civil Rights Commission, a Colorado baker asserted that Colorado’s LGBT anti-discrimination laws violated his practice of his religion in requiring him to provide business services for a same-sex wedding. In that case, the Supreme Court did not decide the issue directly, but found that the Colorado Civil Rights Commission had treated a sincere religious belief with hostility and sent the case back to Colorado to make a neutral, non-hostile determination on the law.

In both cases, Jewish organizations weighed in, but this time they were split. Some groups advocated on behalf of the Christian business and on behalf of the baker, arguing along traditional lines, that any assertion of a religious practice should be supported and should not be questioned through government intervention, and that these people had a right to assert broad religious freedoms under the law.

Others, however, viewed the case from a very different lens — the lens of discrimination. They argued on varying legal grounds against the baker and against the Christian-owned business, ultimately asserting that the government did have a broad right to enforce anti-discrimination laws, and should prohibit the baker from using religion as a basis to discriminate.

Why Jews Split on Cases
The split highlights the fact that expansive freedom of religion laws, as well as broad anti-discrimination laws, are both necessary for the survival of Jewish and other minority religions in America. Thus advocacy splits in two directions, with organizations trying to balance two important values.

What is interesting to me with respect to abortion is that it actually should be less complicated than these cases. I would argue that there is near consensus in halakhah that, at least under certain circumstances, almost every rabbinic decisor holds that an abortion is not only permitted, but likely is mandated. That might occur only under the narrowest of circumstances regarding the rodef (pursuer), when the fetus might be endangering the life of the mother. Or one might take a more expansive view and permit or mandate abortion in other circumstances as well. In either case, there is agreement among Jewish legal advocacy groups that for our practice of halakhah we need the ability and the legal right to practice abortion in certain circumstances. It is not just theoretical. A ban on abortion would literally limit our ability to practice halakhah as we need.

Therefore, our role as Jewish advocates should be clear cut: We should oppose any restrictions on the legal right to abortion. Why? All the proposed restrictions are unhelpful to a halakhic analysis for any observant women’s individual case.

Therefore, our role as Jewish advocates should be clear cut: We should oppose any restrictions on the legal right to abortion. Why? All the proposed restrictions are unhelpful to a halakhic analysis for any observant women’s individual case. The boundaries that halakhah places on abortion do not line up in any way with the restrictions that states place on abortion. Halakhah does not speak in terms of viability. Halakhah doesn’t identify a specific number of weeks wherein life begins. Halakhah doesn’t talk about whether the medical provider needs to be board certified. None of those things match up with the boundaries that halakhah places on abortion. Women and their poskim faced with these restrictions could find themselves without options to make decisions in accordance with their view of the halakhah.

Positions Taken by Orthodox Authorities
In 1990 the Rabbinical Council of America (RCA) passed a resolution stating that the RCA:

-Takes note of the different values of the many religious communities in America that are often at variance with one another, in the nature of a politically pluralistic society;
Is aware that the question of abortion is currently in the forefront of moral concerns in American society;
-Proclaims that neither the position of “pro-life” nor the position of “pro-choice” is acceptable to halakhah;
-Precludes the endorsement of legislative measures which would impede the appropriate application of halakhah;
-Calls upon the total Jewish community to acknowledge that abortion is not an option, except in extreme circumstances and in consultation with proper halakhic authority.

Thus, the concept that abortion should follow halakhic guidelines without government interference seems to be a reasonable position that a Jewish organization could take.

However, Agudah chose to take a different tact. Agudah filed an amicus brief in 1992 in Casey v. Planned Parenthood, the case that followed Roe v. Wade. Roe had found a constitutional right to abortion, whereas Casey determined that the right was not unrestricted and states could place limits on that right.

Agudah argued that Roe had been wrongly decided. It argued that the Constitution does not grant any right to abortion; the Constitution, however, does provide a right to free exercise of religion. Therefore, the only way an abortion is constitutional, according to Agudah, is if a woman asserts her right to an abortion under her freedom of religion right. In essence, Agudah was saying, “Abortion should be banned, unless the woman has a note from her rabbi.”

In 2019, the RCA shifted from its 1990 resolution in its response to New York’s Reproductive Health Act, passed in the same year. The new law lifted restrictions on abortions in the state. The RCA opposed the lifting of the restrictions; in discussing its opposition, the RCA moved away from its 1990 statement, in which the RCA had said that abortion is permitted only when halakhah says it is permitted, but here it talked about abortion as murder and even lamented the state of our society “where killing babies is no longer construed as immoral.”

We have always advocated for the least restrictive state intervention and for the broadest possible freedom of religion.

Bad Strategy for Freedom of Religion
Putting aside everything that is wrong with that statement, including its horrific language, it — together with the Agudah position — denotes probably the only time that Jews have ever sought for the government to impose restrictions on our ability to practice halakhah and then ask to carve out some exceptions for the practice of our minority religion. We have always advocated for the least restrictive state intervention and for the broadest possible freedom of religion. Oddly, however, here Jews are advocating for state restrictions that do not align with halakhah. We are really asking the state to act in a way that imposes a burden on our practice of religion.

We can advocate for freedom from state intervention while still aligning ourselves with our halakhic views.

The state is, by definition, oriented toward the majority. The judges who sit on our highest courts are majority-oriented. For a minority, asking for restrictions and relying on the good will of the majority for carve-outs is the ultimate in a losing long-term strategy. Abortion differs from the Hobby Lobby and Masterpiece Cakeshop examples, in which the impact of broad freedom of religion laws can come in conflict with the impact of broad anti-discrimination laws. There, advocacy is going to have to be nuanced, and reasonable minds can differ on strategy. In the case of abortion, however, there is simply no need to compromise on either of those principles in our advocacy. We can advocate for freedom from state intervention while still aligning ourselves with our halakhic views. Otherwise, we are playing a dangerous game that relies on the continuing good will of a majority-led legislative body and judiciary to carve out exemptions — now and in the future — for our ability to practice halakhah as we define it.

This article is being reprinted with permission. It first appeared in the December 2020 JOFA Journal.

About the Author
Gail is the Chief Intellectual Property Counsel for Envista Holdings Corporation and a JOFA board member.
Related Topics
Related Posts
Comments