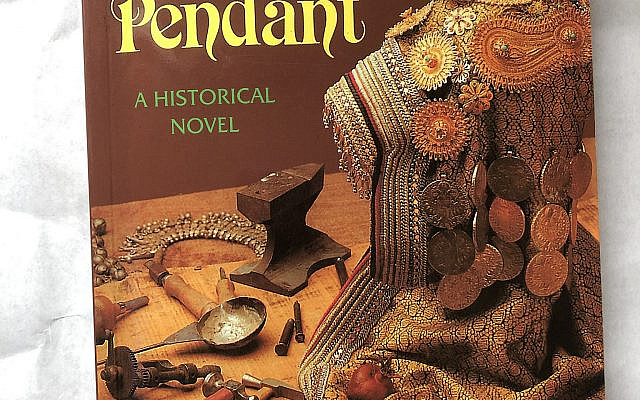 The pomegranate pendant of the title was fashioned in gold as a wedding gift for Mazal, a 14-year-old Yemenite girl who is the narrator of the book. The events she recounts begin in the capital of Yemen, Sana’a, in the modest home where she lives with her parents and siblings. Her father, a skilled artisan who fashions the intricate filigree jewelry that is produced by many of Yemen’s Jews, informs his daughter that his apprentice, Ezra, has asked for her hand in marriage, and that he, her father, had given his approval. The pendant was made by Ezra, as a gift for his bride.

Maz’Theal is prepared to follow the custom of the Jews of Yemen and marry while still a teenager, and also to do as her father has decreed, and go to Jerusalem with her young husband and a group of Yemenite Jews in order ‘to prepare to welcome the Messiah.’

The events of the journey across difficult terrain, on foot and on muleback over land and sea, are described in terrifying detail, and the reader is almost able to experience for herself what it must have been like to endure the arduous conditions of travel between the lands of the Middle East in the late nineteenth century. The book recounts the difficult living conditions in Jerusalem, in the country then known as Palestine, which was part of the Ottoman Empire. The group of Yemenite immigrants was initially viewed with suspicion by the Ashkenazi Jews who lived in Jerusalem at the time, but were eventually able to establish their homes there, within the walls of the Old City.

The author has undertaken a great deal of research, and thus the reader learns about the customs and way of life of both the Yemenite and the Ashkenazi Jews of Jerusalem at the time, the history of the various groupd of residents, and the various historical events which determined their fate.

The First World War results in the demise of Turkish rule and its replacement by the British Mandate, as a result of which the city of Jerusalem grew and developed. Immigration by Jews from other parts of the world increased, and the Land of Israel flourished despite the material and political hardships and the opposition of the Moslem population.

While I enjoyed learning about the way the Jews of Yemen lived and flourished in Jerusalem and its environs, I found the general tone of the book somewhat didactic, as is inevitable, I suppose, in a book which seeks to provide information about events which actually happened. I recommend the book as a rich source of information about a part of Jewish history which has tended to be overlooked in the annals of Zionism and the return of Jews from all over the world to their ancient homeland.