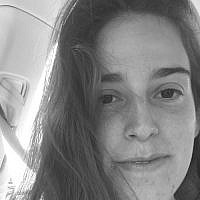 The Blogs
Maya Rubin
Apply for a Blog
Please note that the posts on The Blogs are contributed by third parties. The opinions, facts and any media content in them are presented solely by the authors, and neither The Times of Israel nor its partners assume any responsibility for them. Please contact us in case of abuse. In case of abuse,
Report this post.

Judaism has always played an integral role in my identity as a child, sister, daughter, and friend. Jewish teachings such as “Tikkun Olam” and “Lashon Harah,” Jewish holidays, the practice of Shabbat, our heritage as a people, our collective suffering and collective ability to form a community almost anywhere, and our rich traditions, have greatly informed who I am today. As I reflect on my time learning how to treat a friend in kindergarten, reconciling awkward moments in middle school, being with my parents at home, traveling with friends, and exploring my intellectual interests in college, one thing seems to be present, clear, and at the center of how I experienced these moments: through the prism of Judaism. My love and connection to Judaism, although constantly evolving, and perhaps, not always at the forefront, is deeply ingrained in how I view myself, the world, and my place in it.

I have asked (and been asked) to describe what makes Judaism special to me, and unlike any other religion in the world. While I believe every religion is unique in its practices, Judaism is deeply rooted in its adherence to tradition and custom. This allows its spirituality, and heritage, to become accessible through a commitment to ritualistic practice. Many Jews, religious or not, grow up understanding fundamental Jewish rituals: Shabbat, Kashrut, lighting the Chanukah candles, eating matzah, shaking the lulav and etrog etc. While I love these practices, there is so much more to the Jewish religion than celebrating its holidays or practicing its teachings through food, storytelling, and physical customs.

One tradition that has intrigued me for as long as I can remember is Sefirat HaOmer, the counting of the Omer, a 49 day pursuit of spiritual reflection and introspection that bridges the holidays of Pesach and Shavuot. What I find to be so interesting about the Omer is how representative it is of many common Jewish themes.

The word “sefirat” comes from the shoresh, or Hebrew root, “SFR” which means “count” or “tell.” This refers to the counting of each day of the Omer, and highlights the significance of numbers and the marking of time in Judaism. I sometimes found the counting somewhat meticulous. I would recite: “today is ten days, which is one week and three days of the Omer.”

Despite the fastidiousness of the counting, this ritual rooted me in the ways that Judaism’s foundation is built on the act of marking time. Holy days like that of Shabbat and Yom Tov are marked sunset to sunset, confined to a 25 hour window. When lighting Shabbat candles, there is an 18 minute window of time in which loopholes are allowed. At 13- and 12- years old, Jewish boys and girls, respectively, reach the time in which they become men and women, marking those years as significant transitions in time, and in life.

Even biblically, the idea of counting abounds. In Miketz, my Bat Mitzvah parsha, Joseph interprets Pharaoh’s dreams featuring seven fat and skinny cows, and seven healthy and thin corn stalks. Judaism, in its structure, relies on numbers: The Torah consists of five books of Moses, and our biblical stories are divided into 54 parashiot, or portions, which a community recites weekly to mark our place in the yearly cycle of reading the Torah. Counting is a way to understand and sanctify time, a concept tied to our spiritual and ritualistic endeavors as Jews.

Another theme of the Omer is rooted in agricultural significance, which is a common concept in the chagim (holidays). From the ancient harvest festival of Sukkot, to the laws of Shmita, Jewish holidays and rituals are often tied to agrarian events. At the start of the Omer’s 49 day period, Jews during the Temple Periods would harvest barley, and bring a grain offering with a measure or sheaf called an “omer.” At the end of seven weeks that make up the Omer period, Jews would bring another grain offering, wheat. The counting of the Omer symbolized the cycle of the harvest system—from simple, younger grains like barley, to more sophisticated and desired grains like wheat. I see this relationship between the Omer and the harvest as a symbol for what a given period of time can do for the earth, as well as for ourselves. Just as the grains in our fields evolved, matured, and changed, so can we, and so we should. The holiday of Pesach focuses on the Jews as they begin to experience their freedom, as they come to know their place in the world not just as oppressed beings, but as those with agency. Then, 49 days later, we celebrate the giving of the Torah, and become people with guidance for our way of life. The Jewish people have evolved, and grown—something, that can only happen with the help of time.

The most spiritual and special part of learning about the Omer was learning about the individual Kabbalistic Sefirot which are attached to each of the seven weeks. Sefirot are described as “aspects of divine consciousness,” or ten embodiments of divine presence. Each individual Sefira describes a way or aspect of God. There are ten in total, divided into the three upper Sefirot, which are mostly unattainable to the human experience, and the lower seven, which are the foundational elements that can characterize a human experience. The lower seven are each correlated with a week of the Omer, giving this seven week period seven beautiful and meditative themes. They are as follows: Chesed, Gevurah, Tiferet, Netzach, Hod, Yesod, Malchut/Shechina. These Sefirot consist of many of the qualities we should strive to attain, as humans made in God’s image: kindness, strength, balance, energy, leadership, groundedness, and the ability to be present and divine.

Counting the Omer was particularly rewarding because I was able to connect each week with one of these themes. Once I understood the purpose and deeper meanings of the ritual, I was more driven to complete the counting of the Omer. As I move forward in my adult life, having recently graduated from college, I hope to maintain this practice of Sefirat HaOmer. Secular experts say it takes 21 days to make a habit, but I think it takes closer to 49 to spiritually ingrain one.

About the Author
Maya Rubin is a Miami native who recently graduated college with a degree in Anthropology and Social Entrepreneurship from Tulane University.
Related Topics
Related Posts
Comments