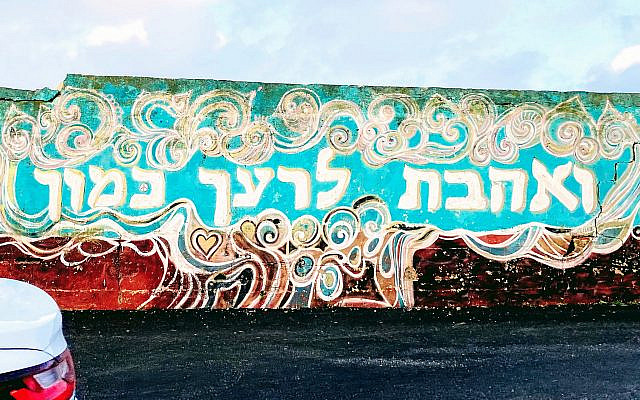 As Jews, we know the lesson well that when we fight each other, we only end up hurting ourselves.

This past week, I was  reminded of this when we were vacationing a little in Florida, and in the hotel room next to us, was a couple that was fighting their heads off and on Valentine’s Day on top of it yet. It was nighttime, and this man and woman were yelling their bloody heads off at each other. At one point, after a few hours of this insanity, we can hear the man say to the woman that he can’t yell anymore, because he’s going to lose his voice. Wow, it didn’t matter how bad they hurt each other with their words or that they kept everyone on the floor, and probably above and below them as well awake, but now the guy recognizes that he’s hurting himself as his vocal cords and throat finally gives out. I don’t know for sure, but I think a good psychologist wouldn’t exactly call that being self-aware.

Like the Torah portion this week, Terumah, we read about the laws of building the holy Sanctuary in the desert (Exodus 25:8):

They shall make for Me a sanctuary, and I will dwell among them.

To which we learn that G-d only dwells among the people when they work together and are at peace with each other. But when there is שנאת חנם (baseless hate), like in the times of the second Beit HaMikdash (holy Temple), then G-d removes Himself and His protection from us, and we as a nation suffer. It’s like my dear my mother-in-law, who used to half-jokingly tell her kids when they were acting up and crying:

Turn off the water works or I’ll really give you something to cry about.

When we act up and fight with each other, then in the end, we will really only end up hurting ourselves, and our parents and Hashem let us know this lesson. I wish that this past week at the hotel, the brawling couple next door would’ve known this as well and not kept us up all night and hurt each other and themselves.

Thomas Friedman, in his book, From Beirut to Jerusalem, tells a funny joke from the Israeli politician Yosef Burg about two Israelis having a philosophical discussion.

One says to the other, ‘Are you an optimist or a pessimist?’ and the other answers , “I’m an optimist, of course. I am certain that today will be better than tomorrow.’

Ah, that’s not a real optimist! But in truth, tomorrow can be better than today and yesterday, if we learn to live in peace and brotherhood with each other, and understand that hurting another is really only hurting ourselves in the end. G-d’s holiness dwells among us only when we stop the silly bickering and infighting, and love each other, and Him, with all our heart and soul. Finally, despite the sleepless night, I’d like to sincerely wish the couple that was fighting this week well, and hope that they too find peace and learn the power of love.