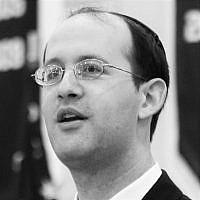 The Blogs
Yaakov Jaffe
Rabbi, Maimonides Kehillah; Dean, Maimonides School
Apply for a Blog
Advertisement
Please note that the posts on The Blogs are contributed by third parties. The opinions, facts and any media content in them are presented solely by the authors, and neither The Times of Israel nor its partners assume any responsibility for them. Please contact us in case of abuse. In case of abuse,
Report this post.

This Pesach, we will all recite the prayer for Dew, Tefilat Tal, in the privacy of our own homes, bereft of the drama of the prayer in synagogue.  Last year, the Chazan would be wrapped in a Talit and Kittel, the white shrouds, singing the halting melody of grand significance and great importance, with echoes of the High Holiday service.  Instead, this year, we will read the words to ourselves, likely in English, with the profound Hebrew poetry yielding some more clunky phrases in English translation.

Grant Dew to give favor to Your land

Give us blessing with Your joy

When you increase* much grain and wine

Establish the city that you desire with Dew (62:4)

In Hebrew, the six-stanza prayer for Dew features a reverse alphabetic acrostic, each with four rhyming lines.  Each verse also begins and ends with the Hebrew word for Dew, “Tal,” and is replete with allusions and quotations from other Biblical verses, the plurality of which come from Yeshayahu (noted here in parenthesis).

Command a good and crowned year

The fruit of the land should provide greatness and splendor (4:2)

Many of us naturally understand and intuit the importance of the parallel prayer for rain, recited each year over the holiday of Succot.  After all, the Land of Israel can only survive and thrive if abundant rain falls – and famine and thirst could befall the people without rain.  But why is Dew so important?  Yes, Dew does help cool plants and enables them to survive harsher and hotter conditions, but is it so important that it is specifically mentioned in the prayers each day, and that Dew is dramatically prayed-for each year on the first day of Pesach?

Drip Dew on a blessed land

Make us satiated with blessing from the delicacies of heaven

For the foundation-nation that is pulled after You, with Dew

Biblical Hebrew has many words for rain, and they appear numerous times in the Tanach: Geshem (35 times), Matar (38 times), Malkosh (8), Yoreh/Moreh (5), and at times Mayim from Shamayim.  But the word for Dew is rare (only 31 times), and it rarely features prominently in the stories of the Tanach.  It covered the manna in the desert (Shemot Ch. 16, Bamidbar Ch. 11), and was once used as a sign by Gideon (Judges Ch. 6), but it is generally an afterthought in the entirety of the Biblical texts, only one of which is referenced or quoted in the prayer for Dew (Devarim 33:13 from “the delicacies of heaven” from Dew).

Let Dew sweeten the fruit-juices of the mountains

Save those to whom You give-grace, from being shut-in (42:7)

The author of the prayer, Elazar Ha-Kalir, clearly had something else in mind as well, beyond precipitation and agriculture.  Though each verse of the prayer begins with a description of the agricultural implications of Dew, each verse turns in the middle and end with a prayer for the redemption of the Jewish people (a feature not found in Succot’s parallel prayer for rain).  The first and second verses asked to establish Jerusalem, and turn the lonely, remaining city into a crown in Your hand!  The third verse asked to take the nation that is foundational for this world, now shut-in and living through the darkness of exile, and give her the light of redemption!  Make our nation last forever – as long as G-d’s name lasts, renewing our name, and give us the favor of G-d.

Fill our storehouses Dew and satiation

Perhaps at this moment You will make our days new again

Yeshayahu 26:19 reads: “Your dead will live! The corpses of My (nation) will arise! Wake up and sing those that live in the dust! For Your Dew is a dew of light.”  Though originally this verse may have intended Dew as a metaphor of redemption (just as dew helps the plans revive, so to G-d will revive the dead at the moment of redemption), the author of the prayer for Dew, and numerous Midrashim (Shabbat 88b, Chagigah 12b, Maharsha Ketubot 111b, Pdr”E 32[end]), take the verse literally, that a special Dew of G-d has a supernatural power to revive the dead and usher in redemption.

There should be no scarcity in our fattened lands (10:16)

Please, give her favor with Dew

Passover is the holiday of redemption, and as such it is also the holiday about the relationship between G-d and the Jewish people.  And this prayer weaves in numerous, rich descriptions of that relationship.  We are the nation that is the foundation of the universe (from Tehilim 80:16).  We aspire to be G-d’s crown!  We are described as: pulled after Our Creator, as G-d’s chosen nation, as those given G-d’s favor or grace, and lastly the nation that has been led throughout this long, difficult exile through G-d’s tender kindness, like a shepherd leads his sheep (from Tehilim 78:52, led, or caused them to travel).  We are not just part of a faceless sea of humanity to Our Creator, we are instead His sheep, who are carefully led even through difficult times.

This year, we truly feel the sentiments of exile, darkness, or being shut-in as we recite the prayer for Dew.  We pray fervently and hope that by next year we achieve the blessings and hopes of this prayer with redemption, light, and song.

** the image of a small remnant being left after tragedy, like a lonely booth in a vast vineyard, is a recurring theme throughout Yeshayahu.

***The notion of us being equal with G-d’s own measure (lit. like your value) is a radical one, and this same word was removed from the High Holiday Prayers and replaced then with “like your holiness.”