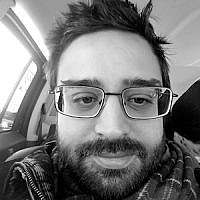 The Blogs
Alejandro Moreiras
Apply for a Blog
Please note that the posts on The Blogs are contributed by third parties. The opinions, facts and any media content in them are presented solely by the authors, and neither The Times of Israel nor its partners assume any responsibility for them. Please contact us in case of abuse. In case of abuse,
Report this post.

In the United States, rightwing and leftwing politics are no longer ideological. Few voters are self-identifying Keynesians or Galbraithists anymore or believe like Milton Friedman believed. Political climates in America are different now than they were in previous generations. Right and left are no longer defined by core principles but by something else. This was not always so.

In the 1930s and 1940s, economics and social struggle were cause and solution to the world’s problems. To think, especially for the prep-school bourgeois, was to get involved with the course of history. To debate economics was more than discussing the economy, it was to take part in the elucidation of one’s relationship with mankind, or God, the worker, or revolution. In those years the stances one took defined the kind of person one was. Ideas were worth dying for, some of them some people killed for. Personal disagreements during political discussions manifested on the world stage: coworkers were summoned to the Soviet Union to never return; union teamsters gave a beating to overly active left-wingers on payroll. The world was on the precipice of another war. Stakes were high and to be an intellectual was, even from an armchair, to participate in the world’s affairs.

In the Pax Americana that followed World War II, the ruins of peacetime offered new opportunities upon which to build and make money. During these boom years, from 1945-1965, intellectuals were needed on multiple fronts: to (further) discredit the communist heresy, to articulate a political philosophy beyond the New Deal, and to bring tradition back to modern discourse.

During this period, Americans had faith in the sweeping capabilities of their government. At home and abroad, Americans looked to government to fix what ailed them. President Kennedy, author of “ask not what your country can do for you,” and darling of liberals, was significantly more conservative on this point than his successor would be. It was President Johnson’s Great Society that greatly expanded not only the reach of federal government but a totaling sense of its responsibility.

As the United States government was growing (in size and in debt, foreign entanglement, and in societal caretaking), a rightwing opposition began to mature. Barry Goldwater’s 1964 run for the presidency (during which Milton Friedman was economic advisor) was based on a movement that sought to think outside the parameters of big government liberalism. For conservative Americans this became a twilight period where the true counterculture took place underneath pales of tobacco smoke and in the hallways of Notre Dame and the University of Chicago, in the pages of National Review and Triumph, Commentary and the Wanderer, and on select airwaves.

Small government conservatives went from being a few voices in the wilderness to the new fathers of the nation. Things were so good for conservative America that company men could, and did, believe in the righteousness of their cause. It seemed verifiable that cutting taxes led to economic growth strong enough to afford the working and middle classes decent lives. The postwar economy, fueled by the diverse needs of cold war military armament, rewarded states that reduced social welfare initiatives and favored low-tax, business-friendly climates. Strom Thurmond went from state’s rights to rights-to-work and positioned South Carolina as host to major international corporations. Jesse Helms, the infamous agitator against school lunch programs, oversaw the development of Research Triangle Park in North Carolina. The South, along with Texas and vast swaths of the southwest up to and including Orange County, California, for better and worse, became engines of the national economy that burned faster than those forged in the labor-friendly Great Lakes. Conservatives, many of whom began their thinking lives as enthusiastic leftists, and most of whom had been lifelong Democrats, beginning in the 1960s and increasingly in the 1970s and 1980s voted Republican. President Reagan’s defeat of Jimmy Carter was a culmination of new right politics in America. His administration represented a forward-looking, ecumenical conservative movement of neoconservative Catholics and Jews, and politically energized evangelicals (and others). They had won over to their cause, not only an electoral majority but the worldview of most Americans.

By the 1980s, the American left had largely accepted the tenants of a big business, market-driven, globalized economy and crafted, in place of economic policies, identity-based social agendas. In effect, the left was a shell of what it had been, and it had abandoned class struggle. By the early 1990s, the Soviet Union was a relic. Because leftwing ideology had been teleological, some scholars saw the demise of the left as an end of history. Political thought in the United States had plateaued with the progressive or compassionate conservativism that had been created in the 1960s to go on the offensive against international communism and domestic, big government liberalism.

Despite being forged on opposite ends of the political spectrum during the mid-twentieth century, American conservatives—like their leftist counterparts—believed in the power of thought. There were genuine intellectuals—journalists, economists, politicians, professors—who believed that correct national policies, enacted for moral reasons with a lucid sense of history and clear directional purpose, were the bedrock of America’s success.

For a time, the country seemed to be, overall (especially to prep-school bourgeois types), a prosperous and morally centered place where what was not provided for in kind was offered up as opportunity. It was a place of freedom and virtue, encouraging self-reliance but not too proud to provide for those who could not for themselves.

Since 2008, the year it became clear that contemporary politics are beholden to the at once powerful and illusory marketplace, it has become harder to buy into the old myths. Despite the urgent notifications on our phones before morning coffee, things move slower now than ever before. The socialist revolution that seemed imminent less than one hundred years ago, not just to communists but leftists the world over, is inconceivable now.

For all the anxiety Donald Trump is associated with, as either cure or cause, doomsday is still far off. There is no American Gestapo or KGB. There isn’t even a McCarthy to scapegoat. Big Tech has compiled more personal information on private persons than the Spanish Inquisition ever could, and yet there are no martyr’s pyres in downtown plazas, not even effigial ones. The data is not used to convert people, it is used to sell to people.

And, the economy is doing well.

Could it be that since at least the time of the Great Depression America’s presidents sold themselves as and to believers? First on the side of big government and social activism (from FDR to Carter—yes, including Nixon), and then on the side of free markets, technology and capitalism (from Reagan to Obama—yes, Obama governed as a Reaganite). But now, we have something new. For the first time in close to a century, we have a president without a grand narrative for the future of this nation. We have a president who is not a believer.

This could be a symptom of a larger issue: Americans are adrift. The Republican party in power just approved a massive spending bill and its Democratic predecessor failed to realize universal healthcare. The party in favor of the death penalty is the party against abortion and the party of diversity is the party willing to shut down their own government for non-citizens, only to abandon those same dreamers in the face of negative polling.

There is no working ideology in the now adult twenty-first century. Is this a good thing? What does it mean? What are idealists to do? Where are intellectuals to go? Are there still ideas worth fighting for? Were there ever?

At least one way out of this impasse is to concentrate on what is most important, most urgent, and most dire.

About the Author
Alejandro Moreiras is a Ph.D. graduate student in Religious Studies at the University of North Carolina at Chapel Hill. He holds an M.A. from the Hebrew University of Jerusalem and a B.A. from Hampshire College with a Five College Certificate in Middle Eastern Studies.
Related Topics
Related Posts
Comments
Advertisement