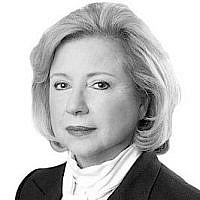 The Blogs
Colette Avital
Apply for a Blog
Please note that the posts on The Blogs are contributed by third parties. The opinions, facts and any media content in them are presented solely by the authors, and neither The Times of Israel nor its partners assume any responsibility for them. Please contact us in case of abuse. In case of abuse,
Report this post.

Last week, the important German newspaper Der Spiegel — not usually known for a pro-Israeli stand — published an article attacking the local social court in North Rhine Westphalia for a case being debated against a German Judge, Jan-Robert von Renesse.

Our readers may ask why this matter should interest us. Very simply put, Judge von Renesse may have to pay a very heavy price for his outstanding help to Holocaust survivors in Israel and elsewhere. He will stand on trial for disciplinary charges brought against him by his former colleagues, the judges in the Social Court of Essen.

Here is the story:

In 2002, the German Parliament passed the Ghetto Pensions Law (ZRBG) according to which Holocaust survivors were also eligible for a pension for the hard labor they had performed in ghettos and camps during World War II. Half of these survivors lived in Israel.

By the time Judge von Renesse joined the Court, around 90 percent of their applications had been rejected. The good judge looked into the matter and realized the judges’ rejections relied on superficial reference works and the lack of real historical evidence as a basis for their decisions. He proceeded to commission historians, who gathered new evidence, and then, in cooperation with the Israeli legal authorities, he set up court in Tel-Aviv. He met with numerous survivors, listened to them, helped them fill out the complicated forms — and as a result, all claimants got their pensions.

In June 2009, the Federal Social court vindicated Judge von Renesse’s work and interpretation, and it allowed a new reading of the law. Judge von Renesses’s colleagues felt offended and pressed charges against him, claiming that he had openly slandered the German legal system. If found guilty of these charges, the judge may lose his license and not be allowed to work anymore.

In Israel, criticism of judges and of verdicts is common place. No one gets punished for that. Criticism for us is part of our freedom of speech.

It seems that this is not so under the strict laws of discipline and order in today’s Germany. This is the first time that a judge has been tried in Germany since WWII. Holocaust survivors in Israel, and indeed the world over, feel a deep debt of gratitude to the judge. We feel outraged at the thought that this man who saw to it that justice is made to the victims on Nazi cruelty, should be punished for his courageous deeds.

Could it be that in to-day’s Germany, “ordnung uber alles” (order above all) still prevails?