Tel Aviv Pride Parade, this impressive showcase of bountiful breasts and classy sunglasses, took place on Friday 9th of July, for the 19th time in row. Getting changed over the years,  the Parade has kept its spirit of freedom, its affirmation of everyone’s right of being different, its readiness to accept “the other.” 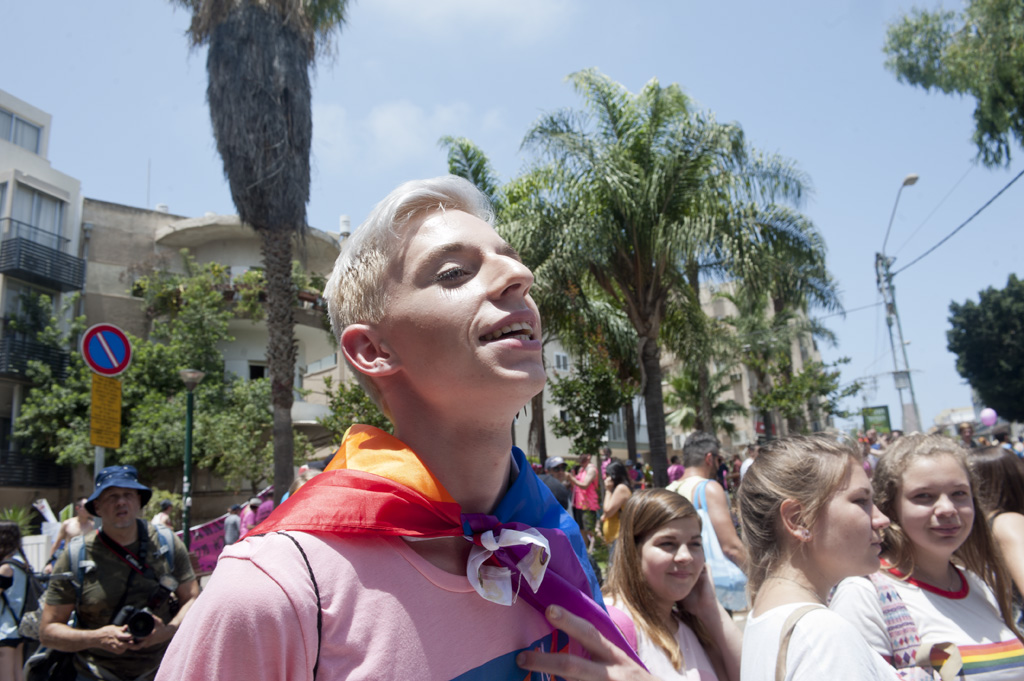 Love Parades of the early 2000’s entered the collective conscious with a bang, piercing it like a hollow-charge projectile, shattering the homogeneity and uniformity of the local society – or at least this was how I perceived it on those days, after ten or so years in this country. They were openly provocative, often bordering – or crossing – the limits of good taste, with huge platforms flowing above the crowd, beautiful men and women performing blatantly sensual dances on them. Add the deafening music and the picture will be complete. Some praised it while others were disgusted. But since then, things forever will be different. 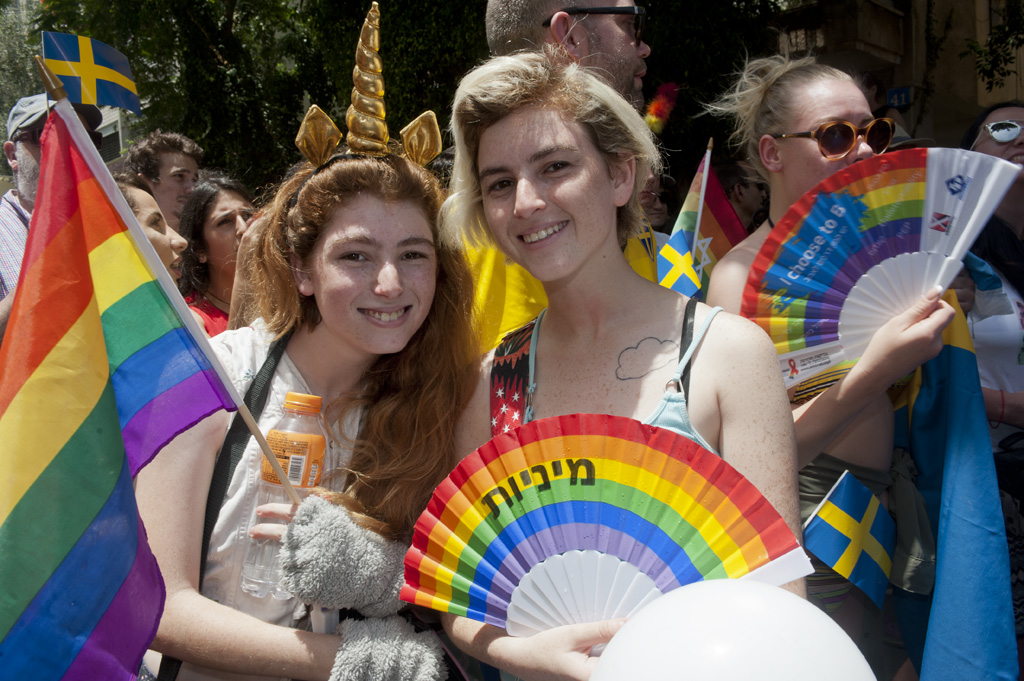 I remember how back in 2002, together with my shy young wife, I first viewed the Parade. At that period we, after years of marriage, were still fighting for her legal status, going through many humiliations in the offices of the Ministry of Interior. She was not one of “unzereh menschen” and as such not really wanted. Standing at the sidewalk, she turned to me and said: “This is probably for the first time that I feel that I am like anybody else here.” 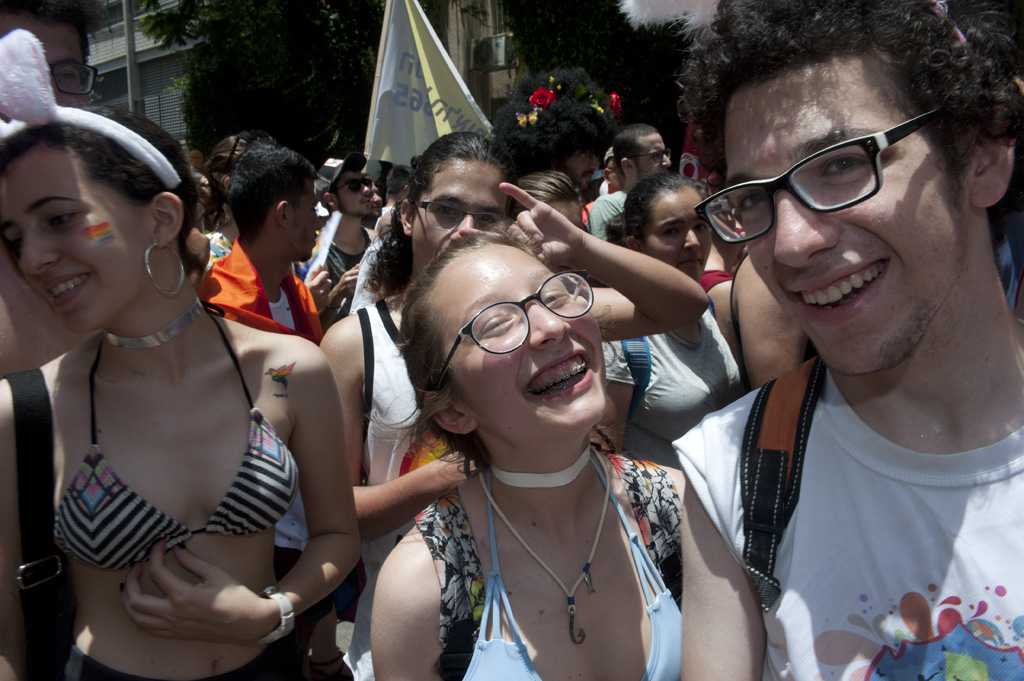 “I have no problem with the kids of my age attending the event,” said my daughter, a good Russian Israeli girl and a classical ballet student. “The latent LGBTQ will understand what their inclinations really are, while born straits will realize once more that the other is not much different from you.” She most probably perceived these ideas when enjoying our first Parade back in 2002, still in her mother’s womb.

Since then, much water has flowed under the bridge over Yarkon, the National river of the State of Tel Aviv. Achievements of the local LGBTQ community are immense, although its members claim that there still is a lot to improve. Veterans of the movement grew older, many of them got married and adopted kids; busy family people, they only rarely attend the Parade, leaving to the young to continue the struggle. 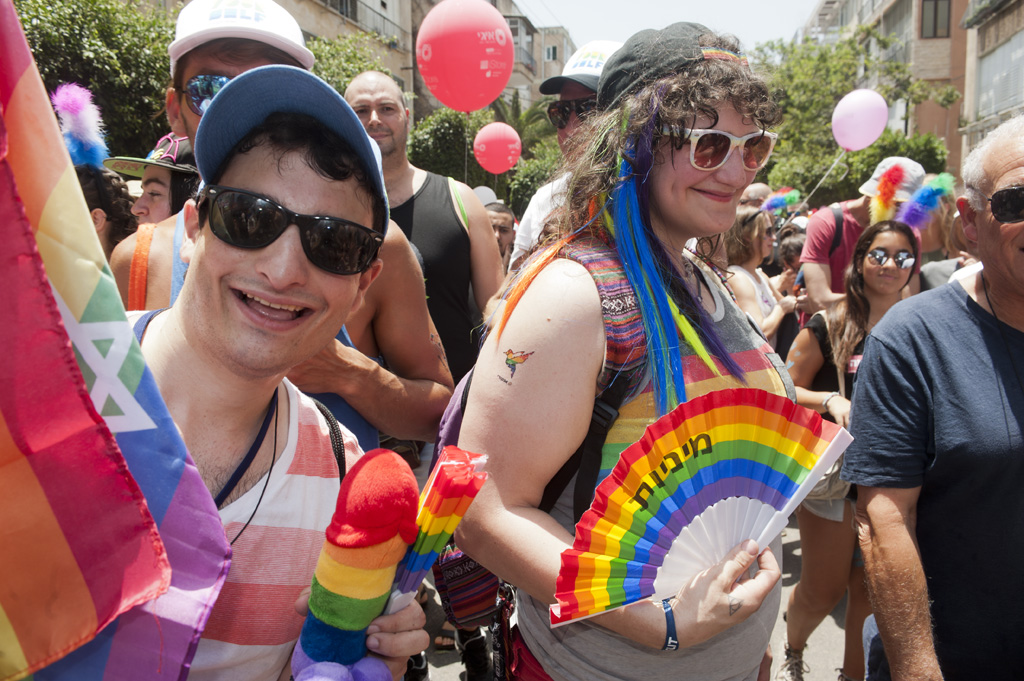 The Parade has changed, in many ways. It is not so noisy, to begin with, and although on this day some 200.000 take to the streets of Tel Aviv, at least half of them are straights. And a huge part of the latter are teenagers, who, I figure, still have rather vague ideas of what till lately was regarded conventional sex. The youngest among them (I don’t count those brought by to the march by their parents in baby strollers) was 15 years of age, according to her words. 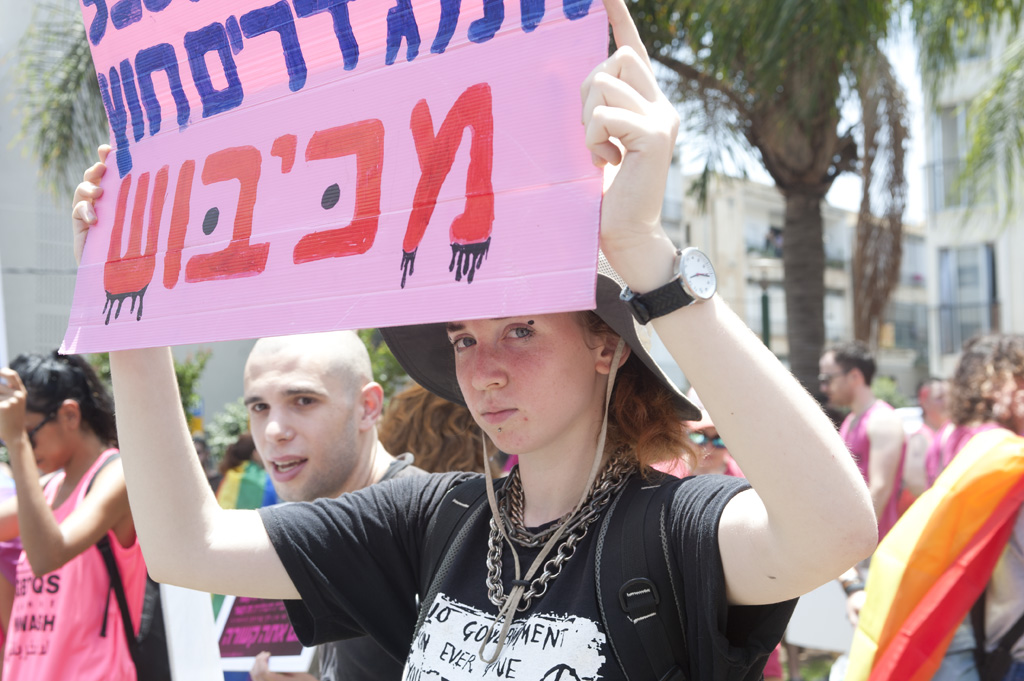 One particular photo from from the 2002 Parade went international: a colorful group of men and women marching with anti-occupational and anti-racist posters in their hands. But while then it was just a small group of demonstrators, this year they were many. Rights for minorities, more rights for gays/lesbians, and not only. 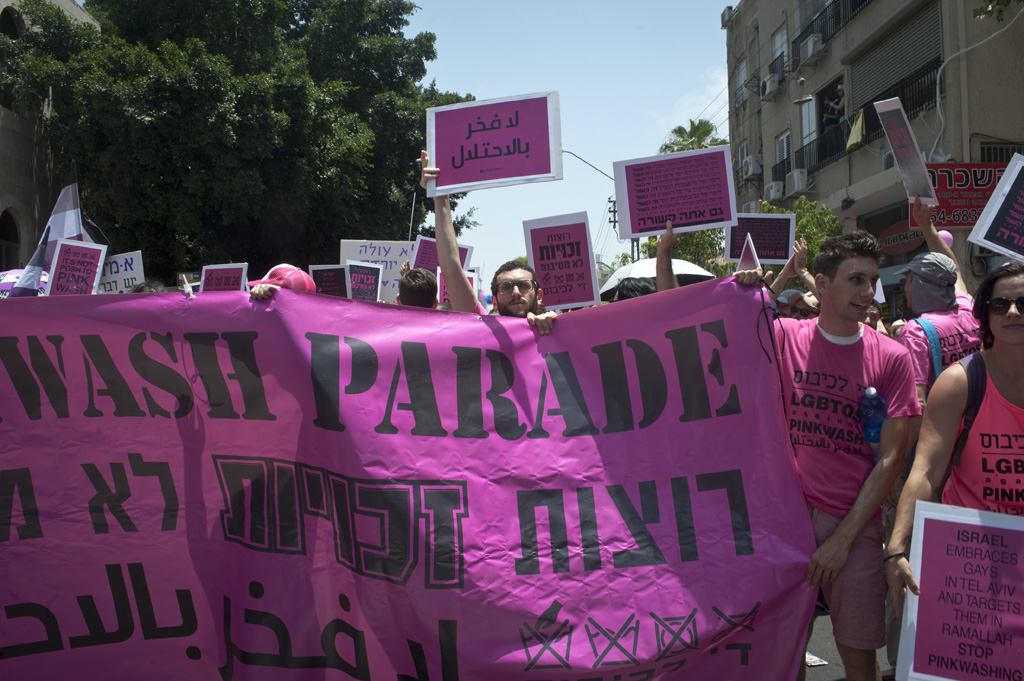 There was also a group which lambasted the entire event, seeing it as a Pinkwashing. They claim that Israel supports LGBTQ rights only to to divert attention from the Palestinians’ human rights violations.  I find hard to agree with it and asked an Australian tourist  – one of approximately 30.000 guests who attend the pride festivities in Israel – for an opinion. “Sorry, I have not,” he smiled nicely. “I am just a foreigner. And we are having a great time, traveling all over your beautiful country.” 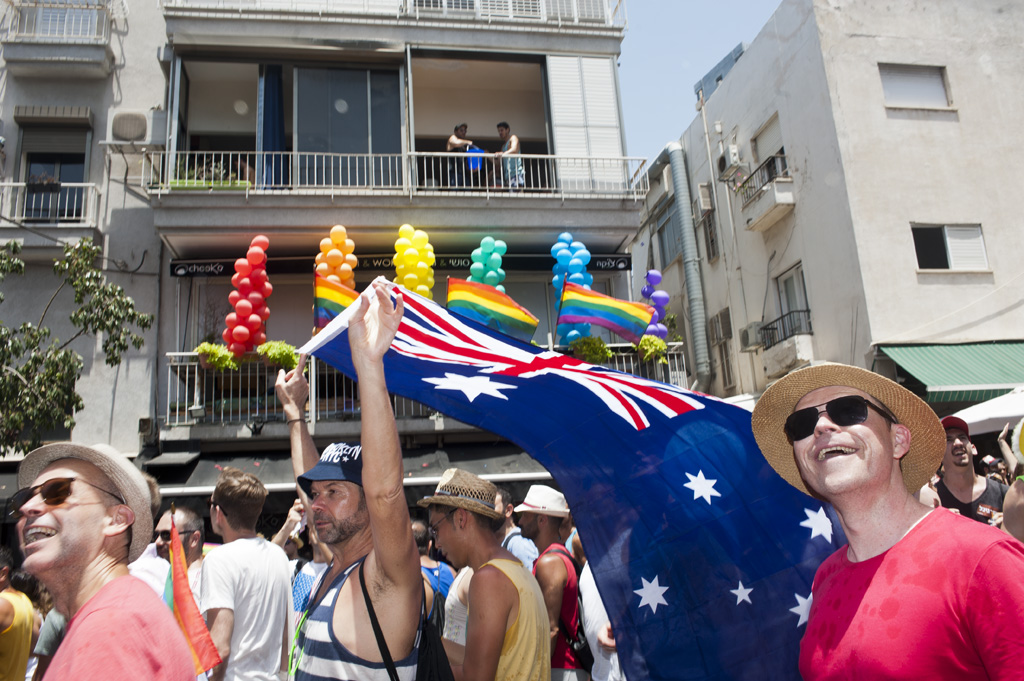 Our Australian guests have no slightest idea about Pinkwashing.

These groups of protesters were noticeable yet not plenty. After all, the Tel Aviv Pride Parade is a merry carnival, a feast of one and all, a celebration of freedom, maybe even more honest than that of Passover with its motto “They tried to kill us, we survived. Let’s eat!” It’s quite problematic to celebrate your personal liberation from physical and spiritual slavery and at the same time keep under your rule an entire people. And even more than that – to lock it hermetically for a few days because they can spoil our feast (and they really can). 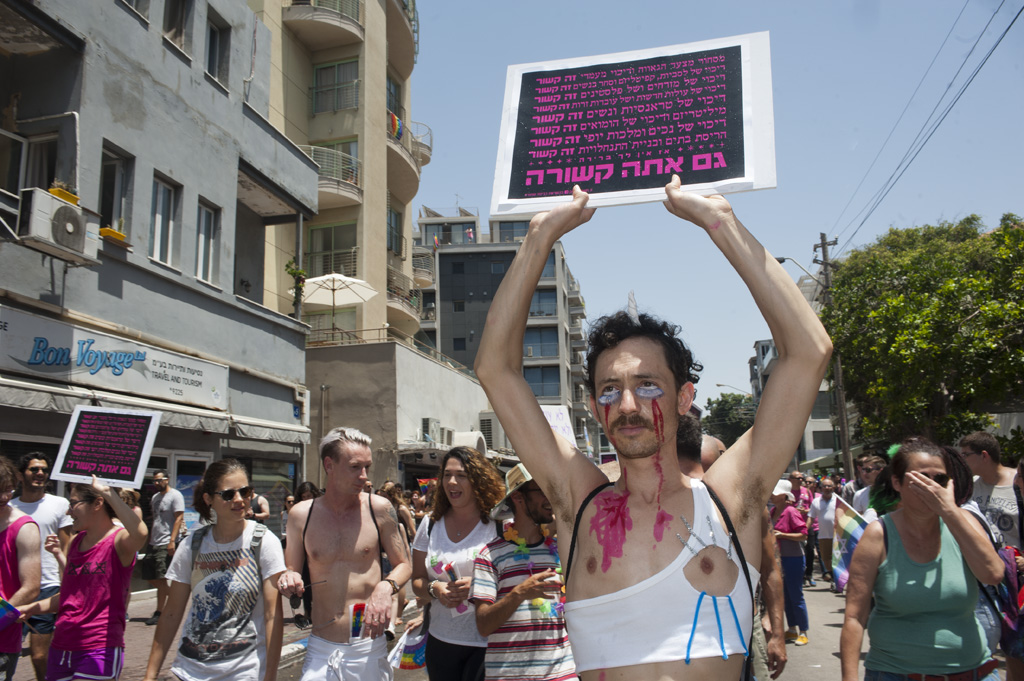 Equal rights for one and all 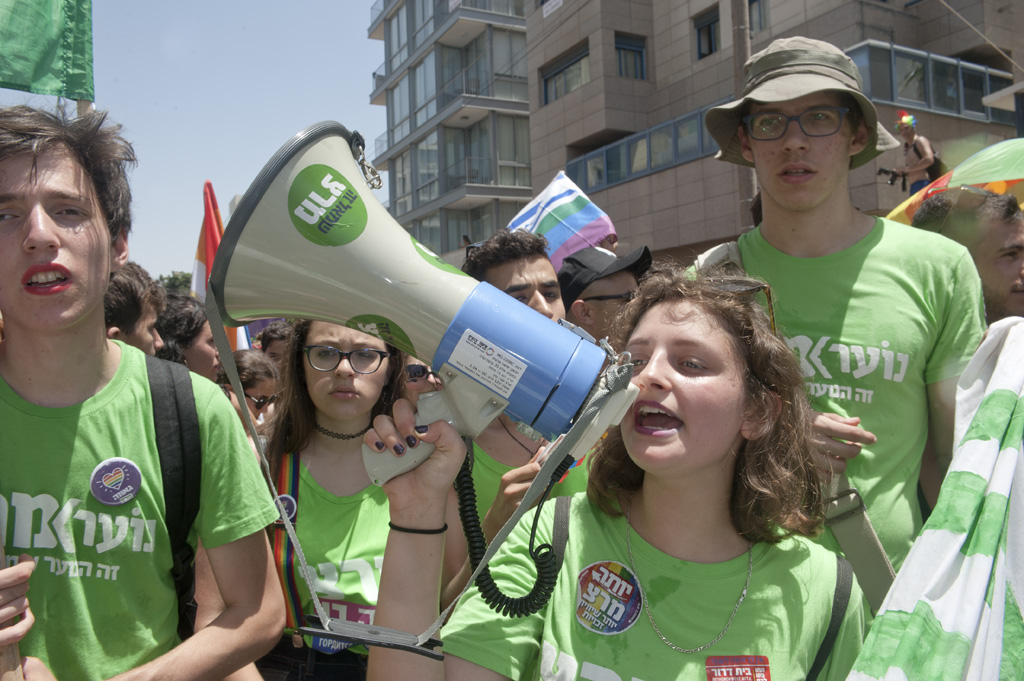 You can’t stop being MERETZ

But back to the carnival. It was fun. People danced and sang, they took selfies, they loved themselves and – almost with the same passion – they loved their neighbor. 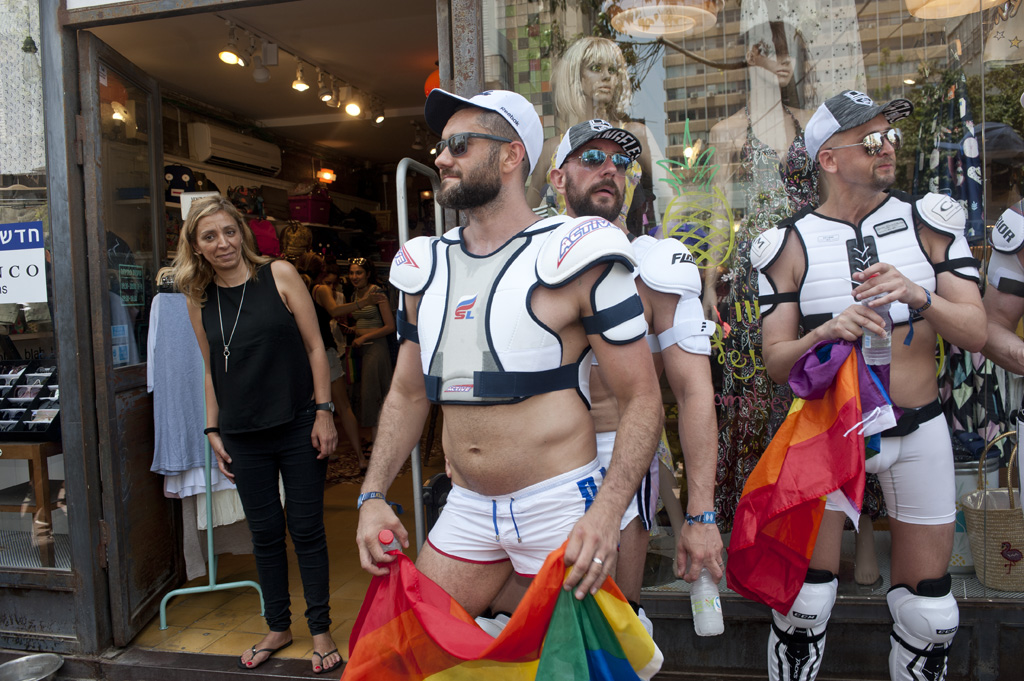 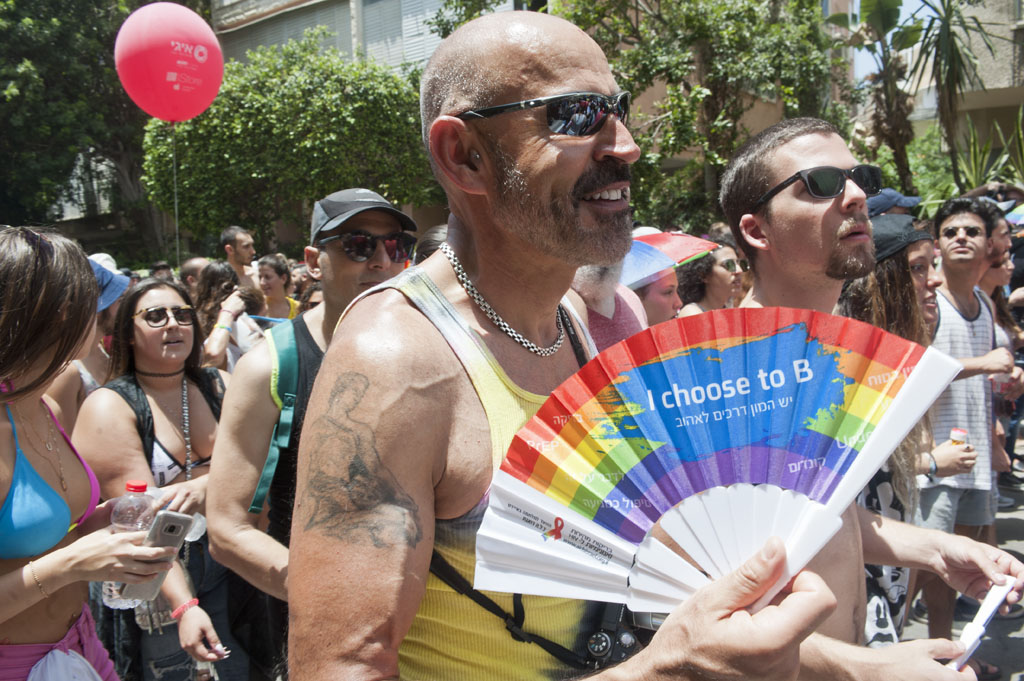 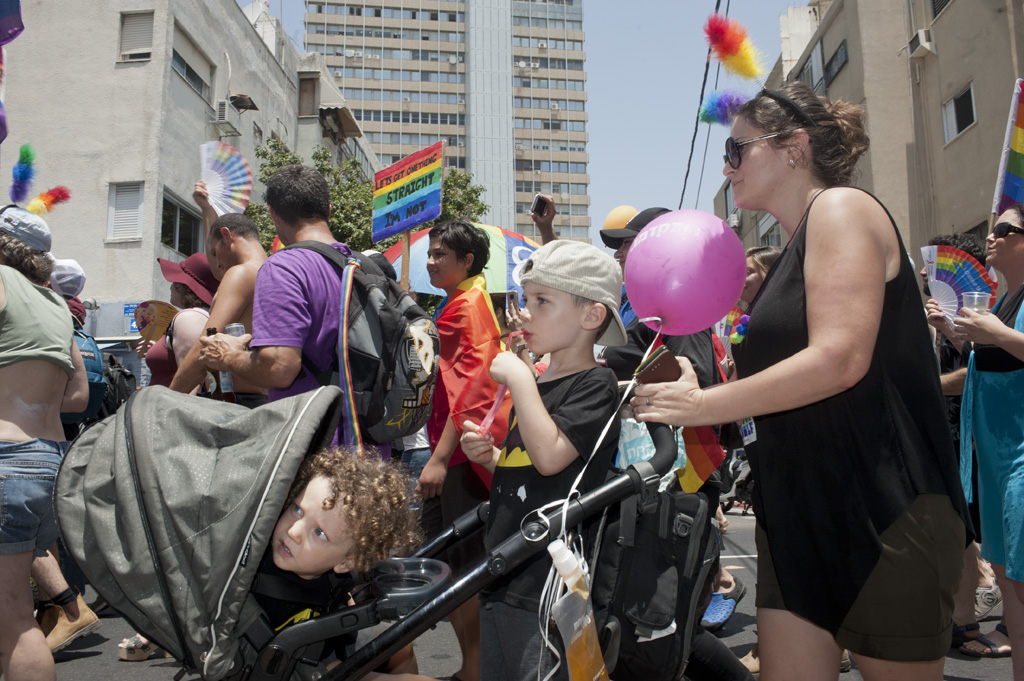 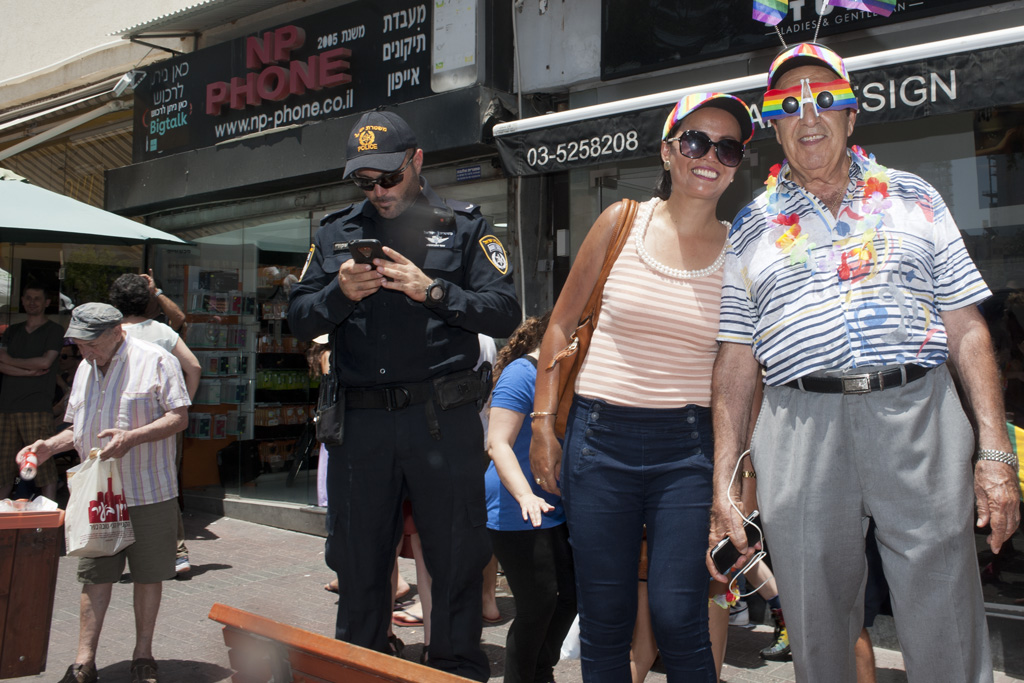 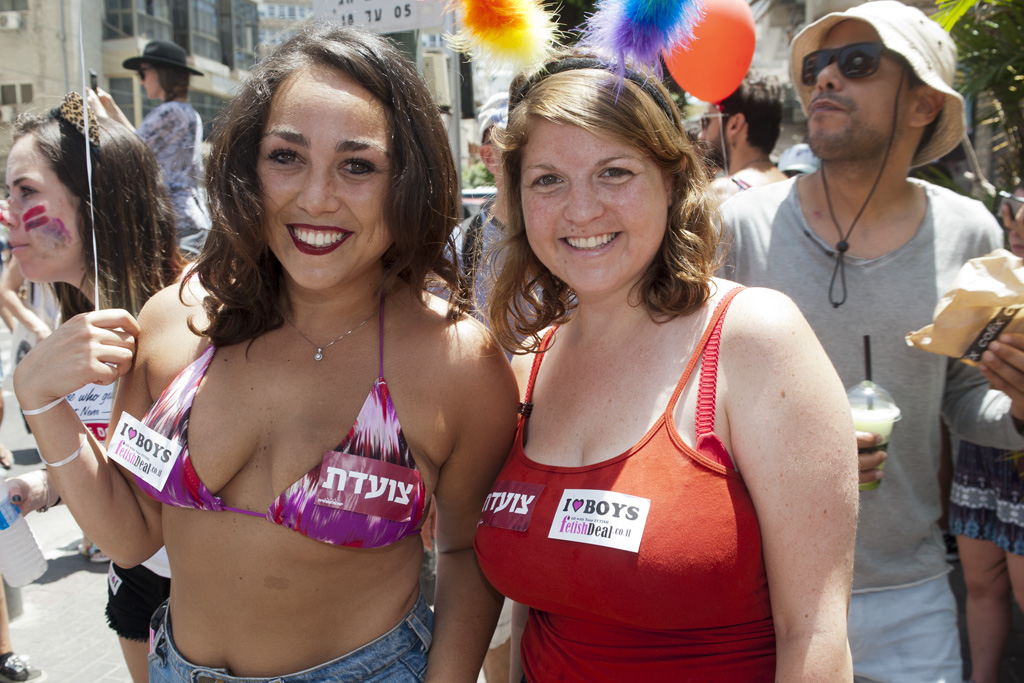 “We …L O V E…  boys, but we have come out of solidarity with those who love differently.”

Of course, there was somebody, who was appalled by the mass sacrilege and quite heroically (one righteous man against 200.000 sinners) tried to rescue at least one soul. He called himself an Evangelical Priest “and maybe a Jew but I don’t know.”

Sweating abundantly, he called desperately the revelers to stop using their bodies in a non-reproductive way. “You don’t leave posterity and look how many kids Arabs have! But Jesus loves you as you are, because he knows for sure that quite soon you would be burning in hell forever!” 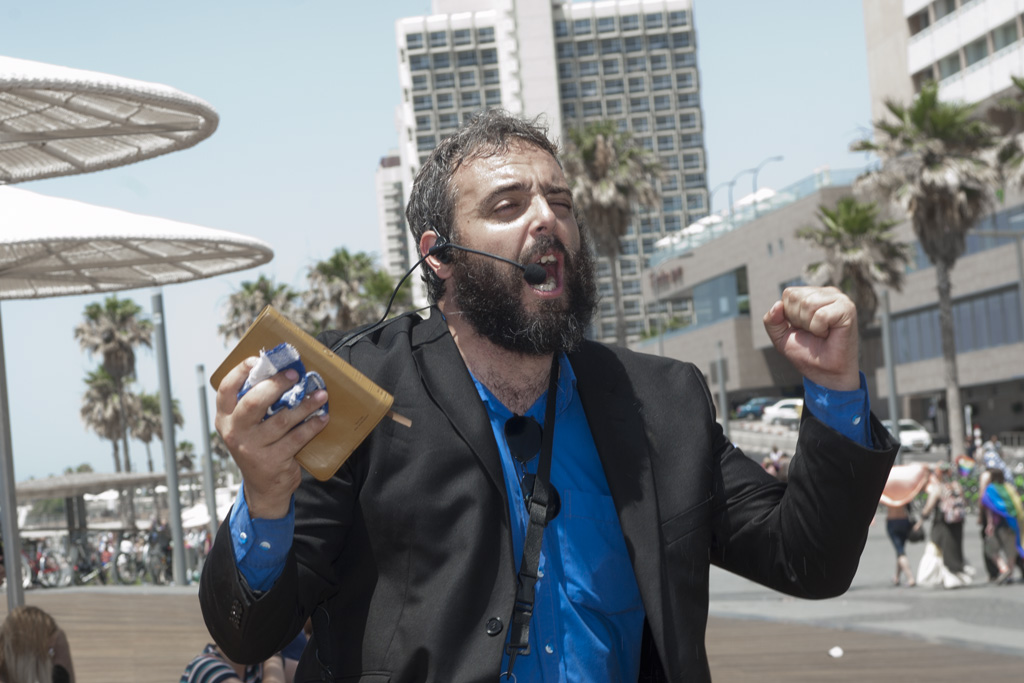 A not so young Israeli man came up to him and said friendly: “I have found my God. He is always inside of me. His name is Conscious. His another name is Responsibility. Judging from what you say, you are still searching for yours. When you find him, please come and we shall talk about many things.”

What can I say?