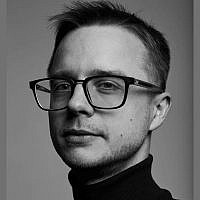 The Blogs
Olexiy Minakov
Apply for a Blog
Advertisement
Please note that the posts on The Blogs are contributed by third parties. The opinions, facts and any media content in them are presented solely by the authors, and neither The Times of Israel nor its partners assume any responsibility for them. Please contact us in case of abuse. In case of abuse,
Report this post. 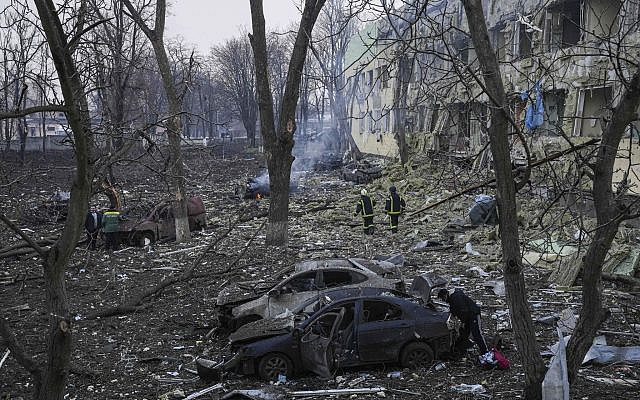 Ukrainian emergency employees work at the side of the damaged by shelling maternity hospital in Mariupol, Ukraine, March 9, 2022. (AP Photo/ Evgeniy Maloletka)

I have not been able to contact my parents, who are under siege in Mariupol for three weeks now. The city lacks mobile communications, the Internet, and electricity because of Russian shelling. I don’t know if my parents are alive. The only thing I know is that more than 2,300 civilians in Mariupol have already been killed by Russian soldiers.

My great-grandfather, who died in the first days of the Nazi attack on the USSR, apparently turned over in his grave when Russian troops with a swastika “Z” fired on maternity hospitals, theaters, and high-rise buildings.

The worst thing is that this catastrophe can easily go beyond Ukraine. In the event of victory over Ukraine or in the event of a “freeze” of the war with Ukraine, the next victims of Russia will be other neutral countries outside of NATO.

Russia is a constant threat to the democratic world. With or without Putin

The day before the Russian military invasion of Ukraine, my friend and I trained in a gym in the center of Kyiv. In those days, Ukrainians were actively discussing “to be or not to be” a full-scale Russian attack, as the US, British, and other officials were warning.

My friend asked me, “How do you imagine that rockets will fly, here, past the buildings? Are you serious?”

The next day, the same friend woke me up with a phone call at 5 a.m. with the words “It’s started.”

Since then, the world has witnessed Europe’s largest war since World War II. Some politicians say that it is Putin’s war; he is responsible for it alone.

However, in reality, it is not just a matter of the dictator’s personality. It is the essence of the Russian state, the imperial ideology of the “Russian world,” censorship and monopoly of state propaganda, the lack of fair and democratic elections, the invariability of power, repression, and persecution.

Russia has never been able to coexist peacefully with other countries.

Expansion and aggression are natural states for the Russian Empire, the USSR, and its successor, the Russian Federation. It has always been a destructive country that did not respect the rights of other people.

Overcoming the devastation and famine after the First World War, the Stalinist regime signed the Molotov-Ribbentrop Pact with Nazi Germany about a new division of the world. The USSR occupied parts of Poland, Latvia, Lithuania, Estonia, and started a war against Finland.

After the collapse of the USSR, the West tried to “restart” relations with Russia. However, these attempts failed because of the militant nature of Russia, which has not disappeared. Russia continued its policy of ongoing war.

First on its territory — the First Chechen War, and then the Second Chechen War. Then, in 2008, Russia launched a war against Georgia.

Sensing impunity in Georgia, Russia tried to annex Crimea in 2014 and started a war in Donbas. After that, Russia launched an invasion of Syria.

Any attempt by the West to establish civilized relations was perceived by Russia as a weakness because it respects only strength.

The culmination of these relations was the absurd decision to return the Russian delegation to the Parliamentary Assembly of the Council of Europe in 2019.  Russia was deprived of the right to vote in these organizations, due to the occupation of Crimea and Donbas, but that did not induce Russia to liberate those territories.

In addition, acts of Russian banditry and violations of international law did not stop Nord Stream 2, which undermined Europe’s energy security — the project was almost complete.

The policy of appeasing the aggressor led to Russia starting its next war in 2022.

The war in Ukraine could lead to the disintegration of Russia.

From Kamchatka to western Russia, almost to Moscow (Chuvashia, Mordovia, Tatarstan), and other regions are the territory of small nationalities, in which the Kremlin has taken away their respective identities. The Kremlin forbids them to teach children in their native language, trying to get rid of their culture and customs to create a “great Russian people.”

Of course, it is too early to talk about a “parade of sovereignties,” by analogy with the declaration of independence before the collapse of the Soviet Union. But we are already watching the parade of businesses leaving Russia. There are hundreds of companies shutting down in Russia.

Russia is the most sanctioned country in the world. In the current context of globalization, this means becoming a fourth-world country, like North Korea, Somalia, and Zimbabwe. Rapid inflation, the devaluation of the ruble, the shortage of goods, unemployment — all this is already being observed in Russia. And the economic crisis will only worsen.

Should we be afraid of Russian collapse? In the early 1990s, American elites feared that the Soviet Union would collapse peacefully. That is why, on July 30, 1991, during informal talks, George H. W. Bush told Mikhail Gorbachev that it was not in America’s interest for the Soviet Union to disintegrate. And on August 1, 1991, the president of the United States publicly called on Ukraine not to leave the Soviet Union in his famous “Chicken Kyiv” speech.

However, as the further course of events showed, the unrest of the American establishment was in vain. Ukraine, Kazakhstan, and Belarus have voluntarily renounced their nuclear arsenal. The West established friendly relations with the newly formed countries. Only Russia remained hostile because it is a fragment of the empire that did not fall apart.

Accordingly, the West will also be able to establish peaceful relations with the new countries that will emerge after the collapse of Russia.

Worse than the collapse of Russia — the continuation of an inadequate, aggressive, cannibalistic state.

Can you imagine that, in the 21st century in Europe, people drank water from puddles and fountains? That the corpses of people lay on the streets for weeks? All these things are happening right now in my hometown of Mariupol, which is surrounded by Russian occupation forces.

Moldova, Georgia, Armenia are smaller in area and population than Ukraine, and have a much weaker military potential. It will be easier for Russia to capture them and win a “small victorious war.”

Even the Baltic states of NATO (Latvia, Lithuania, Estonia) are also under threat. Because Russia may not openly attack them, but conduct a hybrid special operation with “green men” without identification, as was during the attempt to annex Crimea.

There is no certainty that this will justify the application of Article 5 of the North Atlantic Treaty (an attack on any of the Allies is an attack on all others). For example, some “pacifist” NATO members may believe that sending troops to defend the Baltic states will be seen by Russia as a provocation that will only exacerbate the situation and therefore insist on a diplomatic solution. In general, Article 5 has been applied only once in the history of NATO, following the events of September 11, 2001.

In addition, Putin is threatening strategic nuclear weapons. And we may soon be approaching a situation reminiscent of the Cuban missile crisis of 1962, when humanity was one step away from a nuclear apocalypse.

It is no secret that Putin must be stopped. But not everyone understands that the fall of Putin’s regime will only be able to temporarily halt Russia’s active aggression.

Demilitarization will be needed to avoid future Russian wars. This mission is to be carried out by a military tribunal with the further purification of Russian society, culture, education, and politics from the imperial ideology of the “Russian world.” Russia has to go all the way that Germany has gone since World War II.

And even in this case, there is a possibility that after Russia gets back on its feet thanks to some analog of the “Marshall Plan,” it would start threatening the world again. Therefore, the disintegration of Russia may be the best option for human security.