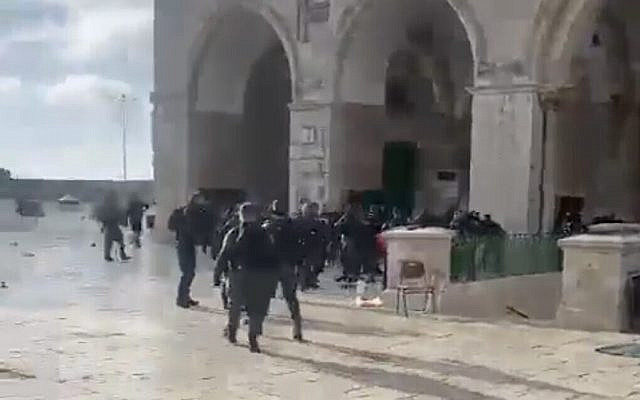 Police are seen during clashes with Palestinians on the Temple Mount, May 5, 2022. (Screen capture: Twitter)

Once upon a time, there was a WhatsApp group. The participants were discussing particular political figures in blunt, unsparing terms, descending to name-calling. One member of the group ventured to suggest, “Hey all, let’s cool down. The Temple was destroyed because of baseless hatred.” A few people who had used particularly toxic language quickly responded, “Absolutely, baseless hatred is off-limits. But this hatred isn’t baseless. It’s merited!”

This story taught me that it is not helpful to point out that a given social situation we find ourselves in might represent baseless hatred. Worse, at times such an identification becomes part of the problem, implying that there are certain types of hatred we should avoid, but that other types of hatred are perfectly acceptable. Let us say unequivocally: the problem is that we hate, we reject, we un-person the people that we need to build a society and a state with. Let us recall that when the Torah states: “Do not hate your brother in your heart,” it does not limit the scope of the command just to baseless hatred.

Neither baseless hatred nor unconditional love

Overusing the term “baseless hatred” can lead us to another harmful distortion. When do we tend to characterize speech or behavior as baseless hatred? It’s not when we ourselves are the ones who hate; on the contrary, then we always see a justifiable reason for our feelings and deny that our hatred could be baseless. No, hatred seems baseless only when we ourselves are the objects of it. By calling it out as baseless hatred, we shift the focus to the other person and reinforce our perspective that there is something wrong in them. We miss the opportunity to confront the possibility that we might bear some responsibility for the hatred or that we contributed in some way to the atmosphere that fostered it.

Rabbi Abraham Isaac Kook famously stated that the solution to baseless hatred is unconditional love. While this dictum surely is true, Rav Yehuda Amital introduced a note of caution against quoting or applying it too freely. When I grant another person unconditional love, I may unconsciously be thinking, “You don’t deserve love — but I’m willing to love you nevertheless.” Unfortunately, since love can prove difficult to kindle and sustain, we may be left with only the first part of the sentence, that the other person is unworthy of love. Or we take our unconditional love as a sign of our own exalted character: “Look how refined my sensibilities are — I’m trying to love you even though you don’t merit my love.”

A dispute for the sake of Heaven will endure

Rav Amital also suggested an intriguing reading of the sages’ statement, “Any dispute that is for the sake of Heaven will in the end endure,” to address the dissension and division that plague the Jewish people. What, he asks, is a dispute that is for the sake of Heaven? It can be contrasted to a purely human dispute, which concerns personal opinions and which is therefore given to being solved through flexibility and compromise. But when each side in a dispute believes that they are contending purely for the sake of Heaven, and that holiness — rather than ego — is driving them, peaceful accommodation becomes impossible. Ultimately, such a dispute will endure, in the sense that it can never be resolved. This is clearly a creative reading of the text, as Maimonides explains that “for the sake of Heaven” means, “for the sake of seeking truth.” It means we open our minds, attempt to honestly listen, and pursue truth. But we can integrate the traditional understanding of “for the sake of Heaven” with Rav Amital’s interpretation: when each of us is certain that we are the only ones who are expressing divine truth, genuine listening, and the pursuit of truth can easily fall by the wayside.

In Israel’s environment of tribal discourse, a person who sees the other in all their complexity, who recognizes nuance and rejects a simple division into good and bad, runs the risk of being labeled naïve. Members of his own “tribe” are likely to call on him to leave his delusions about the other behind and to see reality without rose-colored glasses. This dismissive attitude often suffices to discourage people from voicing unpopular views.

There is a name for this problem, and a solution for it as well. Rabbi Jonathan Sacks calls it pathological dualism. In his book, Not in God’s Name: Confronting Religious Violence, he addresses a puzzling phenomenon: how can people inflict violence and cruelty upon others and claim they are acting in God’s name? Rabbi Sacks explains that those in the thrall of pathological dualism divide the world into absolute categories of good and bad, light and dark, paving the way for brutality. Within the Jewish people the situation rarely descends to physical violence, but verbal and emotional violence are commonplace. When reality is compressed into a one-dimensional caricature of itself and partitioned neatly into good and bad, the “bad” group, by definition, can never do good. Any friendly statement they make will be considered to be mere lip service or to be the exception that proves the rule, and their positive acts will be suspected of serving a hidden agenda or rejected as too little too late.

The solution, then, is to recognize that reality is complex and to embrace its various facets. This is in fact the most realistic perspective. Our having been created with two eyes, left and right, enabling us to integrate different perspectives into a rich, multi-dimensional, whole picture, is perhaps a paradigm for how best to regard other points of view than our own.

Jewish mystical teachings suggest that this is the deeper meaning of the word temimut, which could be translated as integrity or completeness. Jacob is described in the Torah as “an innocent [tam] man, dwelling in tents” (Genesis 25:27). According to the Zohar, this phrase indicates that Jacob resided in many different “tents,” and was able to see the various faces of reality. He incorporated Abraham’s beneficence with Isaac’s orientation toward strict judgment, and knew how to integrate them into a cohesive whole. This complex perspective, which is the perspective of the Sefira of Tiferet, or beautiful synthesis, was characteristic of Jacob, as it is written, “Grant truth to Jacob.” Truth is associated with integrity; dares to see the diverse, complex faces of reality: “The Lord’s Torah is complete [temima]” (Psalms 19:8).

This type of truth, of completeness, demands that we see the good in ourselves – and also that we be capable of self-criticism. That we develop a penetrating perception of the other, in which we can both condemn their malevolence and recognize their positive traits. It is correct to criticize, but we need to appreciate the fuller picture.

This is necessary within the Jewish sector, and even more so in the context of Jewish-Arab relations. The need to find a way to coexist with two million Arab citizens of Israel does not constitute a special favor that we Jews do for them; rather, it is a profound existential requirement for all of society. True, people who see the situation through rose-colored glasses and imagine that there are merely a few minor misunderstandings are naïve and detached from reality. The picture is clearly far from rosy, as was driven home to us forcibly during the riots in the mixed cities during May of 2021, which were among the most violent events the country has known. Further, we should not close our eyes to the fact that one hundred people are murdered every year within the Arab sector. But the risks and challenges embodied in our circumstances present us with all the more reason to adopt a nuanced and careful way of seeing.

A doctor treating someone with complicated medical issues must first discern which of the patient’s systems are healthy and which are diseased. If the illness has spread to every system, the treatment cannot be focused and healing becomes impossible. But when the doctor identifies the precise diagnosis and recognizes the patient’s healthy and sick areas, then the patient may be able to recover. Pathological dualism is guilty of populism, of seeing evil everywhere, and of undermining society – which harms Jewish citizens as much as Arab ones.

A society marked by tribalism and division destroys the deep significance of a Jewish state. Growing up in the United States, I didn’t feel hated, but I was always aware of being a small minority in a large, populous nation. When I made aliyah, I relished no longer being part of a minority, or special-interest group. I enjoyed the feeling of all of us “being in it together” as we built the state. Tribalism returns us to a Diaspora mentality, to the feeling of being a small minority surrounded by people who are foreign to our experience or even foes. A profound message of the book of Genesis is that it is possible to forge kinship among brothers even when they are rivals. As my father-in-law, Professor Uriel Simon, taught me, Genesis is replete with bitter sibling rivalry: Cain and Abel, Isaac and Ishmael, Jacob and Esau, and Joseph and his brothers. Each of these relationships is characterized by complexity and at times even hatred. And yet, the Torah suggests that alongside the alienation and hostility there also exists the possibility of repairing the rifts, of healing, and of reconciliation. Isaac and Ishmael eventually make peace over their father’s grave; Jacob and Esau meet up and weep, kiss, and embrace one another; and Joseph and his brothers undergo a transformative process at the end of Genesis that allows them to live together as one nation, to progress from disconnection to restoration.

Let us pray that we merit healing, as in the words of the Zohar: “Healing will occur only if we look at the other face-to-face.”

About the Author
Yakov Nagen is the Director of Ohr Torah Stone's Blickle Institute for Interfaith Dialogue and the Beit Midrash for Judaism and Humanity. He is also a Rabbi at the Yeshiva of Otniel. His book "Be, Become, Bless - Jewish Spirituality between East and West" was recently published by Maggid.
Related Topics
Related Posts