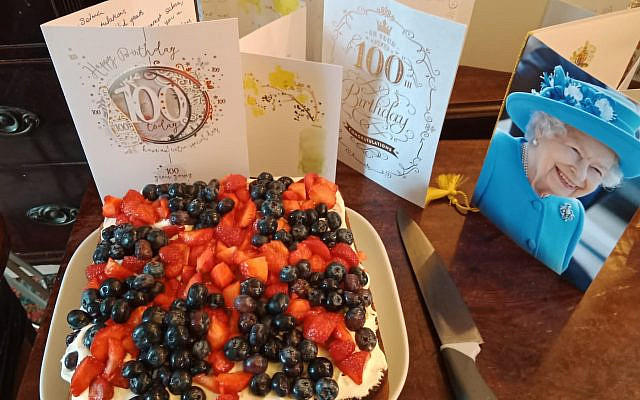 Women don’t simply run past, just make eye contact or slightly nod their head. No, I get full hand waves, giant smiles, cheerful “hello”s and a total feeling of complete companionship for a couple of seconds.

Welcome to England, where I am running in the lush green park.

As soon as we land at the airport, the officials welcome us with a smile and usher us safely from the bus to the terminal. At the cafés, I get polite smiles and laughter when I buy our drinks. And at the restaurants, the customer service is second to none. Waiters and waitresses who show us they care.

It’s a very strange thing having a life in two different countries. Almost on passing through passport control, I have to tell myself to slow down, to take down my guard, to smile and to relax.

And that’s not because Israel is a bad, fraught, hostile place. It’s just not at all the same as England.

We went for our aunt’s one hundredth birthday – she was having two parties. The first was a small, family affair in her beautiful house in West London, where tiny, rectangular smoked salmon sandwiches were served, with plenty of cups of tea, a glass of champagne, little chocolate brownies and a blueberry and strawberry birthday cake – red, white and blue, in honour of the Queen’s jubilee.

In fact, there was even an uncanny resemblance between my Dutch aunt and the Queen, both sitting on their chairs, regally and gently being served English tea.

On the morning after our arrival, where my sister and her family live, there was a street party, and we all tumbled out into the grey morning to eat scones and drink Earl Grey. My sister was wearing a red, white and blue skirt, her husband, a blue suit with a white shirt and red tie.

The meringues on the table were all pink, white and blue and it was very cute.

And in case Israelis ask, (some already have) the Queen didn’t visit us personally. But she did send a card to our aunty to congratulate her on this extra special day – so she was certainly with us in spirit.

How do I feel about this Queen?

I have no idea. I taught an Israeli student last year who is utterly obsessed by the royal family and wanted to know everything about them. Needless to say, she knows far more than I do. I don’t know them and they don’t know me so I don’t feel I need to ‘follow’ their lives. In fact, I feel pretty sorry for them all. They have no privacy, and as has been shown just this year, they don’t choose to be royal and sometimes really don’t want to be.

Four years ago, our aunt was persuaded to write a book about her life as a heroine of the Dutch resistance in the Second World War. ‘My name is Selma’ has since been published in Dutch, English, American (!), Spanish and Hebrew and is a bestseller. So she is like the Queen; she also didn’t choose to become well known.

Our second party, at the Roehampton Club, was very posh. Very ‘British’. I would have loved my Israeli students to be flies on the wall so they could drink in some of the culture, as I drank my wine and champagne. (Alcohol always helps me to embrace small talk, rather than reel against it!)

Mostly the talk was about the weather. The difference between Israel and England. The constant rain in the summer. Why does it always rain, we all asked. And how far we’d travelled for the party, how far the Dutch people had travelled, how long we were all staying, where we were all staying, and of course, Aunt Selma’s book. A few different people came to tell us it was they who persuaded Selma to write about her life. We had some interesting conversations with the editor and publisher – because I write too and they were interested in my work.

But generally conversation in England is light and pretty.  Of course, I’m generalising. There are indeed those, like my twenty-seven-year-old son-in-law just elected as a local counsellor, who do discuss serious matters and work to make the world a better place.

But often there’s a list of dos and don’ts, I suppose. Nothing can be discussed which is remotely personal, political, or controversial.

In Israel, we often go to places where the only things discussed are personal, political and controversial.

I was grateful for the delicious wine and the vegan cake. I love to people watch.  And I wished I could be five again, as I gazed at our son running around the garden, enjoying playing catch with one of the Dutch friends who was a little bored.

Selma looked like she was having a good time, and said as much in her speech.

The party was a great success.

But I breathed a sigh of relief when we set off home and stopped on the way at a north London Israeli restaurant to have a plate of hummus and chips.

And I could finish there, on a very light note, with the moral it’s interesting how we always hanker after what we don’t have.

But there’s a much deeper and distressing story I wish to tell before I sign off.

The day we were travelling back, two peace groups informed us over WhatsApp of the death of a young woman, Johara Khnefess. She was beautiful both inside and out, strong minded and courageous, and had spoken out against violence in Arab society. As she was entering her vehicle, in Shefaram, the town where she lived, a car bomb exploded and blew her to pieces.

A twenty-eight-year-old peace activist, changing the world with her strength and faith and love, and she was slaughtered, just like that.

We went to the house of mourning yesterday, where her mum was crying and sobbing and wailing over the death of her inspirational daughter. My husband joined the men, where the father was striving to hold himself together, as befits the deputy mayor of the town, while greeting the hundreds of people who had travelled from all over the country to show solidarity.

And we took our son with us, because we wanted to show him, young as he is, how unjust things happen in the world and how we need to love each other as much as possible for as long as we have.

He saw me crying and he asked why, and I tried to explain I was sad for them.

But I’m not just sad. I’m furious, frustrated. What can we do to stop this kind of violence? I am so tired of going to support grieving families. I need to do something to prevent all this wasted life!

It was incredible. We were not even out of England, and yet this atrocity was thrown into our path to remind us of one of the real differences between Israel and England. It’s not the shallow cultural stuff. That doesn’t really matter – it’s easy to adapt to that. It’s the fact that in this amazing region, people are paying for peace with their lives every day. People are fighting for peace. People are praying for peace. And yet others continue the cycle of violence and hatred because it is all they know.

And I realised, not for the first time, the reason why Israelis and Palestinians don’t really have the time or the inclination to talk about the weather. There is far more than rain at stake.