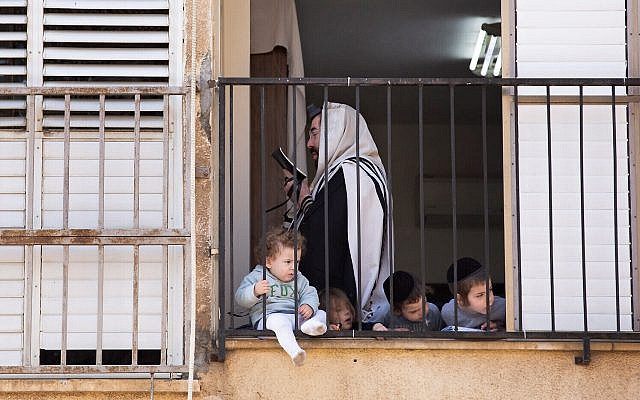 An ultra-Orthodox man prays at home, during a lockdown following the government's measures to help stop the spread of the coronavirus, in Bnei Brak, April 8, 2020. (AP Photo/ Oded Balilty)

It is the nature of media to focus on short term news cycles. And in recent cycles, Haredi non-compliance with — and sometimes violence resistance to — coronavirus restrictions have often been prime fare. While such has its place, it is arguably even more important to understand the deeper implications of the restrictions on the religious community.

I began thinking about this after coming home from a Corona-attenuated lifecycle celebration at my synagogue the other morning. Like most such events, it was and mixture of happy and sad. Happy for obvious reasons; sad because of the way most of these things must be done this year: we were exactly 10 slightly shivering men (along with a few women and children from the family) outside on the terrace. Only a few of us stayed to share in pre-prepared individualized trays, quickly eaten, while sitting apart at proper distances. True, these types of gatherings have their own beauty and warmth, but they also reflect the terribly impoverished state of the community almost an entire year into living with the pandemic.

More notable than the people who came that morning were the people who didn’t. I haven’t seen the majority of my synagogue’s members since last Purim. And since many of our activities are attenuated or completely suspended, I spend less time with the people who still do come. Largely due to matters we cannot control, we have learned to live further apart.

It is somewhat bitterly ironic that the Jewish thinker most prepared to address this issue was taken away from us this year. I refer to Rabbi Jonathan Sacks, whose writings championed the role of the community in our lives. Already in his 1988 essay, Jewish-Christian Dialogue, he identified the communal — as opposed to the individual or the state level — as that area of life in which secular modernity was weakest and traditional religion strongest. He suggested that it is also the arena within which one is most likely to find meaning.

But it is not just religious meaning that is created for us by the community. It is much more. About a decade after Sacks’ essay, Robert Putnam’s famous Bowling Alone detected a more pervasive and existential need people have for face-to-face communities. Putnam pointed out the late 20th century thinning out of community was not only a threat to the health of individuals, it was a threat to the health of society as a whole.

While communitarian writers like Sacks and Putnam brought about a great deal of awareness, it is debatable whether they had a significant effect against the powerful entropic forces that continue to push all of us increasingly apart. Yet this turning inward had never been completely universal. As both writers recognized, religious groups have been the most significant exception to the rule. It is not that they were not affected by the same forces as bowling leagues, book clubs, and environmental groups; it is just that they weathered them better. Presumably, that had much to do with the relative importance a person attaches to religion, as opposed to bowling, but the reason need not concern us here. What is of concern is the pandemic’s impact on the one lone fortress of communitarianism left in the Western world.

Many of us are frustrated — and even angry — about the lack of compliance with coronavirus restrictions in parts of the religious community. Let it be completely clear that I am not coming to condone it. And when it comes to violent resistance, I believe that Chief Rabbi Yitzchak Yosef speaks for the overwhelming majority of Orthodoxy when he proclaimed that such people are desecrating God’s name, and that their actions have nothing to do with the Torah they think they are protecting.

All this notwithstanding, it is important for the general community to understand that the coronavirus restrictions are exacting a far higher price from the religious than from others. Interestingly, the price is not primarily religious, but rather one of social solidarity and self-understanding. Regardless, even as we cannot condone the apparently greater level of restriction violations in the Haredi community, we need to understand that it is proportional to what is at stake for it. The more a face-to-face community identifies itself as a community, the greater a price there is exacted.

The second message is to the vast majority of religious Jews (and actually members of all religious communities) who have paid the price of living our lives within the restrictions. We have learned many things this past year. Whether while praying or studying religious texts at home or conducting a Seder for one or two or four, we have learned how to become more comfortable with solitude in front of God. But not everything we have learned has been positive, for we have also learned that it is pragmatically easier to live apart than it is to live together. It has been easier to pray alone. It has been easier not to have guests on Shabbat and holidays. It has been easier to give classes and talks over Zoom and not traveling to give them in person. In short, the seductive ease that that Putnam identified as taking its toll on the general community threatens to destroy our communities as well.

So as we slowly come out of this and restrictions begin to safely be removed, we will need to robustly put our ease aside and rebuild our communities. We will need to do so not only for ourselves, but for others as well. As it is not just the religious who thrive from community; it is arguably a central component of what it means to be human. That being the case, any thriving community must keep the model alive. For, at the end of the day, I believe it inevitable that modern man will rediscover its centrality. That, however, is only if COVID-19 has not already rendered the model extinct.