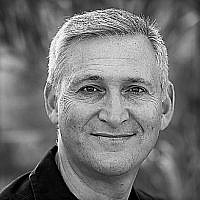 The Blogs
David Harbater
Apply for a Blog
Please note that the posts on The Blogs are contributed by third parties. The opinions, facts and any media content in them are presented solely by the authors, and neither The Times of Israel nor its partners assume any responsibility for them. Please contact us in case of abuse. In case of abuse,
Report this post.

I believe that to understand the religious significance of the State of Israel one need not look any further than a simple and straightforward reading of the biblical narrative.

The first words uttered by God to Abram are: “Go forth from your native land and from your father’s house to the land that I will show you”. Soon after arriving in Canaan, God promises “I will assign this land to your offspring”. The promise of the land, along with the promise of offspring, was repeated to Abram, then to Isaac and then again to Jacob. Prior to Jacob’s departure from Canaan to Egypt, God reassures him “I Myself will go down with you to Egypt, and I Myself will also bring you back”.

After years of slavery and oppression in Egypt, the Jews cried to God. “Their cry rose up to God”, God heard their moaning, and remembered the covenant with Abraham, Isaac and Jacob. God therefore declared: “I have come down to rescue them from the Egyptians and to bring them out of that land to a good and spacious land, a land flowing with milk and honey”. Then, after the Exodus and the splitting of the sea, He guided them through the desert to Mount Sinai where they received the Torah before they were to embark on the final journey into the land of Israel.

The centrality of the land of Israel is not only clear from the biblical narrative but also from biblical law. A cursory examination of the mitzvot in the Torah will reveal that while many mitzvot can, in theory, be fulfilled by the individual anywhere, the Torah legislates a wide-range of mitzvot — such as laws pertaining to the conquest and settlement of the land and the conduct of warfare, to the eradication of idolatry, to the Sabbatical year and the Jubilee, to the appointment of leaders and the establishment of a judicial system, to the building of a central place of worship, to regulations relating to agriculture, farming and tithes, and to the relationship with the neighboring countries — which can only be fulfilled by the people living as a sovereign nation in their own land. Furthermore, even Pesach, Sukkot and Shavuot are festivals of pilgrimage within the holy land and the Torah refers to both Shavuot and Sukkot as holidays celebrating the produce of the land. It is for this reason that the Torah emphasizes repeatedly “These are the laws and rules that you must carefully observe in the land that the Lord, God of your fathers, is giving you to possess, as long as you live on earth”. The Torah states that the ultimate goal is the creation of a “kingdom of priests and a holy nation” as a sovereign people in their land.

With the Torah in hand, the People of Israel began their journey to the land. Along the way, however, the journey came to an abrupt halt. The tribal leaders who were sent to scout out the land returned with a frightening report describing it as a land “that devours its settlers”. Upon hearing this terrifying report “the whole community broke into loud cries” and they “railed against Moses and Aaron: “If only we had died in the land of Egypt or if only we might die in the wilderness! Why is the Lord taking us to the land to fall by the sword…” For this lack of faith, and for their rejection of the holy land, God threatened to strike the People with pestilence and to disown them. Only after Moses intervened in their behalf did God pardon them and agree to allow the next generation to enter the land. The current generation, however, was destined to suffer a horrible fate: “In this very wilderness shall your carcasses drop.”

Later, after 39 years of traversing the desert the second generation was poised to finally enter the land. Now, however, a different problem arose. Rather than express fear of defeat in the battle for the conquest of the land, two of the tribes- Reuven and Gad — were attracted by the economic opportunities that existed outside the land. They “owned cattle in very great numbers” and wished to settle in the regions of Jazer and Gilad — areas known for their excellent pasture-land — which were located on the eastern side of the Jordan.

Predictably, Moses was outraged: “Are your brothers to go to war while you stay here? Why will you turn the minds of the Israelites from crossing into the land the Lord has given them” and he compared their request to the report of the scouts who “turned the minds of the Israelites from invading the land that the Lord had given them.” Although they were able to negotiate an arrangement whereby they would go first during the conquest, and serve as the vanguard in exchange for the permission to settle in the areas which they sought, this was likely a concession on the part of Moses (interestingly God played no role in this negotiation!) aimed at preventing a nation-wide insurrection similar to the one that had occurred earlier.

During the 40th year after the Exodus, in the land of Moab on the border of the promised land, Moses delivers his farewell speech to the People of Israel. In this speech Moses tries to prepare the People for the conquest and the settlement. He recounts many of the major events that led to this point and emphasizes the importance of loyalty to God and of following the mitzvot upon entering the land. He promises that adherence to the will of God will lead to prosperity and a long life in the land while sin will evoke God’s wrath, bring about economic ruin and lead, eventually, to their expulsion from the land.

Sadly, despite all that Moses had done in behalf of the people throughout his lifetime, he himself would not be allowed into the land. Although he pleaded desperately for the permission to witness the fulfillment of his dream and the culmination of his life’s work, God allowed him only to “Look at it well” but He did not grant him the right to cross the Jordan and enter the promised land.

Unlike Moses, we today have been privileged to enter the promised land and enjoy our independence as a people after two thousand difficult and tumultuous years in the Diaspora. We now have the opportunity to take control of our own fate, to establish a society based on the beliefs and values which we hold dear, to utilize our creativity, ingenuity and technological prowess as a people to make the world a better place, and to fulfill our mission of becoming “a kingdom of priests and a holy nation”.

Sadly, many Jews around the world choose to remain abroad rather than partake in the incredible miracle that is the State of Israel. Sadly, some of these Jews believe that visiting Israel and supporting Israeli causes from the comfort of their homes in the Diaspora is a viable alternative to living here and contributing to Israel’s growth and development as citizens of the Jewish state. Sadly, many others living outside the land study and read the Torah, and consider themselves devout and committed Jews, while ignoring the Torah’s underlying message and its broader vision.

About the Author
David Harbater teaches religious education and Jewish identity at Herzog College and Jewish thought at Midreshet Torah V'Avodah (TVA). He lives with his family in Efrat. Thoughts and comments may be sent to dharbater@012.net.il
Related Topics
Related Posts
Comments