The Blogs
Shayna Abramson
Apply for a Blog
Please note that the posts on The Blogs are contributed by third parties. The opinions, facts and any media content in them are presented solely by the authors, and neither The Times of Israel nor its partners assume any responsibility for them. Please contact us in case of abuse. In case of abuse,
Report this post. 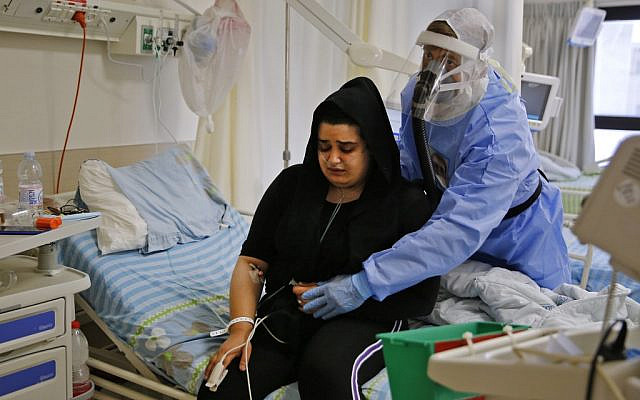 A patient undergoes physiotherapy to help with oxygen circulation at the COVID-19 isolation ward of Meir Medical Center in Kfar Saba on September 9, 2020. (GIL COHEN-MAGEN / AFP)

There’s an enemy at the gates. Instead of uniting to fight the enemy, different factions are bickering at each other. The religious leaders are corrupt, and seek political power. The politicians bow to public pressure.

These words could describe the destruction of the first two Temples, and the Jewish people’s expulsion from the land of Israel.

The Babylonians and the Romans are marching. Instead of uniting under siege, different Jewish factions in Jerusalem fight with each other, to the point of destroying each other’s food, thereby limiting life-saving supplies. The prophets pander to the kings, in search of power -so they only give them good news. They also pander to the people, telling them emphatically that they are Chosen- God would never harm their Temple. The kings forge alliances with unreliable nations, like Egypt, because that’s what plays well on the streets.

But of course, these words also describe Israel today.

Coronavirus marches. Instead of uniting to fight the virus, different factions fight with each other: Each lays responsibility for the disease at the others feet; each says that it is the other’s obligation to obey life-saving guidelines; each says that the rules aren’t fair, because they adversely affect their faction more than the others, and they won’t keep rules that aren’t fair. The Ultra-Orthodox leadership prioritizes seeking political power and pandering to its base over saving lives; it threatens to leave the government unless its voters get a special Rosh Hashana trip to Uman. Major Ultra-Orthodox rabbis tell the people to prioritize their Torah study and way of life over Coronavirus regulations: God will protect them. The government does what is popular – namely, not proposing any meaningful Coronavirus regulations that might affect daily life – at the expense of the country’s health and stability.

I have never been one of the Religious Zionist Jews who believes that Israel is the beginning of the Messianic era. I have always believed that the jury is still out there: Maybe it is, maybe it isn’t. I’m not a prophet. If anything, I believed that whether it would or would not ultimately lead into the Messianic era depended on how we behaved as a sovereign nation. But recently, I’ve become increasingly existentially afraid for the continued existence of the Jewish state: If we behave as we did the first two times that God exiled us, then why wouldn’t we be exiled this time around as well?

I look around me, and I see a 3,000 year old religious saga replaying itself. I’m reminded of the quote by Karl Marx: “History repeats itself, first as tragedy, second as farce.”

The Roman exile was a repetition of the Babylonian exile, as tragedy. Are we now in the farce stage of the play? Our political leaders certainly do sometimes seem ridiculous in a way that verges on the comical.

As a religious Jew, I don’t see living in Israel as a right. I see it as a privilege that we must earn by acting as a holy nation. Throughout the Torah, we are warned that Israel is a holy land that “vomits out” nations that don’t live up to that standard.

And what does it mean to be a holy nation?

Vayikra 19 carries the injunction, “Holy you shall be”. While the chapter does contain some ritual commandments, most of it is focused on ethical obligations, such as the commandment not to curse a deaf person, and to leave aside grain for the poor during the harvest.

Just in case we’re wondering what the balance should be between ritual and ethics, Yeshayahu assures us that God sees our sacrifice and prayers as an “abomination” and a “burden” until we “Learn to do well; seek justice, relieve the oppressed, judge the fatherless, plead for the widow.”. (Yeshayahu 1:13-17)

Yet here we have an official religious leadership that prioritizes prayer and ritual at the expense of the vulnerable members of society, who are more at risk for Coronavirus. Their priorities are the opposite of those set forth by Yeshayahu.

I keep on mulling over a phrase in my mind, from Ethics of the Fathers: “What’s mine is mine and what’s your is yours -that is the trait of Sodom.”

At first this phrase seems confusing. After all, isn’t that just being fair? But on a deeper look, I think it becomes clear that when everyone is obsessed with protecting what’s theirs, what they “deserve”, then society falls apart, like Sodom.

This is what’s happening in Israel right now. Each social group is obsessed with protecting its “right” to a normal life; each one wants to protect what’s theirs. So there’s nobody left to worry about the larger good, or to recognize how we are dependent on each other. We are in a situation where, literally, the fact that we breathe the same air means that the health of my body affects the health of your body, and vice versa. It’s hard to be more interconnected than that.

The enemy is knocking at the gates. The first two times around, we weren’t able to find the unity we needed to survive the onslaught. Will we manage to learn from the mistakes of our history, or will we become mired in the sins of the past?