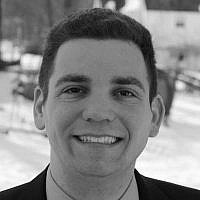 The Blogs
Aaron Spring
Apply for a Blog
Advertisement
Please note that the posts on The Blogs are contributed by third parties. The opinions, facts and any media content in them are presented solely by the authors, and neither The Times of Israel nor its partners assume any responsibility for them. Please contact us in case of abuse. In case of abuse,
Report this post.

The Jewish vote is often thought of as a loyal Democratic voting bloc, with Democratic Presidential candidates winning between 69% and 80% of the Jewish vote in every Presidential election from 1992-2020. From the surface, it seems fair to say that the Jewish vote is monolithic, however data from the 2020 Presidential election point to splits within the Jewish community, specifically amongst the ultra Orthodox population. According to the American Jewish Committee, just 6% of Jewish Americans identify as Haredi Ultra Orthodox Jews, however this small percentage of Jews holds significant sway, due to their population settling in tight knit geographic ethnic enclaves, unlike reformed or secular Jews, who are scattered throughout the general American population. While Haredi Jews make up a small percentage of the population, they are a fast growing demographic. According to Pew Research, Orthodox Jews are having children at twice the rate of non Orthodox Jews, with the average fertility rate amongst the Orthodox at 3.3 children per family, compared to 1.4 children per family for non Orthodox Jews. Given the ensuing demographic trends that are occurring, it is important to analyze how Orthodox Jews are voting, as their rightward shift in 2020 could have lasting implications in future elections, and not just in national elections, but in local elections as well. Here’s a snapshot of how the Orthodox Jewish Vote is trending in 3 localities with heavily Orthodox Jewish enclaves: Rockland County New York, Orange County NY, and New York City.

Orange County: Kiryas Joel is an Orthodox Jewish enclave located in the Town of Palm Tree that boasts a high rate of poverty, a large number of Yiddish Speakers, and according to the U.S. Census community survey, the youngest median age of residents in the United States. In 2016, Kyras Joel was a battleground between Mrs.  Clinton and Mr. Trump, as Mr. Trump won the Village’s precincts with between 50-60% of the vote throughout the Village. In 2020, the Village swung heavily toward Mr. Trump, as the incumbent President earned between 98% and 100% of the vote in the Village’s precincts, a nearly 40 point swing. Possible factors that led to the near monolithic vote for Mr. Trump amongst the Kiryas Joel Haredi Voters could include Mr. Trump’s unapologetic allyship to the Nation of Israel, as well as Jewish Voters’ anger toward pandemic era restrictions imposed by then Governor Andrew Cuomo.

Rockland County: After losing Rockland County 51% to 45% in 2016, Mr. Trump nearly flipped the County in 2020, as he lost to Mr. Biden 50%-49%. Mr. Trump’s gains were almost entirely fueled by Orthodox Jewish Voters, as he only lost the County by approximately 2,700 votes. After backing Mrs. Clinton in 2016 with more than 90% of the vote in all precincts, the voters of New Square flipped to Mr.  Trump, as he earned 99-100% of the vote in all precincts in New Square in 2020, after failing to break out of single digit support just 4 years earlier. One precinct in New Square gave Trump 1,085 votes to Mr. Biden’s 4 votes, while another gave Mr. Trump 604 votes while Mr. Biden failed to secure a single vote in the precinct. In addition to New Square, other heavily Orthodox enclaves in Rockland County, such as Monsey and Kaser, backed Mr. Trump with between 90% and 100% of the votes. Should the Orthodox Jewish vote become a permanent Republican voting bloc in Rockland County, it is plausible that the County may flip in future Presidential Elections, and possibly affect congressional, state senate, and state assembly races.

New York City: In the Williamsburg section of Brooklyn, Mr. Trump healthily outperformed Mrs. Clinton in 2016 in the Orthodox enclaves in the neighborhood, earning between 50% and 70% of the Orthodox precincts. Just 4 years later, Mr. Trump outperformed Mr. Biden by an even larger margin, earning more than 90% in most Orthodox precincts, while earning between 80% and 90% of the votes in the precincts where he could not crack 90%. In Crown Heights, Mr. Trump and Mrs.  Clinton split the Orthodox Jewish precincts in 2016, Mrs. Clinton earned as much as 62% in one precinct. Four years later, Mr. Trump outperformed Mr. Biden and flipped multiple precincts, with one precinct backing Mr. Trump 60% to 39% after backing Ms. Clinton 52% to 44% just 4 years earlier, and another precinct giving Mr. Trump 56% of the vote in 2020, after giving Mrs.  Clinton 56% of the vote in 2016. In Midwood, and Boro Park, Mr. Trump outperformed Mrs.  Clinton by 50-60 percentage points in most precincts, by 2020 Mr. Trump had improved this margin over Mr. Biden by margins of 70-80 percentage points. Democratic support in Boro Park had registered in the high teens to the low 20s in 2016, these numbers eroded to the low teens or even single digits by 2020. Again, Mr. Trump’s perceived loyalty to Israel, and Orthodox Jewish backlash toward pandemic era restrictions may have shifted Orthodox Jews even further to the right during the 2020 cycle.

The sharp rightward shift of the Orthodox Jewish Vote could bode well for the GOP moving forward. In 2020, Republican Michael Lawler flipped the 97th  State Assembly District in Rockland County, beating an incumbent Democrat. In the 2021 NYC municipal elections, Kalman Yeger earned more votes on the Republican line than he did on the Democratic line in his Boro Park based 44th city council district. In the 48th city council district, Republican Inna Verkinov won a landslide victory against Democrat Steve Saperstein, as she was buoyed by support from Orthodox Jews in Midwood and Russian speaking Jews in Brighton Beach and Manhattan Beach. While the overall Jewish vote will remain strongly Democratic, the support for the GOP coming from Hasidic enclaves could allow the GOP to compete in congressional, state senate, and assembly races in the Hudson Valley, and remain competitive in Southern Brooklyn municipal and state races.

About the Author
Aaron Spring is an elected official, candidate for a J.D., and a philanthropist/community activist residing in Westchester County. Aaron dedicates his free time to cleaning litter off the streets, coaching and mentoring youth, and helping those in need.
Related Topics
Related Posts
Comments