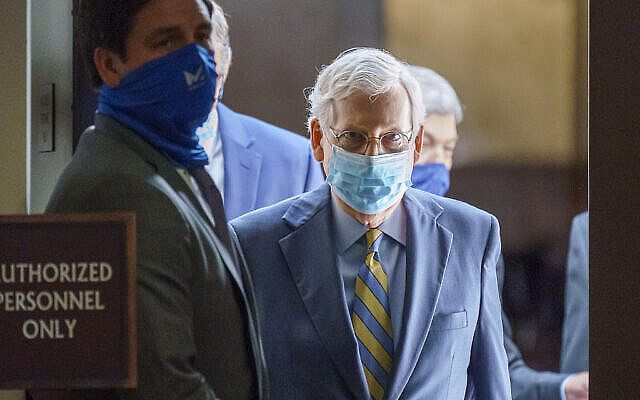 Many Israelis have grown accustomed to admiring the US Republican party, out of gratitude toward what is perceived in this country as the generosity and support of President Trump. They need to snap out of it.

The Democrats will be in power for at least four years, and decades of election results suggest they enjoy the natural majority in America. This week’s release of funds by the General Services Administration for the transition to Joe Biden should make this clear.

Even if the Republicans hold on to the powerful Senate – and they may not, depending on the twin Georgia runoff on Jan. 5 – foreign policy in America is directed by the White House.

Donald Trump indeed used that power to give Israel several gifts that are held in wide consensus here, in particular recognizing (West) Jerusalem as its capital (no other country gets told what its capital is) and the annexation of the Golan (which is a very small land-grab from a failed-state dictatorship in the grand scheme of things). He also deserves credit for pushing for peace deals with Gulf and other Arab countries.

Yet he also did Israel terrible damage by enabling it to run riot in the West Bank and interfering electorally on several occasions on behalf of a corrupt and self-destructive right-wing government of Benjamin Netanyahu. And mostly, Trump is a friend of Trump alone: his motivation were almost certainly to placate his Evangelical base which supports the Israeli right as part of nutjob End Days scenarios which do not favor the Jews.

Nonetheless it is clear that Israelis were among the few societies on earth — and the only one in the developed world — to favor Trump over Biden. Gratitude is generally a felicitous sentiment, but this Faustian bargain will not be remembered as Israel’s proudest moment.

It is worth remembering that when George W. Bush came to power 20 years ago Israelis were concerned that the Republicans were in the pocket of Arab oil interests, and greeted the incoming president with suspicion. It was 9/11 that changed this.

It is faintly amusing to see Donald Trump refusing to concede, like a toddler who won’t be parted from a toy. But the reputational and material damage inflicted on America by his flailing efforts to overturn the 2020 election, in which today’s Republican leaders is painfully complicit, are not funny at all.

By this point observant Americans should have forsworn all expectations that this titanically unworthy individual might respect norms, play fair, listen to reason, feel shame about lying, or put his country first. And the logic-challenged incumbent may well have convinced himself that he could have lost without fraud, therefore he won.

Not so the Republican leadership. Mitch McConnell, Lindsay Graham, Ted Cruz and the other enablers in the Senate know better, as do Cabinet types like Mike Pompeo. They know there are always irregularities but that these rarely swing elections and to falsely claim this one was stolen is destabilizing to the point of sedition.

We hear whataboutist comparisons to Bush-Gore in 2000, a legitimate cliffhanger which swung on a few hundred votes in a single state. Meanwhile, Biden’s defeat of Trump is bigger by vote margin (over 6 million), vote percentage (over 3%) and electoral votes (306) than George W. Bush’s over John Kerry. There were surely irregularities in 2004, but can anyone imagine Kerry being such a sore loser?

Team Trump argues the high number of postal votes caused by the pandemic increased fraud. The main “evidence” is that postal votes skewed heavily for Joe Biden and that Trump led in key places on election night. In fact there’s no mystery: Trump encouraged backers to vote in person and Democrats took Covid more seriously. Many states count postal votes last so the lead sometimes flipped.

Republican leaders have seen legal challenges being thrown out of courts around the country, have surely noted the paucity of evidence and can do the math on the improbability of overturning the result. Michigan and even Georgia have now certified Biden’s win. Yet on Tuesday this week, Trump called into a GOP event in Pennsylvania to rant about overturning the election results.

If Republican leaders were honest with the public they might stand together as one and declare there’s no evidence of widespread fraud and the election was not stolen. That would have a significant effect — if not on Trump, certainly in public opinion.

By pretending not to understand anything, Republican leaders lend the stolen election narrative wings. Polls show anywhere from 70% to close to 90% of Trump voters now believe the lies and will consider Biden illegitimate.

Meanwhile they have stood by as Trump refuses to meet with Biden or instruct his team to begin the orderly transition that is mandated by law and desperately needed both to minimize Covid deaths and preserve national security. This week the General Services Administration finally rebuffed Trump and released the needed funds for Biden, without much indication that key Trump officials will do their part.

It will take a while for the world to trust in American leadership again. With a few Mideast exceptions Trump leaves behind scorched earth, the Republican leadership’s attitude screams banana republic, and the party may actually be back in the saddle in 2024.

This lamentable situation might make us more humble about harshly judging other societies that throughout history fell prey to populist authoritarians who both sowed and feasted on divisions, as Trump most certainly has done.

Thanks to both sides but especially the right, political hatreds in America are at the point where most Republicans and almost as many Democrats see the other side as immoral (see Pew poll). Such toxic polarization is a recipe for disaster, and the stolen election invention risks tipping us over the edge. I have seen it as a foreign correspondent, from Africa to the former communist world, from the Middle East to central Asia. This sparks civil wars.

Republican leaders are playing with fire. Why do they do it?

Sadly, for many people the Republican Party has become synonymous with monkey business. They won the popular vote just once since 1988 and to retain any power rely on intense gerrymandering, voter suppression among minorities and other machinations that are technically legal but stink to high heaven. When Republicans rammed Amy Coney Barrett onto the Supreme Court days before this election, the remarkable thing was not their hypocrisy (given their 2016 insistence, when President Obama was the nominator, that an election year precluded such appointments) — but the absolute absence of any sign of shame.

They presumably enable Trump’s outrages because of crafty calculations.

First, Trump’s base seems to comprise the majority of Republican voters. That means he might continue to rouse rabbles, make kings and win presidential primaries, so crossing him is perilous.

Second, the grievance narrative may help get out the Republican vote in Georgia, where the twin January 5 runoff will determine who controls the Senate. If the leadership abandons Trump, his base might abandon them. The police will be defunded! Religion will be banned!

Fearing Trumpism is reasonable enough, but dancing with the devil can cut both ways: it may also turn out every last Democrat and independent in the state – and then the Democrats will control the Senate as well. The devil, at last, has come down to Georgia.

Even though America is a power in decline, it is still indispensable, as Madeleine Albright asserted in 1998. That holds especially true for Israel; though it is a prosperous and powerful nation for its size, it still needs the United States. Biden’s will not support every move of Netanyahu’s but he is a lifelong friend of Israel, without the circus bits.

Every Israeli should celebrate the end of a dark chapter in American history, and should hope that the Republicans are schooled convincingly enough that they decide to stop dragging their country down.