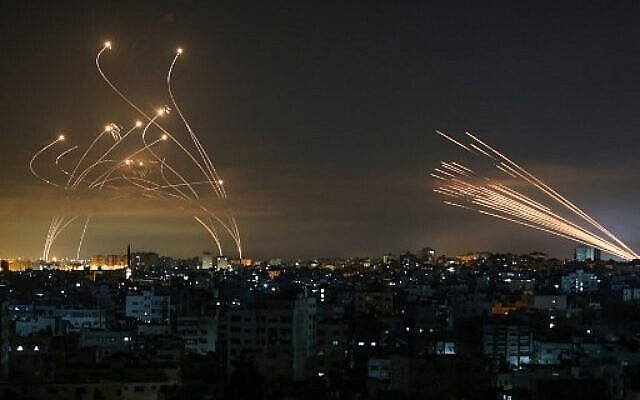 Gaza rockets clash with Iron Dome, The Times of Israel

One of the problems in the aftermath of any war is the blame game or the public relations campaign. Each side blames the other side totally and irresponsibly.

In the case of the recent 11 day mini-war between Israel and Gaza, this has certainly been true. Hamas, the Palestinians and much of the radical left in the USA, and in other countries, place all the blame on Israel. They say that Israel is the aggressor and they call Israel all kinds of names, using slogans that accuse Israel of being an apartheid state (which it is not) or a colonialist state or whatever.  They see no fault with the Hamas leadership or their methods of shooting rockets at innocent civilians all over Israel or the way they repress their own people.

On the other hand, the State of Israel and pro-Israel groups from abroad say that Hamas began the war with a brazen attack of rockets against Jerusalem, the capital of Israel. They refer over and over again to Hamas as a terrorist organization even though it has become a mini-state, with many factions and internal disagreements. Any country, they say, would have reacted with force against terrorists who attack their capital. They put all the blame on the other side, which is their usual method of propaganda.

I say that both the Hamas leadership and the Israeli leadership are responsible for this war. Both believe in brute force — organizational terror or state terror — as the solution to the ongoing crises that arise between the government in Gaza and the one in Jerusalem. Neither one seeks peace or an arrangement or a long-term truce (which is called in Arabic a hudna) with the other.

Let’s start with Hamas. Who exactly is Hamas? What are their goals and their methods of operation?

In January 2006, the Hamas movement won the majority in the elections for the Palestinian parliament.  Hamas, which is an Arabic acronym for the Islamic Resistance Movement (Harakat Al Mukawama Al-Islamiya) is a Palestinian Muslim organization, founded in 1987 by Sheikh Ahmad Yassin. It began as part of the Muslim Brotherhood, an international Islamic ideological stream which was founded in Egypt in 1928 as an Islamic revivalist movement.

From its establishment, Hamas was virulently anti-Israel and did not recognize the existence of the State of Israel, despite the fact that the PLO had done so in 1988 and again as part of the Oslo Accords in the early 1990s. In fact, Hamas ideologically opposed the recognition of and cooperation with Israel which had become the policy of Fatah, the main faction of the PLO, and of the Palestinian Authority, which emerged as the government of the Palestinian people after the Oslo Accords. According to the Hamas charter of 1988, Hamas sought to “raise the banner of Allah over every inch of Palestine.” They advocated for holy war, jihad, against Israel. As such, their leaders have been unwilling to negotiate with Israel directly. They do not believe in the idea of compromise or relinquishing any territory that they feel is part of Palestine. As the conflict progressed, however, they eventually agreed to negotiate with Israel indirectly — through third parties like Egypt or Qatar or Germany — usually with regard to prisoner exchanges, such as the famous prisoner exchange in October 2011.

The Hamas leadership continues to be virulently anti-Israel. In addition, they do not serve the interests of their own people. Time after time, they have launched rockets at Israel, knowing that the response will bring death and destruction to their people. They don’t seem to care. They see them as martyrs (shahids) for the cause. Their irrational decision-making and their dictatorial government sustain the ongoing humanitarian crisis of their people in the Gaza strip.

One of the ironies here is that progressive groups abroad seem to not have noticed that Hamas is not exactly a progressive social justice organization. As Tom Friedman pointed out in an excellent op-ed in the New York Times yesterday:

As Hamas makes itself the vanguard of the Palestinian cause — and becomes its face — more and more progressives will come to understand what Hamas is — an Islamo-fascist movement that came to power in Gaza by a 2007 coup against the Palestinian Authority, during which, among other things, it threw a rival P.A. official off a 15-storey rooftop.   Moreover, after Israel withdrew from Gaza in 2005, and before there was any embargo, Hamas could have turned Gaza into a thriving entity. It chose instead to turn the territory into a launching pad for attacks on Israeli border posts and then to invest in 250 miles of attack tunnels and thousands of rockets. Today, Hamas openly aspires to replace Israel with its own Tehran-like Islamic government, which subjugates women and persecutes any L.G.B.T.Q. Gazans who want to publicly express their sexual identity. This is not a progressive organization — and Hamas will not enjoy indefinitely the free pass it has gotten from the left because it is fighting Netanyahu.

Now let us turn to Mr. Netanyahu and the Israel government. They are not blameless in this situation either.

On the contrary, Netanyahu’s extreme right-wing government — with the help of many groups in the settler movement who operate freely in Jerusalem and the West Bank every day — and with the help of organized thugs and hooligans like La Famila and Lahava — is guilty of persecuting, oppressing, beating, humiliating and occupying Palestinians all the time. In the Sheikh Jarrah neighborhood of Jerusalem, they have systematically worked to evict Palestinians from their homes. In the rest of East Jerusalem (part of so-called United Jerusalem), they have pursued a horrific policy of home demolitions for many years.

Most significantly, on the Temple Mount, which the Palestinians call Harem Al Sharif, where both the Al Aksa Mosque and the Dome of the Rock can be found, the Israeli Police have not acted wisely. Many analysts in the Israeli media have written about this, arguing that the police and security services should have been more sensitive to this highly combustible situation. Rather, they have been too violent on one of the most sacred spaces for Muslims, as well as for Jews, by using too much force, including grenades inside the mosque. All of this provoked Muslims and Palestinians within Jerusalem and in Palestine, and all over the world, creating the back-drop for this latest Gaza war.

Now that the war is over, this blame game has to stop! Instead, we need some positive and creative thinking. We need balanced leadership — who will work productively with the new Biden administration (rather than admonishing them at every press conference about the renewed negotiations with Iran). And we need more journalists — in Israel as well — like Tom Friedman, who will write constructive op-eds which suggest that perhaps now, despite all the obstacles and challenges, is the time to seize the moment as an opportunity for peace.

Perhaps a new government in Israel could arise to seize this moment. Not just a government without Netanyahu and the Ultra-Orthodox parties and the far-right-extremist parties. But a true government of change, which would seek peace and pursue it. I admit that it is not likely, but it is not impossible.

Also, new voices within Hamas need to be heard. The voices in the past that proposed the idea of a hudna — a long-term truce — which would be for the mutual benefit of the Palestinian people and the Israeli Jewish people, need to arise again. Hamas leaders must realize that war is counter-productive for them and their people. Pursuing another path would be difficult but not impossible. And eminently worthwhile.

Nothing is impossible. These constant wars get us nowhere. It is time to seek alternative solutions to our conflict other than the worn-out, useless, futile one of war. Both sides need to do this.

If you will it, it is no dream. (Theodore Herzl)