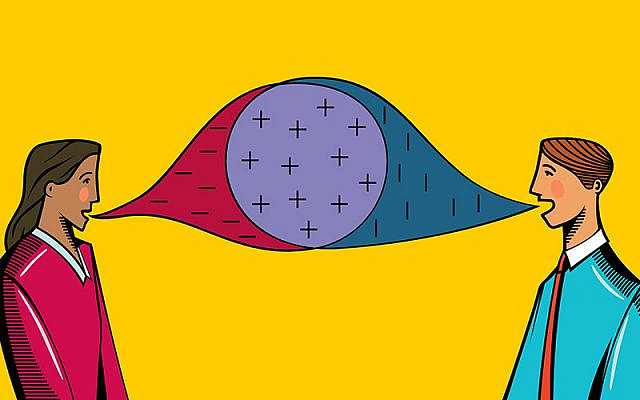 Back in the late 1960s and early 1970s, when I was in elementary school, my father, of blessed memory, was actively involved in political debate.  He was a vocal opponent of the Vietnam War, and had strong opinions about civil rights and other issues of the day.

He was fiercely critical of President Richard Nixon, and thought he was a crooked politician even before Watergate.  Two of my dad’s closest friends, both of whom lived in West Hempstead where we lived at the time, supported Nixon, because they agreed with his position on the war and felt that he was strongly pro-Israel.

I remember very lively and active political discussions at our Shabbos table between my dad and his two friends about Nixon and the war.  They were all passionate about their positions … but always respectful.  And when the political discussions were over, they were able to move on to other subjects seamlessly, without their partisan differences getting in the way of their other activities.

My dad played softball every spring with both of these individuals.  My parents went out to the movies socially with them and their wives, and invited them for Shabbos meals often.  Their kids played with my siblings and me, and we all were close friends.

I mention this because we have just experienced a four-year period where the exact opposite has happened – political differences have often spilled into other aspects of our lives, and brought out the very worst in many of us.

*A couple I personally know was publicly shamed and teased in front of their friends because they supported Biden in the presidential election and thought Trump was a terrible president.

*An anti-Trump individual posted a message on social media encouraging people not to eat at a certain kosher restaurant because the owner supported Trump, even though the owner made no public comments demonstrating his support for Trump or had nothing remotely political appearing in his restaurant.

*An article appeared in a Jewish publication, claiming that anyone who did not vote for Trump was violating halacha.

*A couple refused to allow their children to play with other children in their class because their parents supported Trump, and would not invite the family for a Shabbos meal to their home.

*Many people routinely unfriended others on Facebook and other social media, not because they posted an inappropriate comment, but rather because they simply supported an opposing candidate.

Unfortunately, there are many other examples in our frum community of these kinds of incidents.

Most folks, including myself, dealt with the issue by publicly keeping silent on the election, keeping our opinions to ourselves and not rocking the boat any more than it was being rocked.  It worked for me, in the sense that I avoided potentially nasty confrontations.  But is this a healthy attitude to have?  Shouldn’t we be able to discuss politics with our friends in a civil manner, even if we disagree?

The election is now over, and Joseph Biden will become our next president in January.

I don’t know if the Supreme Court will overturn Roe v Wade and rule that Obamacare is unconstitutional, as the Democrats would like you to believe.

I also don’t know if the Biden administration will cozy up to Iran and the Palestinians or whether they will implement socialist policies in our country, as the Republicans would like you to believe.

I stopped making predictions about politics a long time ago.  (As Neils Bohr – or was it Yogi Berra – once said, “It’s tough to make predictions, especially about the future.”)  But my guess is that we will not see these extremes that some pundits would like you to believe will happen.

What I sincerely hope will occur instead is that now we have elected a new president — who is seen as a decent and respectable person, even by most of his critics –we will return to an era where we will witness more civil discourse between those who disagree with us politically.

It may take a few months or even a year … the election is too fresh in everyone’s mind right now.  But I do think it will be something that we will gradually see.

No doubt my dad would be very happy if that happened.