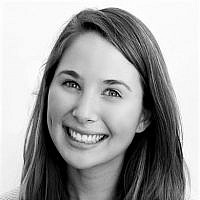 The Blogs
Aimee Millwood
Apply for a Blog
Please note that the posts on The Blogs are contributed by third parties. The opinions, facts and any media content in them are presented solely by the authors, and neither The Times of Israel nor its partners assume any responsibility for them. Please contact us in case of abuse. In case of abuse,
Report this post.

Liad Braude (known on social media as @RabbiLiady) has become, in the past 6 months, the number one Rabbi on Periscope.

With over 5,000 followers and an astounding 6 million hearts (Periscope’s method of showing love), Liad leads the way for tons who tune in daily for his talks – especially for the #Torah420 lessons for which he is known. 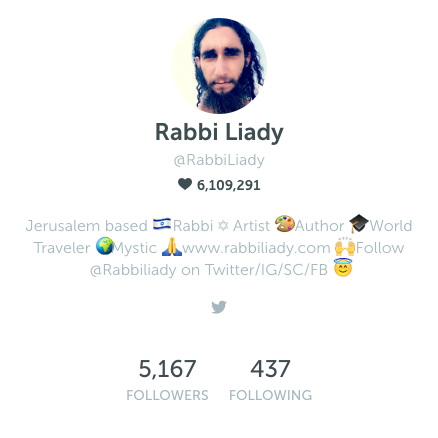 If Rabbis aren’t the first thing that come to mind when you think of Periscope, I don’t blame you.

By now, you’ve probably heard of people like Dr. Miami, who are also tapping into social media’s reach to demonstrate the impact of their day-to-day work to the world.

Like thousands of others who use social as a platform to spread their message and gain an audience, spiritual leaders are also beginning to realise that, while untraditional, social can get them global reach for their preach.

Liad Braude is originally from South Africa but recently made Aliyah from San Diego, where he grew up. He currently lives in Jerusalem, where he spends his days learning and teaching.

One reason for Liad’s success is his unconvential approach to Torah study, which is is attractive to many Millennials and others who may not traditionally show up each week to a shul.

He typically Periscopes 3-5 times a day – a morning Torah study, a #DriveByCharity (in which he accepts PayPal donations and gives away charity live on Periscope), and, of course, his #Torah420 lessons. 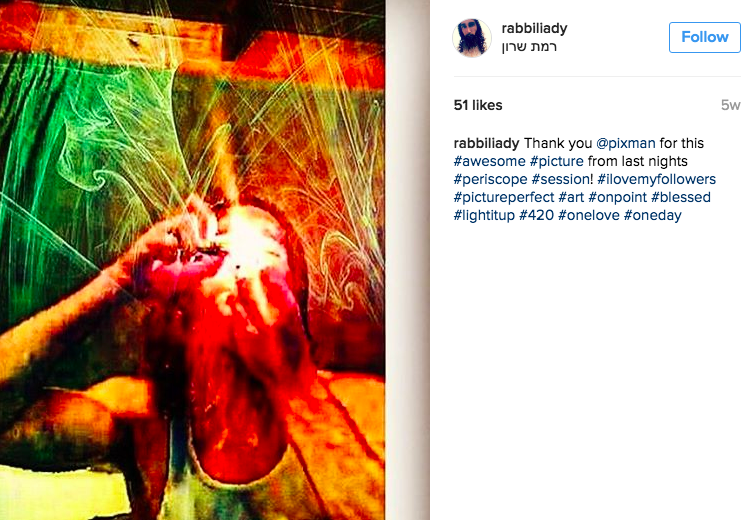 His method is flexible: some days, he may launch straight into a deep discussions of numerology, Kabbalah, or Jewish philosophy, while others, he simply smokes, laughs, and dances to Bob Marley.

One thing that stays constant is his impervious positivity.

Whether he’s arguing about Jesus or answering anti-Israel and anti-Semitic comments, he’s unnervingly positive and embraces all who genuinely want to come and learn more about Judaism.

As Dina Tiferes, a social media follower and friend of Liad, explains, “Through his scopes on social media, Liad has shown the world the tremendous gift he is to humanity. He is a giver, a giver of time, a giver of knowledge, a giver of love.”

Of course, his path isn’t without his challenges. Although, as he constantly reminds people, he’s not formally a Rabbi (at least in the sense that he has papers certifying him), he is no doubt a teacher – and an influential one at that.

But his self-proclaimed anointing of himself as a Rabbi is controversial to some, and slanderous to others.

While from the start, Liad has always insisted that he doesn’t have the papers to call him a Rabbi, he insists he is a Rabbi by the definition that his life’s work is to serve as a religious teacher.

While not everyone is ready to accept his calling himself a Rabbi, many Rabbis around the world support him and attest he is as knowledgable as any other Rabbi.

As Rabbi Levi Cunin from the Chabad of Malibu says, “My first introduction to Liad was on Periscope. It was my first time checking out the app, and naturally, I began searching for other Rabbis. Surprisingly, there was only a handful, one of which was Liad.”

“It did not take long for me to realize that together with his unconventional and non politically correct attitude, he is sharing so much love and warmth,” he continues. “Most importantly, he doesn’t just preach it, he tries to live it and to show others while he is at it.” 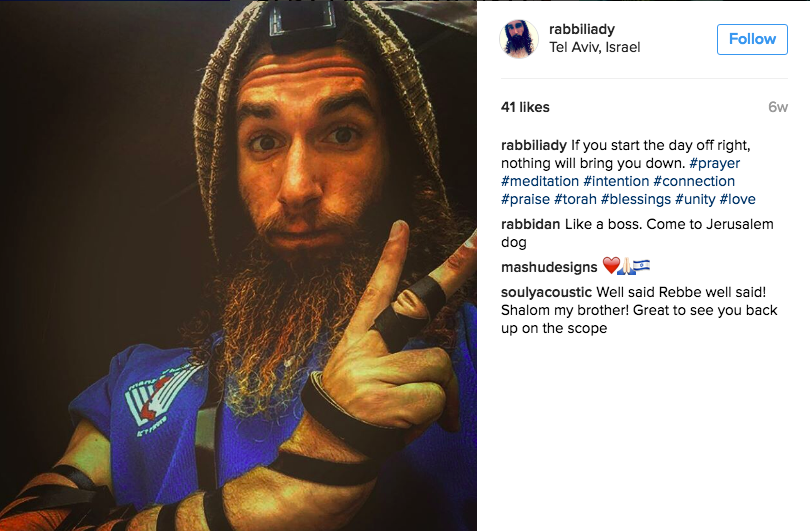 As Liad’s following has grown, so has the recognition from prominent Rabbis and organisations. He’s recently received invitations to speak at Stand With Us’ conference in Jerusalem and participate in the Global Meditation Scope, alongside 150 trained spiritual teachers from around the world.

Liad’s life theory hasn’t changed since he chose Mark Twain’s words as his high school graduation quote: “I never let my schooling interfere with my education, and I don’t think it’s the paper that makes the Rabbi,” he explains.

“When I finished university, more than the diploma or the degree was the knowledge that I actually learned something during my time there,” he says.

“Everyone is a student and everyone is a teacher – we just need to learn to open up to the teachings of others,” he says.

While at first, those who opposed him could be discouraging, as he receives recognition from those he respects, the more his belief in himself and his cause grows.

He also faces the ultimate obstacle of the internet: trolls. From antisemitic and anti-Israel comments, to those who rail against him for his forceful claims against Christianity, Liad is not without his opponents.

But he believes in giving people second chances, which is why even if he blocks a troll during a Periscope to avoid disrupting the scope, he will always unblock them to give them another chance to hear his lessons.

However, Liad continues going because he sees the impact of his teachings on his followers. More than once, he’s helped suicidal people and those without hope make it through their despair for a few more hours until they can see the light.

And his commitment to his fans grows stronger as he realises the difference his lessons make in his listeners’ lives.

He’s also been the impetus for many of his followers to convert to Judaism. As Jasmine Munn-McDonnell says, “While I know I would have ultimately converted to Judaism, I am seriously so thankful because I wouldn’t be doing it right now if it weren’t for Liady’s words.”

She explains, “I’ve always had a Jewish leaning, but I live in Adelaide, Australia, where the Jewish community makes up approximately 0.08 per cent of the population. Apart from meeting with a rabbi once or twice, I had been nervous to explore Judaism in the non-virtual world.”

Technology allowed her to connect with Judaism in a very tangible way, one of which was through Liady’s lessons. “It was by chance that I stumbled across Rabbi Liady on Periscope before he made Aliyah, and I am so thankful that I did. As well as providing thought-provoking and invaluable lessons, Rabbi Liady gave me the push and the confidence I needed to reach out to my local Chabad. Rabbi Liady’s positive influence extends far further than just his virtual temple.

Just as you can’t know sunshine without knowing rain, or happiness without sadness, Liad is so tuned in to the connecting powers of technology because he lived without that connection for so long.

Prior to becoming a Periscope star, he had spent the past two years living in relative isolation, far from the world of smartphones and hashtags.

As covered in a story about Liad in the Jewish Journal, after college, he traveled to Southeast Asia and South America, living in Chabads, pursuing spiritual studies in Jewish mysticism and yoga, and pretty much cutting himself off from life back home.

When he returned, more than a few of his friends and family thought he’d gone off the deep end.

The California frat boy they had sent off had come back transformed into a religious zealot – and they didn’t know what to make of it.

“Of course it was difficult, without my family and friends support,” Liad says. “But that’s where Periscope saved me.”

When he returned, he was wary of smartphones and social media.

“I was living for too long purely in the spiritual realm,” Liad explains. “I couldn’t see the amazing ability of technology as a platform for spreading Judaism.”

The struggle between the spiritual and the modern has long been familiar to Judaism, but teachers like Liad are showing that, used correctly, technology can be a powerful medium for fulfilling a higher purpose.

About the Author
Aimee Millwood is the blog manager at Yotpo and co-founder of Mashu Designs. She writes for Entrepreneur, Tech Crunch, The Next Web, and more.
Related Topics
Related Posts
Comments