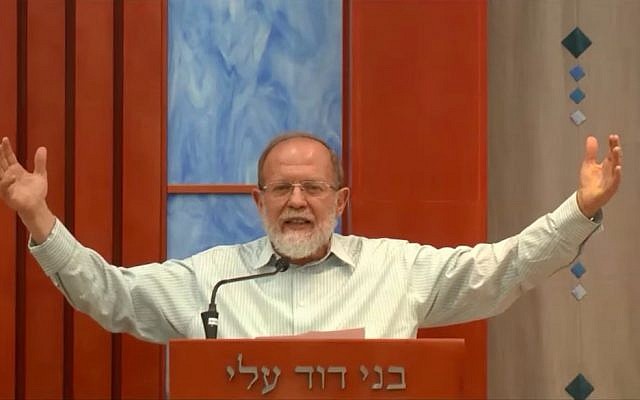 I spend much of my time dealing with issues of women and Judaism: the issues we face, the ways we contribute, the policies that fail us. In the past few weeks, I’ve been privileged to sit for hours interviewing women who study halacha in depth. Religious, halachic women who have dedicated years of their lives to the study and teaching of Torah, even as they raise families and work to support them. Because they love it, because they want to make Judaism better, because people who would not approach anyone else come to them to connect to Judaism.

So, when I finally listened to the audio of a class given by Rabbi Eli Sadan of Bnei David Yeshiva in Eli, the well-loved and highly prestigious National Religious academy, where young men learn Torah and prepare for the army, I was shocked.

Rabbi Sadan dedicated his class, which was presented as a pre-marriage preparedness class, to women’s roles. In it, he decries feminism as ruining women for marriage, because feminism promotes the notion that women should not be financially dependent on their husbands. He explains,

Teaching a woman to be self-sufficient and have a sufficient income ruins her ability to be a good wife and mother. Girls from the age of 4 should be taught that the holiest thing they can do is to marry and bear children.”

As someone surrounded by women who work outside the home and are dedicated wives and mothers, I struggle to relate to this statement. I cannot understand what he means or to whom he refers.

Which women are being ruined? Which women are incapable of being wives and mothers because they have independent incomes? Moreover, given how many women (and their children) are left in precarious financial situations after a failed marriage, illness, or death, not to mention how many give up their financial rights just to secure a divorce, this statement is irresponsible in the extreme.

Rabbi Sadan does acknowledge that some women are left widows or agunot (women denied a “get,” or religious divorce), but says that these instances are the “bediavad” — situations that occur as a result of something tragic and not the ideal.

At this point, I expected him to speak of the need to eliminate these situations, to find systemic solutions to reduce the number of women left agunot, unable to remarry and have children.

Instead, the rabbi went on to say that “we cannot build society on the bediavad” — meaning that just because some women are left unable to support themselves and their children due to death or abandonment does not mean that we should create a system where women are taught to be self-sufficient. Rather, “society should support these women and children,” i.e., they should live on charity.

A woman’s role, according to Rabbi Sadan, is not to fight, to go to battle — not in the army, not through a career, and not as a Torah scholar. Her focus must be the family.

Someone needs to build the home, not just do the windows and make the chicken — though that’s also good — but a man needs to come home to a different environment for his health and his soul. This, a woman knows how to do much better than a man… She makes the happiness and light in the house… The crime and evil of modern feminism is taking these special things from a woman. Her husband loses and the future generations lose.”

And I wonder, where are these damaged women to whom he refers? What is he seeing that I am not? Where are these hordes of women, ruined for marriage, unable to make a proper home and abandoning their children in favor of a career?

Where is this crisis he screams of? Because I do not see it.

According to Rabbi Sadan, learning Torah is also a form of battle.

A woman is not forbidden from learning Torah. If a woman loves and is familiar with Torah and the children will absorb it, great! But to strive in Torah is something else… it demands warrior-like traits… and a woman’s specialty is peace.”

I have learned from women scholars. I have been in their homes. I can tell you their homes are warm, full of love, life, and sefarim (holy books). Their words and hearts exude holiness. And yes, they are warriors too. They are warriors for their people, their children, for God and for Torah.

They learn because it calls to them. Because Torah, God, Judaism and Halacha is the light to which they gravitate. Far from ruining their homes, they build them together with their husbands — who fully support their “struggle with Torah” — creating families immersed in Torah and faith, teaching and working to make the community better, stronger, more just.

It is tragic that Yeshivat Eli, a beacon of excellence and premier academy in the Religious Zionist world, preaches extreme models of gender roles, to the extent that one partner is expected to shoulder the entire emotional burden of the family and the other must battle his days away.

How much better to build a home together, in the way that suits each couple best? How painful and restrictive to those who do not fit Rabbi Sadan’s vision of acceptable gender roles. How terrible that his approach ensures that tragedies, bad enough in and of themselves, will also mean reliance on charity.

It might be hoped that this class, recorded four years ago, reflects an aberration in a normally balanced and healthy education. But recent statements by other Eli rabbis and a publication this past Shabbat in Makor Rishon shows otherwise. Rabbi Yigal Levenstein co-head of Bnei David published a 16 page pamphlet, in which he expounds on Rabbi Sadan’s rigid ideas of gender roles, and decries women having careers as the end of Jewish marriage.

Again, his assertions are astounding and puzzling. Few are the men whose salaries are sufficient to support the large families expected of a National Religious couple. Given that financial stress is a major cause of marital strain, and that self-actualization is good for all people, women who chose to work in fulfilling careers are an asset to a healthy family.

I simply cannot see the future of Judaism in the Rabbi Sadans and Levensteins of the world, who focus on false boogeywomen and nonexistent threats to the Jewish family, while ignoring the very real needs of the Jewish community.

I do, gratefully, see the future of Judaism in women learning Torah, girls who ache to do more, and the rabbis who work to include them in all ways possible, while maintaining the integrity of the Jewish tradition that we all love.